Talking about the roya (coffee rust) epidemic in El Airo, a rural community in southern Loja province in Ecuador, brings back bad memories to the minds of local coffee growers. In 2010 and 2011, this fungus devastated coffee plants all over the province, plunging  farming families into poverty and forcing many of them to leave.

"We lost everything. I had to emigrate to Spain to provide for my family. I was there until 2015. Those were very tough years," says Wilson Rojas, promoter for the Diversification of the Rural Family Orchard project, run by Aprocairo (High Altitude Coffee Organic Producers and Commercialization of El Airo's Agricultural Products Association).

This is one of the micro-projects financed by IFAD in Ecuador  through the Good Living in Rural Territories Programme.

IFAD is dedicated to providing finance to help poor rural people escape poverty. Recognizing that coffee could still be a lucrative crop, IFAD provided funding to El Airo's smallholder farmers to help the industry get back on its feet again. With the right investment and support, rural areas can generate opportunities and jobs—and people like Wilson Rojas can return home.

Wilson, aged 55, is a community leader. He and the association's administrator, Alex Jiménez,  combine experience and youth, and have managed to motivate their colleagues to move forward with Aprocairo's objectives.

Alex, aged 27, joined the organization in 2012. He started out as secretary, but his leadership and capabilities led his colleagues to appoint him administrator. He got to know all the coffee growing processes, from production to commercialization, and the history of this small producers’ group. Together they have risen from adversity to become an organization with a sense of community and vision of the future.

"The roya epidemic was a very hard situation, but we managed to overcome it through unity. The project arrived at the right time and it has been a huge incentive. We have achieved our goals and gone even further," he says as he guides us through the food processing plant the association has set up.

The plant works not only with coffee, but also with a variety of other vegetables El Airo's farmers produce. It provides 15 non-farming jobs (at the plant, a small shop and restaurant, and in transportation) for Aprocairo members, in addition to 190 farming jobs.

Alex is convinced that what they have learned thanks to the project will remain with them, since the results are noticeable and replicable. "If you see someone is doing well by using new ways of cultivation, you imitate them. We have the desire to keep on improving," he says.

Wilson agrees: "Things have changed and so have we. The coffee plantations are now well ordered and this makes it is easier to harvest. The plants that we sow are now healthy and produce more, and that has enabled us to leave the crisis behind". 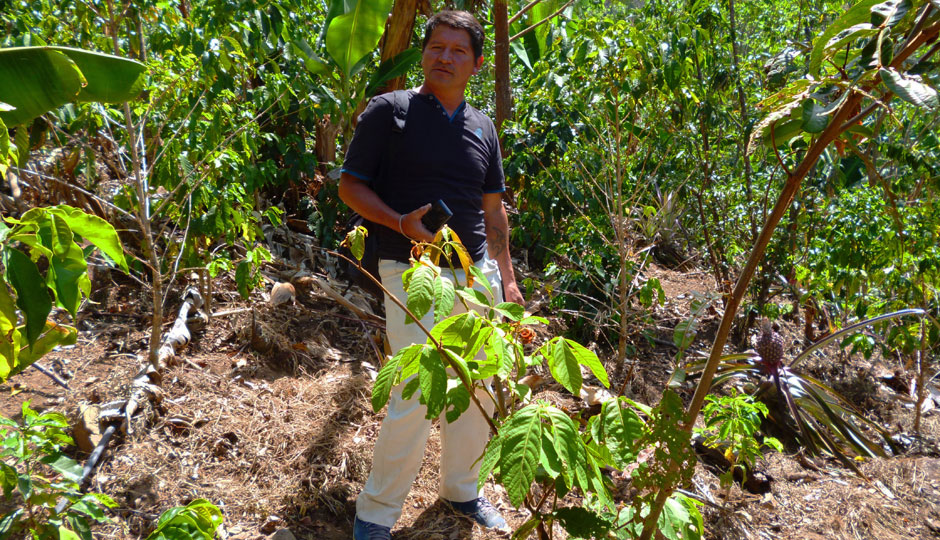 For him, the project has meant not only a transformation of the way he produces, but new job perspectives. After being selected as promoter, he acquired new skills that will now allow him to offer his services in other organizations and territories.

Aprocairo's partners are hardworking and cheerful women and men. In addition to improving coffee harvesting methods, the project has trained the association members in diversifying their crops – a way to prevent another roya epidemic from knocking them out financially again.

The food processing plant they have built allows them to place their products directly in the market without depending on intermediaries. The community of El Airo has placed high hopes in the plant. Wilson dreams of his daughters and sons taking over and working there. "Everything we have done is for them, so that they have a better life. They will have to work hard nonetheless, but they already have this processing plant of theirs, "he says.

The smell of El Airo coffee invades the processing plant office. Wilson and Alex reflect on the positive changes they have experienced due to the project. For the both of them, the will to stay on the land is the greatest transformation.

The project gave Wilson the opportunity to return from Spain. Its success has made him determined not to leave the country again. "There in Murcia, Spain, they treated me well and I learned many things, but nothing compares to your own land, family and long-time friends. With our current coffee production, the processing plant and the investments we've made, now I know that I will not leave El Airo anymore," he says.

Alex recalls that in the five years he has been working with Aprocairo, he has learned "things I wouldn't have even imagined": machine operations, export procedures, coffee tasting, accounting and even some designing, as well as everything about production and processing.

"The most important thing is I've changed my way of seeing life. Before, I hadn't this love for the land, nor did I realize that cultivating could generate resources and improve my life and that of many more people. Now I can see the impact agriculture can have on so many people's life. I'm going to stay here," he says with conviction.