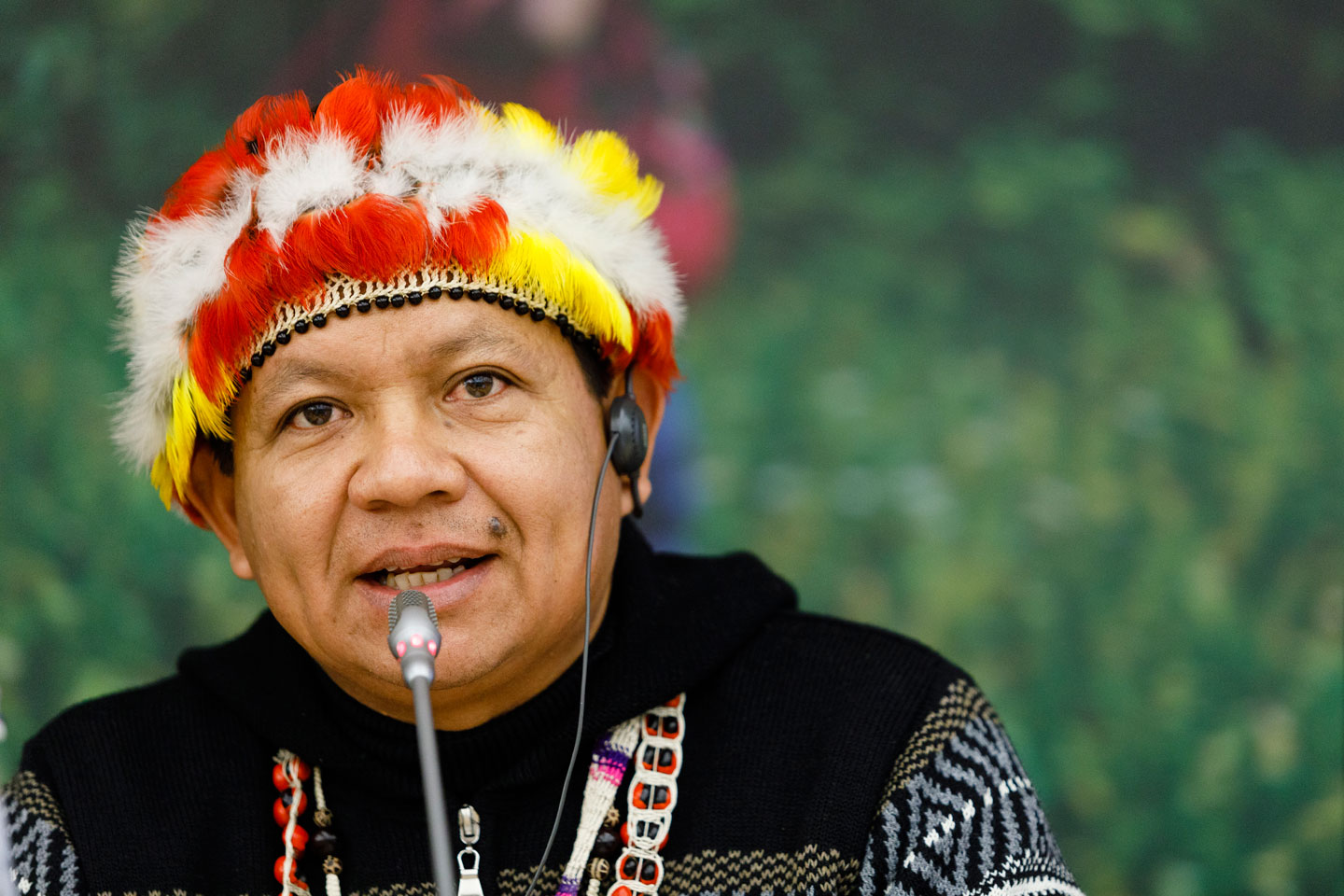 Against the backdrop of the climate crisis, José Gregorio Diaz Mirabal, Coordinator of the Congress of Indigenous Organizations of the Amazon Basin (COICA) visited IFAD in Rome, where he discussed the situation affecting the Amazon and the implications for indigenous peoples’ livelihoods and for humanity as a whole.

The Amazon is by a large degree the world's biggest rainforest, covering around eight million square kilometres. It is an exceptional environmental resource, as it takes up 25 per cent of the world’s carbon dioxide absorbed on land and it is one of the biggest biodiversity hotspots of the world. According to COICA, they represent 511 indigenous peoples’ communities living in the Amazon, and protect 66 uncontacted and voluntarily isolated tribes. Indigenous peoples have local traditional knowledge that helps them to live in the rainforest.

Gregorio was in Rome to participate in an unprecedented Synod at the Vatican with Pope Francis, where discussions focused on solutions to the ecological and social problems of the Amazon, emphasising the importance of engaging indigenous peoples from the region.

The Amazon has recently been the centre of international attention after an increase in the number of fires in the region sparked fears for its safety.

Gregorio highlighted how indigenous peoples in the region are struggling with a landscape of mega-infrastructures, extractive industries and the burning of the Amazon forest:

“Mother nature is currently giving an urgent cry, given the violence she has been put through by current development models that are based on the violation of her rights, but we are here to stand up for Nature“.

The expansion of large-scale unsustainable farming and extractive industries also poses a constant threat to the livelihoods of indigenous peoples, by destroying their territories and resources.

“As we were travelling to the Synod, our indigenous brothers were arriving in Quito. Around 30 thousand of them. We were worried about violence and the state of emergency; we were worried for our families, our friends from the Amazon, from the highlands, the workers, the women, the youth - our first call in the Synod was a call to stop violence.”

Gregorio conveyed a message to IFAD and to all academic and economic institutions to address scientific and economic resources and implement urgent, coordinated, and sustainable actions.

“We are here to bring a message of urgency but also of hope. We believe that we can find people around the world who will join our mission to protect the Amazon. We welcome you to this dialogue and to develop together actions in favour of the Amazon”.

Gregorio and COICA’s commitments on climate action are strong. Indeed, indigenous peoples are among the first to face the direct consequences of climate change, due to their dependence upon, and close relationship with, the environment and its resources. IFAD recognizes their role in responding to climate change.

Gregorio took part in the last global meeting of the Indigenous Peoples’ Forum at IFAD, a unique initiative within the UN system. In 2019, it focused on promoting indigenous peoples’ knowledge and innovations for climate resilience and sustainable development.

The Forum aims to improve IFAD’s accountability and enhance its development effectiveness through consultations with indigenous peoples’ representatives at the national, regional and international levels.