An IFAD-supported project in Kenya is planting over two million trees to help rural communities combat the threat of drought.

Drought threatens much of East and Southern Africa, putting farmers’ livelihoods at risk.

But with IFAD funding, communities in Kenya are growing trees to help safeguard their future.

In the Embu district - 130 km northeast of Nairobi - recent droughts  are not only hurting farmers but the area’s forests too.

Along with pressures like deforestation, population growth and flash floods, forest cover stands at just 7.8 per cent - well below the government target of 10 per cent.

But IFAD and its partners in Embu, are working to reverse this trend.

The IFAD-supported Greening Schools Initiative (GSI) has been operating since 2012, and is teaching a new generation how to plant and care for trees.

“I cannot believe it. When I was here five years ago, it was all brown and deserted – not a single tree,” said Paul Njuguna, IFAD’s project specialist. “Now look at it,  lush and green. It’s fantastic.”

The difference five years makes to the school fields.

Trees are extremely important in Kenya. They help protect farmland from the flash floods that can wash away fertile soil. They also provide shade for crops to grow and are an important source of fuel, timber and income.

The trees provide shade for students at lunch.

In 2012, an IFAD video maker visited the village of Kambaru to make a short documentary about the project and see how the GSI’s messages on conservation were being taught in schools. At the time, the video maker met 12-year-old student Morris Kaburo.

Kaburo still remembers the trees he planted, and prunes them when he can.

Morris was learning about reforestation, and in turn, sharing these lessons with his grandfather.

“I still love coming back to this school whenever I visit my grandparents,” Morris said. “I know all the trees I planted when I was here, and I feel like a hero when I see these huge trees I created. It’s a great feeling.”

Through the GSI, it’s hoped that young people will become more aware of the environment they live in, and play an important role in teaching their own communities about conservation.

Over the past five years, the project has been rolled out to 1,706 schools across Kenya, and a further 266 are set to join soon.

Students are taught how to plant, prune and care for trees. The oldest children mentor the youngest, and train others in what they’ve learned.

They learn practices like “spot-weeding” and how to water plants in semi-arid areas.  Pruning is particularly important and helps communities reduce their fuelwood consumption. 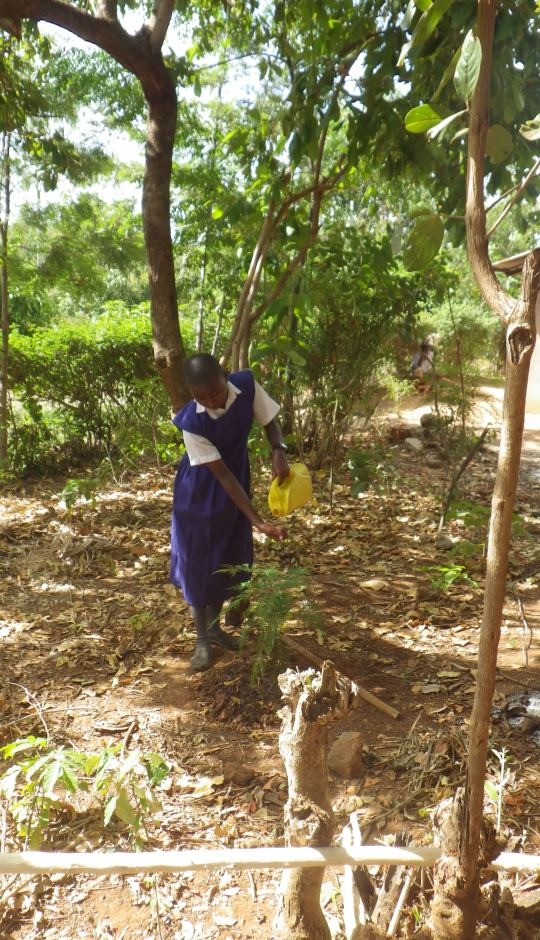 A student demonstrates the spot weeding and watering techniques she has learned.

Since learning about pruning five years ago, Morris’s grandfather Adriano has not cut down a single tree, and rarely has to travel far to find wood for fuel.

So far, the GSI has helped plant almost two million trees, across schools and farms. The trees have a survival rate of 75 to 90 per cent.

Now the success of the project has attracted the attention of the national government,  and even the support of Kenya’s First Lady.

And as it’s set to reach every school in Kenya, the country is well on its way to achieving 10 per cent forest cover by 2030.