The project's rationale is rooted in the particular situation of Bangladesh, one of the poorest countries in South Asia and one that is particularly affected by the current adverse climate conditions. In addition to addressing climate change effects, the Coastal Climate Resilient Infrastructure Project will also meet the needs of rural producers, especially poor and small producers, who suffer from two main constraints that limit development of their livelihoods:

The project will be implemented in 32 upazilas (sub districts) of 12 south-western districts: Barguna, Barisal, Bhola, Jhalokati, Patuakhali and Pirojpur Districts in Barisal Division; Gopalganj, Madaripur and Shariatpur Districts in Dhaka Division; and Bagerhat, Khulna and Satkhira Districts in Khulna Division. These districts are known to be very poor, least developed and vulnerable to natural disasters such as tidal surges, cyclones and floods.

The target group comprises the population in the catchment areas of project markets and roads, in particular small and marginal farmers, small traders and microentrepreneurs, landless people and poor women. It is estimated that 3.5 million people will benefit from the project. 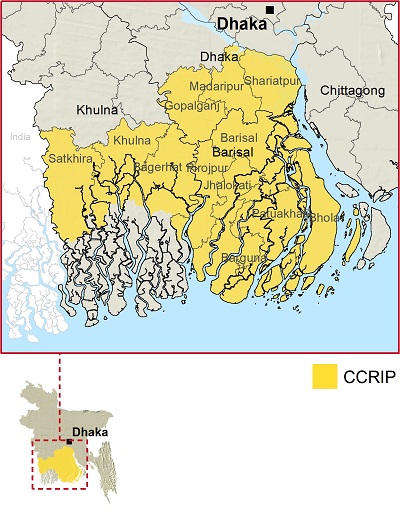 أبريل 2019
Farmers in southwestern Bangladesh, an area prone to natural disasters, are sometimes unable to reach community markets in the monsoon season.