The fifth global meeting of the Indigenous Peoples' Forum at IFAD taking place on 2, 3, 4 and 15 February 2021, will focus on the value of indigenous food systems: resilience in the context of the COVID-19 pandemic.

The Forum is a platform for meaningful dialogue where Indigenous Peoples’ representatives convey their concerns, requests and recommendations to improve the partnership with IFAD and the effectiveness of its engagement with Indigenous Peoples.

Side events and the Indigenous Peoples’ virtual film festival will take place during Indigenous Week from 8 to 12 February.

The main outputs of the fifth global meeting of the Indigenous Peoples' Forum at IFAD are:

Summary report of the regional consultation meetings held in Africa, Asia, Latin America and the Caribbean, and the Pacific

Message from His Holiness Pope Francis

A decade of IFAD’s engagement with indigenous peoples

Policy brief: Partnering with indigenous peoples for the SDGs

Associate Vice-President, External Relations and Governance Department, IFAD
Marie Haga is Associate Vice-President of the External Relations and Governance Department at IFAD. She is responsible for communications, global engagement, partnerships, resource mobilization and relations with IFAD Member States. Haga has extensive experience in conservation, food security, foreign affairs and politics. Before coming to IFAD she worked with the Global Crop Diversity Trust, where she was Executive Director from March 2013.

Samburu Women Trust
Jacqueline Macharia is the Coordinator for the Indigenous Peoples Assistance Facility (IPAF) in Africa at Samburu Women Trust. She has been managing the Facility in Africa since 2013. She is a passionate supporter and advocate for Indigenous Peoples in the continent. She is currently studying Sustainable Development at Columbia University in the City of New York.

President of IFAD
Gilbert F. Houngbo became the sixth President of the International Fund for Agricultural Development (IFAD) on 1 April 2017. Born and raised in rural Togo, Houngbo has spent more than 30 years working to improve the lives of some of the world’s most vulnerable people, with extensive experience in political affairs, international development, diplomacy and financial management.

Member, Steering Committee of the Indigenous Peoples' Forum at IFAD, Asia and the Pacific
Joan Carling is an indigenous activist from the Cordillera (Philippines) working on indigenous issues at all levels for more than 20 years. (2008-2016). Carling has been appointed by the UN Economic and Social Council as an indigenous expert of UNPFII (2014 – 2016), former Secretary General of the Asia Indigenous Peoples Pact (AIPP), and member of the Advisory Council of the Cordillera Peoples Alliance.

International Indigenous Women's Forum
Indigenous woman of the Zenú people, born on the northern coast of Colombia. She is a psychologist and specialist in international cooperation and project management for development. Since 2009, she is the coordinator of Seeds and IPAF projects of the AYNI Fund, a programme of the International Indigenous Women's Forum - FIMI. Working for the individual and collective rights of indigenous women in Africa, Asia, the Pacific and the Americas.

Tebtebba Foundation
Ruby Bangilan-Española is the coordinator of the IPAF in Asia-Pacific at Tebtebba (Indigenous Peoples’ International Centre for Policy Research and Education). She is an indigenous woman from the Cordillera region of the Philippines.

Director, Environment, Climate, Gender and Social Inclusion Division, IFAD
Jyotsna Puri is the Director of the Environment, Climate, Gender and Social Inclusion Division (ECG) at IFAD. Puri has worked previously at the Green Climate Fund, 3ie, UNEP, the World Bank and UNDP. She has also been adjunct associate professor at Columbia University, New York where she was also a research scientist. She holds a PhD and MSc in Agriculture and Resource Economics and an MA in Development Economics.

Member, UN Permanent Forum on Indigenous Issues
Elifuraha Laltaika is member of the UN Permanent Forum on indigenous issues and the founder of Association for Law and Advocacy for Pastoralists (ALAPA) based in Arusha, Tanzania. He works with Tumaini University Makumira in Arusha, where he teaches International Law, Human Rights Law and Constitutional Law. Elifuraha recently served as a visiting scholar at Stellenbosch Institute of Advanced Study (STIAS) in South Africa, to work on a project entitled Legal Protection of Hunter-Gatherer Groups’ Land Rights in Central and Southern Africa.

Member, Steering Committee of the Indigenous Peoples' Forum at IFAD, Asia and the Pacific
Joan Carling is an indigenous activist from the Cordillera (Philippines) working on indigenous issues at all levels for more than 20 years. (2008-2016). Carling has been appointed by the UN Economic and Social Council as an indigenous expert of UNPFII (2014 – 2016), former Secretary General of the Asia Indigenous Peoples Pact (AIPP), and member of the Advisory Council of the Cordillera Peoples Alliance.

Member, Steering Committee of the Indigenous Peoples' Forum at IFAD, Asia and the Pacific
Jesús Amadeo Martinez is a member of the Steering Committee, Senior Advisor of the Indigenous Council of Central America (CICA) and representative of the Salvadoran National Indigenous Coordinating Council (CCNIS). He belongs to the Lenca people living in El Salvador and Honduras. Exercising his career as a lawyer he also served as Chairman of the IDFAC Commission on Standards and Human Rights and FAO Focal Point for the Abya Yala Forum for Latin America and the Caribbean.

Director, East and Southern Africa Division, IFAD
Sara Mbago-Bhunu is the Director of IFAD’s East and Southern Africa Division. Mbago-Bhunu brings to IFAD rich work experience spanning more than 20 years in the agriculture sector across Central, East and Southern Africa. She has worked on agriculture policy and sector reviews, value chain development, access to agricultural finance, social enterprise models and the promotion of small and medium-sized enterprises in peri-urban and rural areas. She has also led and managed teams in other development organizations in the design of development projects and capacity-building programmes. Prior to joining IFAD, Mbago-Bhunu worked at the World Bank as a Senior Agricultural Economist for the Central African Republic, the Democratic Republic of the Congo and the Republic of Congo, based in Kinshasa. From 2013 to 2016, she served as Country Director for SNV-Netherlands Development Organisation in the Democratic Republic of the Congo.

Director, Asia and the Pacific Division, IFAD
Nigel Brett is the Director for the Asia and the Pacific Division at the International Fund for Agricultural Development (IFAD). Prior to this position, Brett worked as Lead Portfolio Advisor in the Asia and Pacific Division. He also worked as an IFAD Country Programme Manager for 16 years where he managed many diverse country programmes including IFAD’s largest programme in India. Before joining the fund, Brett worked as an environmental specialist for Mott MacDonald, a global engineering, management and development company. Brett has extensive field experience in Bangladesh, Cambodia, Colombia, Guyana, India, Lesotho, Mali, Nepal, Pakistan, Rwanda, Suriname, Tajikistan and Vietnam. Brett holds an M. Phil degree in Environment and Development from Cambridge University and a B. Sc. degree in Environmental Science from the University of East Anglia.

Director, Latin America and the Caribbean Division, IFAD
Rossana Polastri is the Regional Director for the Latin America and the Caribbean Division (IFAD). Appointed in January 2019, Polastri brings to IFAD a wide and diversified work experience as Peru’s Vice-Minister for Finance and, more recently, as Vice President and Executive Board Member of the Bank of the Nation of Peru, (Banco de la Nación). She has also worked for the World Bank as Country Manager for Paraguay and as Advisor to the Development Economics Vice Presidency. Polastri, a national of Peru, holds a Master's Degree in Economics from the Polytechnic Institute of Virginia State University, United States, and a Bachelor's Degree in Economics from Universidad del Pacífico, Lima, Peru.
Day 3

Member, Steering Committee of the Indigenous Peoples’ Forum at IFAD, Asia and the Pacific
Read Bio

Member, Steering Committee of the Indigenous Peoples’ Forum at IFAD, Asia and the Pacific
Read Bio

FAO Indigenous Peoples Team
Yon Fernandez-de-Larrinoa is the Team Leader of the FAO Indigenous Peoples Team. An Agricultural Economist from the UAM of Madrid with a MABD on entitlements and food security. He joined FAO in 1998, having worked in Asia, Latin America and Africa. Before joining the Partnerships and Advocacy Division in 2010, he coordinated emergency relief operations for FAO at the Haiti Earthquake; H5N1 Influenza; and Asian Tsunami. Yon has lead the introduction in FAO’s work of Free Prior and Informed Consent (FPIC).

Co-chair, GIYC
Victor Lopez-Carmen, a member of the Crow Creek Sioux Tribe in South Dakota and the Yaqui Tribe in Arizona and Mexico, campaigns for human rights at an international scale. He is a Co-Chair of the U.N. Global Indigenous Youth Caucus and MD student at Harvard Medical School.

Member, UNPFII
Hindou Oumarou Ibrahim is an indigenous Mbororo woman from Chad. She is expert in indigenous peoples’ adaptation to climate change, traditional ecological knowledge, and climate change mitigation strategies. She is member of UNPFII and has been the Co-Chair of the International Indigenous Peoples Forum on Climate Change during COP20, COP21, COP22, COP23, that lead to a significant recognition of indigenous peoples’ role in the fight against climate change. She founded the Association for Indigenous Women and Peoples of Chad (AFPAT).

IFAD Special Senior Advisor Food Systems Summit
Christine Ciccone is the IFAD Special Senior Advisor Food Systems Summit in the External Relations and Governance Department. Previously she has worked as Assistant Secretary leading the U.S. Department of Homeland Security (DHS) Office of Legislative Affairs. She is a graduate of the University of New Hampshire where she obtained a B.A in Political Science. She also holds a J.D. from George Washington University, and an M.A. from the United States Naval War College in National Security and Strategic Studies.

Indigenous Terra Madre Advisory Board Member
Dalí Nolasco Cruz, from the Nahua peoples of Tlaola, Puebla, is an active member of Slow Food in Mexico for the defence and promotion of Creole seeds, food, territories, and indigenous biodiversity. She is the leader of the Slow Food Tlaola Kukuk Convivium and coordinator of the Tlaola Serrano Chili Pepper Slow Food Presidium. She is the Director of the Timo’Patla Intercultural Organization A.C. and Mopampa, a network of social and solidarity economy companies of indigenous women. Furthermore, Dali facilitates trainings for women, youth, and children on topics including rights, gender, and interculturalism.
Day 4 - Monday, 15 February 2021

Associate Vice-President of the Strategy and Knowledge Department, IFAD
Meike Van Ginneken is the Associate Vice-President of the Strategy and Knowledge Department at IFAD. Prior to joining IFAD in October 2020, van Ginneken was Chief Executive Officer of the SNV Netherlands Development Organisation, a leading development organisation with 1,400 specialized staff working on agriculture, energy and water in 28 countries in Africa, Asia, and Latin America. She holds an MSc in change management from HEC Paris Business School in France and an MSc in water management from Delft University of Technology in The Netherlands.

Vice-President of IFAD
Dominik Ziller is Vice-President of IFAD. Prior to joining IFAD, Ziller was Director General for International Development Cooperation for International Development Policy at the German Federal Ministry for Economic Cooperation and Development. His responsibilities included the European Union's development cooperation, United Nations, World Bank Group, regional development banks, OECD, development processes of the G7 and the G20. He holds a Law Degree from the Ludwig Maximilian Universität München and Practical Law Degree from the Federal German State of Bavaria.

Associate Vice-President, Programme Management Department, IFAD
Donal Brown is Associate Vice-President, Programme Management Department, at IFAD. He is responsible for developing and managing the operations that IFAD supports through its loans and grants. He oversees the programme of work of the department, which is undertaken by five Regional Divisions and the Operational Policy and Results Division.
More

Indigenous food systems are at the heart of resilience

Indigenous knowledge – and resilience – in a COVID-19 world 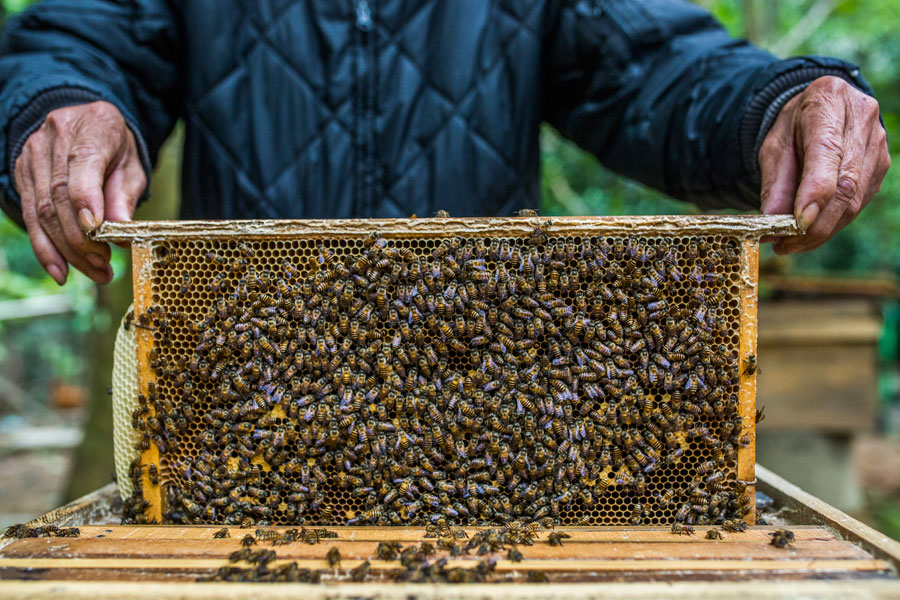 Sign up for our bi-weekly email updates to receive up-to-date information on IFAD's work, research, and the latest agricultural news.