Annual Report on the Results and Impact 2009

This is the seventh Annual Report on Results and Impact of IFAD Operations (ARRI)  prepared by the Office of Evaluation (OE). It presents a synthesis of the main results and impact from evaluations conducted by OE in 2008. As in past editions and as agreed with the Executive Board, the ARRI also includes dedicated sections on two learning themes: (i) access to markets; and (ii) natural resources and the environment.

The seventh ARRI includes three new features. First, in addition to providing an account of  the results achieved based on the evaluations undertaken in 2008, the ARRI analyses the three-year moving averages, starting from 2002, of the performance of IFAD operations. The use of moving averages allows for the assessment of trends in performance over time, and also rectifies any biases that may result from the sample of projects evaluated, which are not chosen on a random basis.

Second, it contains a quality-at-entry review. The main aim of this section is to assess the extent to which IFAD management is learning from previous operations and addressing the key areas of challenge identified in this and past ARRIs in new activities financed by the Fund. This section also serves to develop the ARRI one step further, by providing an assessment of recently approved activities, in addition to the traditional account of past operations.

The third aspect is that the 2009 ARRI is built on evaluations undertaken in line with the provisions contained in the new evaluation manual, which was considered by the Evaluation Committee1 in December 2008. One change in the ARRI – in accordance with the new manual – is the reduction in the number of domains covered by rural poverty impact criteria from nine to five. Another change brought about by the new manual is a more comprehensive definition of relevance.

Included in chapter VII is a brief review of the ARRI itself. In preparing this seventh edition, OE undertook a comparative analysis of annual reports similar to the ARRI produced by evaluation outfits in other development organizations. The main aim of this review is to identify features that might be of interest to IFAD for inclusion in the ARRI in the future.

This year for the first time the ARRI includes the calculation of moving averages using the entire ARRI data set since 2002. The three-year moving average analysis reveals, on the whole, a steady upward trend in results across all but a few evaluation criteria. This upward trend is further corroborated by the analysis of project performance by date of loan effectiveness, which confirms the hypothesis raised in past ARRIs that more recent projects and programmes perform better than older generation operations. These positive trends merit emphasis, and reflect the considerable efforts by the institution to implement far-reaching reforms and renewal over the past decade. 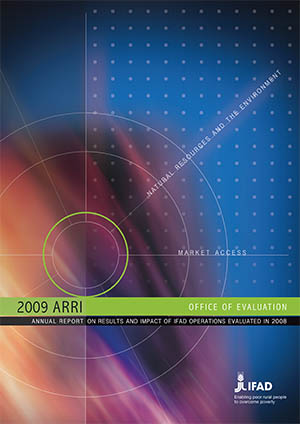 Natural resources and the environment
Access to markets
Summary PDF