Annual Report on the Results and Impact 2010

This is the eighth Annual Report on Results and Impact of IFAD Operations (ARRI) produced by the IFAD Office of Evaluation (IOE). It presents a synthesis of the results and impact of IFAD-funded operations, and raises systemic issues and lessons learned that can contribute to further improving performance in the future.

This year’s ARRI has devoted particular efforts to summarize the reasons for stronger or  weaker performance (the why question), as derived from recent and earlier evaluations. It includes a new section, derived from country programme evaluations, on the performance of non-lending activities, and a more disaggregated analysis of performance using all six ratings, rather than the two broad categories of satisfactory and unsatisfactory.

However, emphasis continues to be placed on the trends in the three-year moving averages, rather than on evaluation data from one single year. That is, caution should be exercised in drawing conclusions about performance from a single year of evaluation data, as well as in making comparisons of the evaluation ratings from one year to another. This is because the sample of projects evaluated by IOE in a given year is relatively small and not chosen on a random basis. Using a three-year moving average however allows for the assessment of trends in performance over time, and helps smooth out biases that may result from the sample of project evaluations not chosen randomly.

As in the past, the ARRI is mainly based on evaluation of past projects. Therefore, it is fair to note that the assessment contained in this year’s ARRI may not necessarily reflect the type and performance of projects designed more recently. This is most probably the case of projects that were analysed in the moving averages calculated for all evaluation data from 2002 up to around 2006. However, the ARRI also provides an appreciation of the performance of more recent operations based on the analysis of 44 projects that were  evaluated in 2007-2009, which is the most recent point in the three-year moving averages of the entire data set used as a basis for the ARRI. Finally, in an attempt to provide a more “real time” perspective in its analysis, this year’s ARRI assessed the relevance of  selected recent country strategic opportunities programmes (COSOPs) and project designs. The analysis reveals that IFAD is learning from the past, as more recent COSOPs and projects have more realistic objectives and are more results oriented than older operations 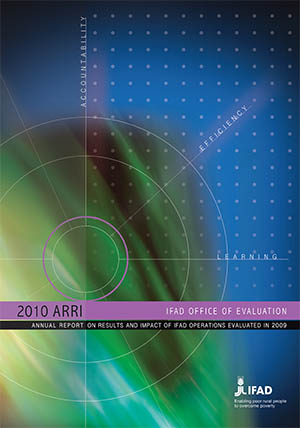