Annual Report on the Results and Impact 2012

This tenth Annual Report on Results and Impact of IFAD Operations (ARRI) presents a review of evaluations completed in 2011, with particular emphasis on highlighting what has changed since the first ARRI in 2003. The overall picture that emerges is positive, but with room for improvement, especially in light of the collective aim to transform the organization from generally moderately satisfactory performance to satisfactory, and if possible, even highly satisfactory results in the near future. On the one hand, there is evidence of clear and significant improvement across most of the criteria assessed by evaluations carried out by the Independent Office of Evaluation of IFAD (IOE). But equally, it is evident that a number of important issues identified in the early ARRIs are yet to be effectively addressed.

Three broad performance trends can be observed from the 2002-2011 project evaluation data. Ratings for two evaluation criteria – natural resources and the environment, and IFAD’s performance as a partner – have improved over the decade. A second group of evaluation criteria – sustainability, innovation and scaling up, and two rural poverty impact domains (human and social capital and empowerment, and institutions and policies) – show a marked

improvement since 2002-2004, but a more recent decline since a peak in 2006-2008. A final group of evaluation criteria – relevance, effectiveness, efficiency, and the performance of government as a partner – show flat and/or declining performance.

Three other features have not changed over the years. First, a pattern of high project relevance and reasonable effectiveness, but only moderate efficiency and sustainability. Second, the predominance of moderately satisfactory performance. Just 23 per cent of the 2011 ratings were satisfactory or better. And third, the importance of the country context. Performance in fragile states is markedly lower than in non-fragile states.

Eighteen country programme evaluations (CPEs) have been completed since 2006. These show clear improvement in all three non-lending activities since 2006-2008 – knowledge management, partnership building and policy dialogue – but little improvement in the last activity since 2007-2009. Notwithstanding improvement in knowledge management, more efforts are needed at the country level, including a larger allocation of dedicated resources for this purpose. Similarly, as underlined in most past ARRIs, it is time for serious efforts to engage more systematically with the multilateral development banks and selected United

Nations organizations at the country level, including the Rome-based agencies. 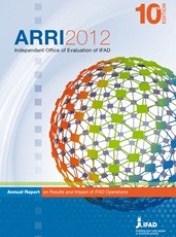