2014 Annual Report on Results and Impact of IFAD operations

The Annual Report on Results and Impact of IFAD Operations (ARRI) is the flagship report of the Independent Office of Evaluation of IFAD (IOE). The ARRI was first published in 2003, and provides an independent assessment of the performance of IFAD operations and identifies issues that need to be addressed to further strengthen results on the ground. This year's ARRI draws on a robust sample of ratings from 224 project evaluations carried out by IOE since 2002 - including 35 project evaluations undertaken in 2013. One of these is the first impact evaluation by IOE, which was carried out in Sri Lanka.

IFAD is one of the very few development organizations that produces an annual report like the ARRI, reflecting its commitment to promoting accountability, learning and transparency in reporting on results and impact.

Performance and trends
This year's ARRI shows that IFAD's performance as a partner is the best since the ARRI was first produced in 2003. The numerous changes and reforms to IFAD's operating model – in particular direct supervision and implementation support, the establishment of IFAD country offices and better portfolio management – are contributing to better performance.
Other areas of good performance include the relevance of operations and rural poverty impact, including promotion of gender equality and women's empowerment, and innovation and scaling up. In fact, rural poverty impact is moderately satisfactory or better in 90 per cent of the projects that were evaluated during 2012-2014.
This year's ARRI also analysed independent evaluation ratings grouped by IFAD replenishment periods, starting with the Fifth Replenishment (2001- 2003). Generally speaking, with the exception of efficiency, IFAD operations have performed best during the Ninth Replenishment period (2013-2015).

However, there is scope for strengthening the performance of IFAD-supported operations in some critical areas in order to achieve greater development effectiveness. Firstly, efficiency remains the weakest area, with 42 per cent of operations rated as moderately unsatisfactory or worse. Secondly, further efforts will be needed to support governments in enhancing their capacity and performance, since they are ultimately responsible for executing IFAD-funded projects and programmes. Thirdly, although there have been recent improvements, sustainability of benefits is still weak and will require greater attention.
There is scope to further enhance performance in non-lending activities, i.e. knowledge management, policy dialogue and partnerships development, which are also essential for scaling up impact.

The ARRI finds that the performance of IFAD operations is on par with or better than the performance of the Asian Development Bank (ADB), African Development Bank (AfDB) and World Bank agriculture operations. When interpreting these findings, the different nature and size of the organizations must be kept in mind – especially the fact that IFAD operations are normally implemented in more challenging contexts, such as remote rural areas, and give special attention to participatory approaches, gender mainstreaming, targeting and grass-roots institution-building.

Internally, the analysis revealed that the performance of IFAD operations is strongest in Asia and the Pacific Region, followed by East and Southern Africa. IFAD's operations performance is weakest in West and Central Africa, even though an important contributing factor is the relatively weaker policy and institutional context, as well as the large proportion of fragile and conflict-affected states in the region. Finally, the ARRI finds gaps in current performance based on independent evaluation ratings and IFAD's Ninth Replenishment targets for operations, to be accomplished by the end of 2015. While the gap is relatively small in some areas (relevance and impact), it is quite large in others (efficiency, sustainability, partnerships and government performance).

There are also several challenges affecting the performance of project management: delays in the appointment of, and frequent changes in, project staff; low priority given to monitoring and evaluation activities; challenges in applying the IFAD Results and Impact Management System; limited knowledge of IFAD policies and procedures; and interference by the designated executing agency. 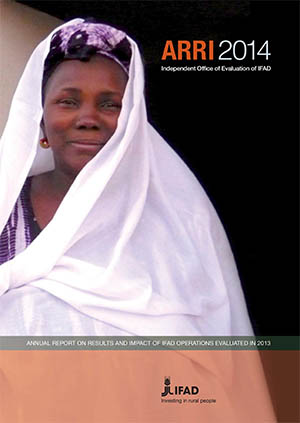