During the implementation of the Rural Income Diversification Project in Tuyen Quang Province (RIDP), in 2002–2010, Viet Nam was still undergoing the fundamental transition from a centrally-planned to a market-based economy.

After more than two decades of continuous rapid economic growth, Viet Nam was reclassified by the World Bank as a lower-middle-income economy in 2009. In tandem with economic restructuring, the Government's administrative reform devolved substantial authority for socio-economic development to subnational governments. While most parts of the country shared in this progress, the mountainous rural areas with large ethnic minority populations, including the Tuyen Quang Province, generally lagged behind.

RIDP's overall objective was to improve the socio-economic status of 49,000 poor households living in upland areas, especially ethnic minorities and women. The critical change the project intended to introduce was the enhanced linkage between small farms and markets, as well as support to crop and livestock production, building access roads to markets and providing vocational training for rural youth. The project also endeavoured to promote microenterprises with a view to moving local production up the value chain.

The design of RIDP represented a step forward in IFAD's country strategy, inasmuch as it moved away from focusing on subsistence-level agricultural production to engaging in market-oriented production and enterprise development. The present project performance assessment (PPA) describes RIDP's remarkable achievements in terms of upgrading government services for market-oriented agriculture and rural development, and advancing smallholder farmers' progress with regard to integrating with markets and eventually moving out of poverty. The PPA also acknowledges the tremendous challenges faced by the project in connecting smallholders to markets and generating employment opportunities. These challenges were the consequence of constraints – encountered during the early stages of the country's transformation into a market economy – such as lack of familiarity with market functioning and value chains, and limited private-sector investment in the province.

Project performance was assessed as satisfactory, a composite judgment based on satisfactory ratings for relevance and effectiveness and a moderately satisfactory rating for efficiency. With respect to relevance, the project design built on experience with a previous project in the province and took new steps to support market integration, which corresponded to the rising demand of project beneficiaries to address problems of limited non-farm and business market opportunities. The project also achieved synergy with the national rural poverty reduction programmes, because the approaches used in RIDP were included in the implementation guidelines for the National Target Programme for Socio-economic Development for Ethnic Minorities and Mountainous Areas. Regarding effectiveness, the project fully or largely achieved the objectives of: increasing capacity related to the decision-making process through decentralization and participation; enhancing food security and diversifying rural income opportunities through promotion of market-oriented farm and livestock production, supporting savings and credit, and building access roads to markets; improving sustainable use of forest resources by facilitating the issuance of land-use certificates to both wives and husbands; and providing support on forest land through a balance of production and protection. However, RIDP made no significant progress in microenterprise development, which evidences the challenges faced in supporting the business development services of provincial and local governments, and engaging with the private sector. RIDP's performance in terms of efficiency was somewhat less impressive in that the implementation period was extended by one year. Moreover, comparisons of the effectiveness lag and average costs per beneficiary put RIDP below the average of the country portfolio, despite experience gained with the previous project in Tuyen Quang Province.

The project's rural poverty reduction impact is rated as satisfactory based on positive performance in each impact domain.  RIDP's contribution to social and human capital and empowerment has been particularly successful in that it helped to establish institutions and build capacity for the villagers, including the decentralized commune development boards, village development boards, grass-roots level village groups, business connections with banks, increased access to markets, and schools and kindergartens. Meetings of these village groups, in particular the savings and credit groups, together with the village development boards, have gradually evolved into informal forums for villagers to share concerns and formulate requests to be discussed with government agencies.

Given in particular the provincial government's efforts to replicate the decentralization approach piloted by RIDP in small-scale infrastructure and agricultural services, sustainability is rated as satisfactory, as are innovation and scaling up. A major innovative feature of RIDP was its piloting of full decentralization at the commune level and the strong possibility that exists for replicating its training approach for rural youth. The project was very successful in meeting national targets for women's advancement and gender equality and for the empowerment of ethnic minority women for poverty reduction, which is rated as highly satisfactory.

Looking forward, two important lessons should be considered when designing future projects for Viet Nam. One lesson relates to enhancing market integration through more active involvement with the private sector and investments in building physical markets. RIDP fell short in connecting farmers to markets, particularly in building physical markets in the communes, providing marketing information support and involving the private sector in creating market opportunities, though developing partnership with the private sector was not part of the project design. As concluded by the recent evaluation of IFAD's Private-Sector Development and Partnership Strategy, in future projects, IFAD-supported projects will need to join up more effectively with the private sector to create both business connections and marketing opportunities, and to ensure a sustainable local market mechanism with the active engagement of private market participants. The second lesson has to do with the need to explore a holistic approach to the development of ethnic minorities in upland areas. In particular, it will be important to avoid treating ethnic minorities as monolithic, but to adapt programmes to the socio-cultural specifics of individual ethnic minority groups. Above all, to promote the development of these areas, the approach will need to encompass education and health services, and increased computer literacy.

Overall, the PPA found that RIDP responded effectively to the country's economic and social evolution and that the shift to support for market-oriented production and enterprise development reflected both the needs of the rural poor and IFAD's comparative advantage. In the context of the country's rapidly evolving economic development, RIDP achieved the objective of improving the socio-economic status of poor households living in upland areas. What underlay this success, among other things, was the Government's firm commitment to reducing rural poverty and advancing the market-based economy. The Government appreciated IFAD for its promotion of a participatory rural development approach and supports the project's efforts to promoting decentralization and participation. A decisive factor in the success of RIDP was that the Tuyen Quang provincial government provided strong political and financial support. Starting from 2011 a new IFAD-funded project, focusing on market integration, will cover Tuyen Quang and two other provinces. The strong government commitment bodes well for the sustainability of the key pillars built by RIDP: decentralization and market–oriented production. 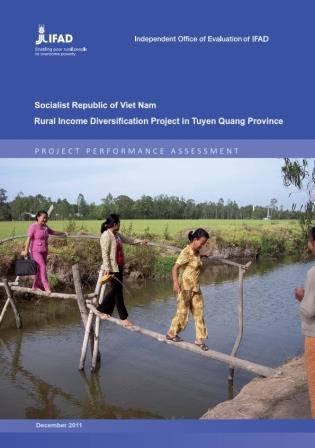