The Smallholder Horticulture Marketing Programme mainly targeted smallholder horticultural farmers that produce for the domestic market, input suppliers (stockists), produce traders, transporters, and processors. It reached about 21,311 direct households in 14 districts, and 36 per cent of beneficiaries were women.

The evaluation was conducted using a quasi-experimental approach, which combines econometric and qualitative techniques to estimate the impact of the project. A total of 1500 households of beneficiary and comparison groups were interviewed for the evaluation. Two measures of food security were employed to assess the impact on food security of beneficiaries – the Household Food Insecurity Assessment Score and the Household Dietary Diversity Score.

The project showed positive results on horticultural producers’ incomes and their food security. This was primarily realized through the production node of value chains, which employed a district-based approach. Training was provided to commercial village groups, however there was a greater impact on agronomic practices than on marketing knowledge.

The report found that the lack of trust among group members was the most common denominator in explaining the less-than-desired outcomes in commercial villages. Issues of lack of accountability and poor governance also acted as barriers to successful collaboration in groups dedicated to commercialization. Additionally, the effects of the devolution from central to county governments were most visible in relation to the market infrastructure aspect. Several market structures, built using the programme funds, in fact, were not functioning.

The evaluation recommends adopting an integrated approach and a proper sequencing of activities in value chain-related interventions. 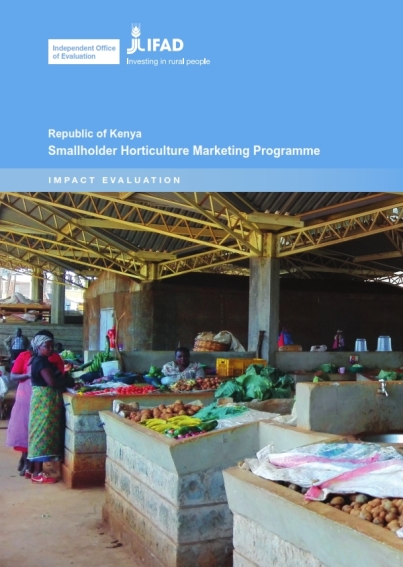