The Independent Office of Evaluation of IFAD (IOE) has prepared a performance evaluation report on the Agriculture Services Support Project (ASSP) in Botswana.

The project was implemented between 2012 and 2018 to help the target groups adapt to potential cuts to government agricultural subsidies. Targeting about 20,000 smallholder farmers in rural areas throughout the country, ASSP sought to (1) promote conservation agriculture practices; (2) pilot a wastewater irrigation scheme; and (3) build agricultural service centres (ASCs) for promoting market-driven extension services.

Thanks to the wastewater irrigation scheme, horticultural production no longer depended on the country’s erratic rainfall; however, the operation was costly and was undertaken on a pilot scale. Conservation agriculture was not taken up among target groups due to a lack of adequate equipment for the timely preparation of farms. The evaluation found that only two of the ASCs had been completed, against a target of 15 at design, and only one of the ASCs demonstrated delivery of market-led extension services.

Going forward, the evaluation recommends that IFAD focus on engaging in a technical support role, in line with the policy priorities and capacities established by the Government of Botswana. 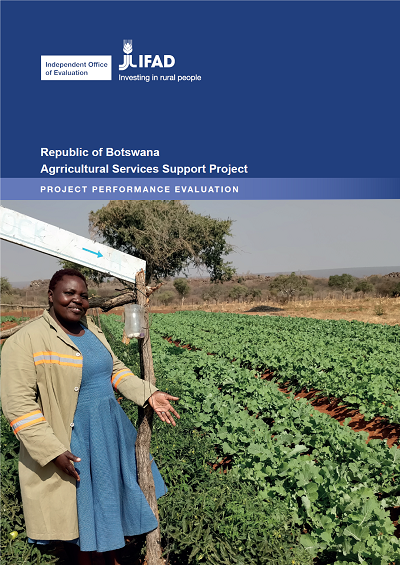 Roots in Palapye, Botswana – Building a sustainable agriculture sector
Learning Note on Perspectives and Observations on Agricultural Extension in Botswana