Enabling the rural poor people to overcome poverty in Eritrea

IFAD’s experience in Eritrea underscores the difficulty of operating in an acutely poor country affected by armed conflict. There are severe constraints on institutional capacity and human resources. Few skilled local staff are available and the capacity of public service
providers to intervene in new projects is limited.
IFAD began operations in the country in 1995, just two years after independence, and its first project had the aim of rehabilitating the crucially important irrigation system in the eastern lowlands. A second project was approved in 2002 to increase farmers’ incomes
from crop and livestock production in the western lowlands. IFAD’s loans to Eritrea total US$22.7 million.

In Eritrea IFAD’s strategy focuses on the reconstruction of communities and their development needs. Improving the management of natural resources is also a priority.
Assistance is directed at the eastern and western lowlands, where rural poverty is most severe and where social and economic infrastructures have been seriously disrupted by the conflict. These are also the areas with the best immediate prospects for expanding the production of small-scale farmers. 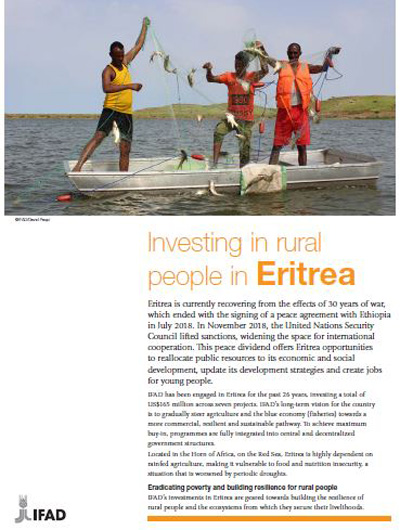