France and IFAD share a commitment to ending poverty and hunger through sustainable rural development. France’s development priorities and IFAD’s mandate are strongly aligned: both place small-scale farmers and rural people at the heart of their work, and recognize the potential of agriculture as a key driver in increasing food security, reducing poverty and mitigating climate change.

France is a founding member of IFAD and one of its top donors. Since IFAD’s inception, France has provided US$453.7 million to the Fund’s resources, US$12 million in supplementary funds and over US$212.2 million towards cofinancing of IFAD’s investment portfolio.

A loan of €200 million from the Agence Française de Développement and a concessional partner loan of €50 million have provided IFAD with significant additional resources. In the Eleventh Replenishment of IFAD’s Resources (IFAD11), France contributed a total of US$70.6 million. 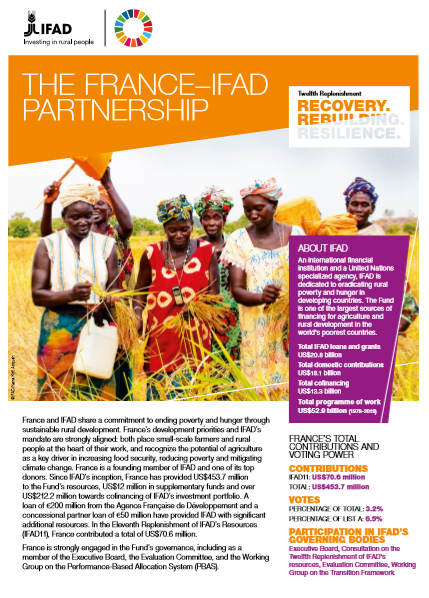