Egypt has undergone dramatic political upheaval over the last four years, following long-simmering grievances over the lack of economic opportunities and political inclusion that led to a revolutionary uprising in early 2011. The Egyptian economy, which had seen a strong upward trend, has borne the brunt of the continuing instability. Agriculture plays a key role in the Egyptian economy; growth in this sector is not only important to growth in national income but also vital to employment growth, food security and poverty reduction. Agriculture in Egypt faces some critical constraints such as shortage of cultivable land and water. Population growth and climate change combine to increase the pressure on the limited natural resource base. There is, therefore, an urgent need in Egypt to expand new areas of growth and settlement in order to attract people from the overcrowded old lands and provide them with an opportunity for development and diversification of livelihoods. To spur this growth, the Government of Egypt has given access to reclaimed desert lands and provided rudimentary housing facilities to unemployed graduates and smallholder farmers displaced from old lands in successive waves. In addition to housing, the government has made a considerable investment in other types of infrastructure, including roads, primary and secondary canals, and drainage, estimated at over US$300 million. However, in some areas, the progress of resettlement and land development has been slow due to the lack of the full range of social and economic services that are required for successful settlement. 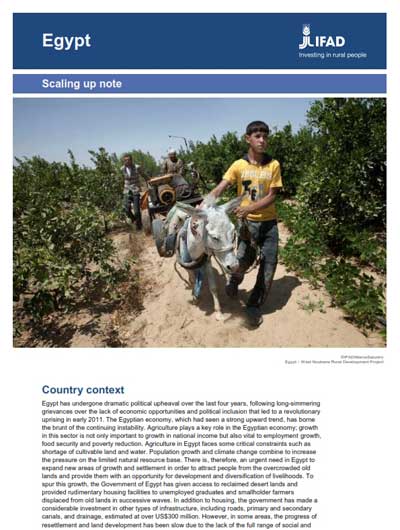