In Madagascar, the Project to Support Development in the Menabe and Melaky Regions (AD2M) aimed to improve the livelihoods of poor farmers by strengthening their tenure security and access to well-functioning irrigation systems. Implemented from 2007 and 2015, the project targeted 26 000 households in 19 groups of villages in the regions of Menabe and Melaky in Western Madagascar.

The project supported a decentralized land administration system by establishing local offices and training staff in land tenure regulations, which enabled them to more efficiently issue land certificates to farmers. With secure tenure, farmers had greater incentives to invest in their land and to use more sustainable soil and land management practices. Improved irrigation infrastructure helped to increase productivity levels, and to reduce farmers' vulnerability to insufficient or erratic rainfall, and other environmental conditions and climate shocks. Water User Associations (WUAs) were trained in managing and regulating irrigated areas.

An impact assessment of AD2M was conducted in 2016. The assessment used a mixed-methods approach that combined non-experimental statistical methods and qualitative analysis to compare a sample of project beneficiaries to non-beneficiaries. The impact assessment focused on households that benefited from access to certified irrigation land in the Menabe region only.

An impact estimate is calculated as the difference in mean outcomes between the treatment groups (project participants) and the comparison group (non-participants).

The impact assessment found improvements in agricultural productivity among participating households, mainly due to improved access to irrigation infrastructure and a more efficient water supply, which allowed farmers to cultivate for a second season. Results include:

The evidence from the impact assessment generated a number of lessons that can inform future project design as well as country strategies and policies: 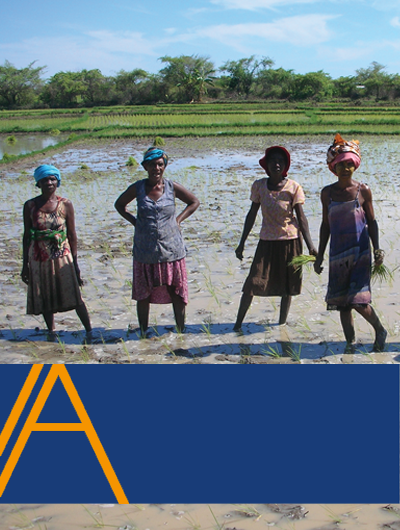