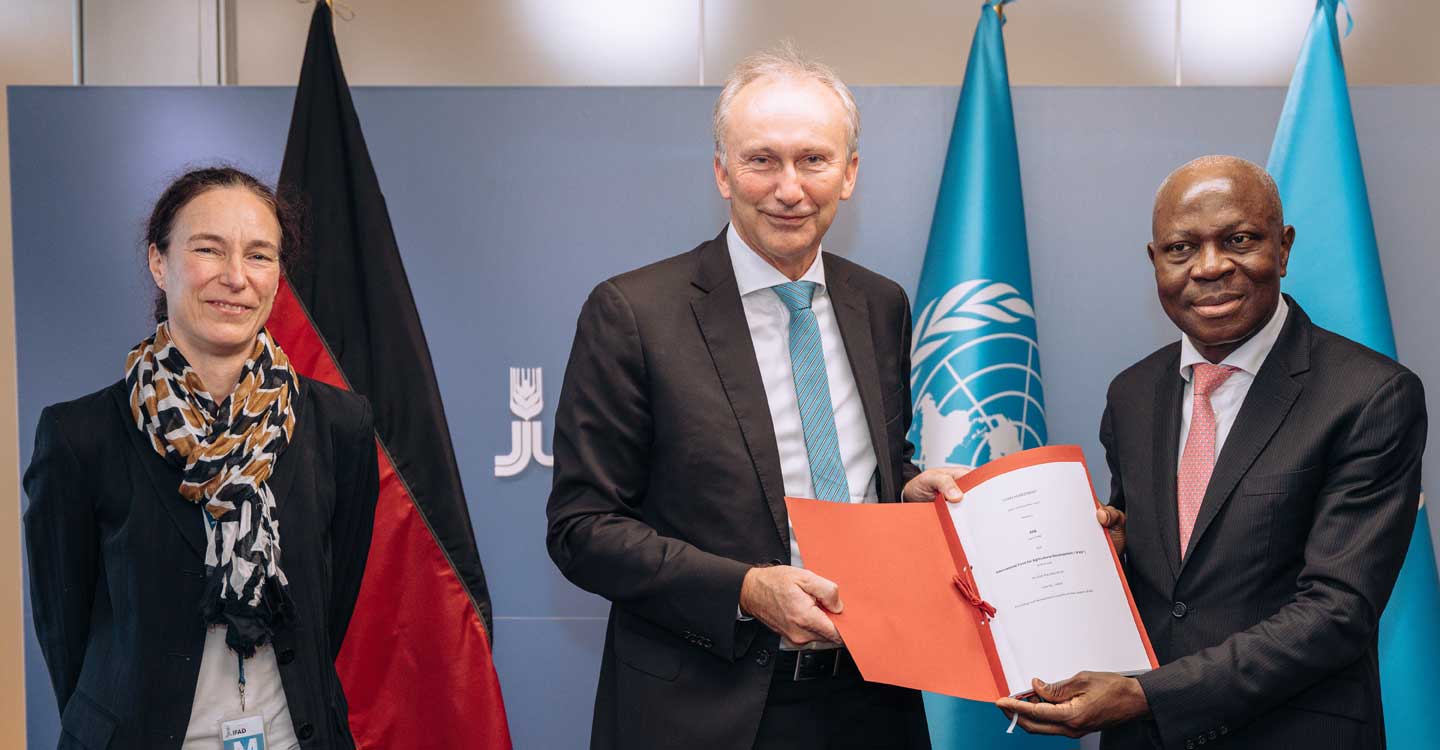 Rome, 19 November 2021 – Germany has signalled its strong commitment to ensuring millions of rural people in some of the world’s poorest countries can adapt to the impacts of climate change, earn decent incomes and access sufficient, nutritious food by commiting up to €400 million through its state-owned KfW Development Bank, in a loan agreement signed with the UN’s International Fund for Agricultural Development (IFAD).

The UN’s climate summit (COP26), which ended last week, saw a call for greater financing to help the world’s poorest countries adapt to the devastating impacts of natural disasters and more erratic weather. Rural small-scale farmers are particularly vulnerable to climate-related shocks, and IFAD’s investments help to build their resilience and ability to adapt.

“KfW’s injection of funding to rural development and resilience is incredibly timely. At COP26 earlier this month, we heard the desperate pleas for increased financial support from countries who are vulnerable to climate change and who are experiencing how erratic weather deepens hunger and poverty,” said Gilbert F. Houngbo, President of IFAD. “IFAD and KfW are very much aligned in our commitment to rural prosperity, and to invest in tackling hunger and poverty in the face of climate change.”

The loan from KfW, on behalf of Germany’s Federal Ministry for Economic Cooperation and Development (BMZ), will be used by IFAD to help finance its programme of loans and grants which is expected to total up to US$3.5 billion in 2022-2024.

This will help approximately 140 million rural people increase their production and raise their incomes through better market access and rural financial services. It will also increase climate resilience and contribute to creating employment and improved food security and nutrition for the world’s most vulnerable people.

KfW is one of IFAD’s first lenders. In 2014, KfW and IFAD entered into a Framework Agreement to grant IFAD loans for an amount of up to €400 million.

IFAD is an international financial institution and specialized agency of the United Nations dedicated to eradicating rural poverty in developing countries. It is focused on transforming agriculture, rural economies and food systems by making them more inclusive, productive, resilient to climate shocks and sustainable. Eight out of 10 of the world’s poorest people live in rural areas, and most depend on agriculture for their livelihoods. Adaptation to climate change is of critical importance for small-scale farmers who provide a third of the world’s food.