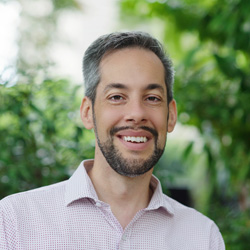 Providing effective extension service to millions of small family farms is a daunting task. In Indonesia alone, having an extension worker spend just half an hour per season with each farmer would take a team of over 50,000 people! In reality, farmers in Asia rarely receive in-person government extension.

Digital technologies have long been lauded as the solution. The assumption is that, if we can make quality content available online, it could reach millions of farmers – and at a tiny marginal cost per farmer, too. The go-to solution has been the agronomy app, an easy-to-use Android app that hosts a mix of weather, agronomy and price information. Such apps have been built by governments, seed companies and start-ups.

However, in practice, farmers in South-East Asia have been reluctant to adopt these apps. While download numbers for some have been impressive, repeat users are hard to secure. In an attempt to understand why, and how we might improve extension, Grow Asia undertook farmer interviews in Indonesia, Myanmar and Viet Nam to learn more. Rather than starting with our own assumptions about what digital technology could (or should) do, we wanted to better understand what farmers are already doing, and how they see the future.

We found a solid portion of farmers are actively using their mobile phones to support their farming decisions. However, they don’t gravitate to apps. Instead, farmers want to learn from their peers: they use digital tools to build on trusted relationships, not to circumvent them. Rather than using agronomy-specific tools, farmers are repurposing existing social media platforms to stay informed.

Farmers told us they value advice that has been tested by neighbouring farmers much more than the views of a distant and unknown expert. In our recently released report Driving AgriTech Adoption: Insights from Southeast Asia’s Farmers, we refer to these as “peer group dialogues”. These groups operate in WhatsApp, Facebook and Line, and engage millions of Asian farmers each day in lively discussions on topics such as seed varieties, prices and the weather.

The implications for government extension agencies are exciting. If expert agronomists can share useful techniques within these groups, they could act as a cost-effective amplifier for messages on everything from planting to pest scouting and harvesting techniques.

We believe the pathway to get messaging into these groups is through “power users”, more experienced farmers and retailers who provide leadership within the group. These people reach outside the peer group, to YouTube and Google, to find relevant information, and then circulate it to others in the group. Trusted by others, they act as “influencers” amplifying content beyond themselves.

Fortunately, a wide range of existing technologies allow government extension agencies to generate messages and then trace how far each one penetrates through such groups and how widely it is being read by farmers. A government agency could, for example, prepare one hundred different agronomy messages, send them out, and measure exactly which ones are being passed on and read. The agency could try messages with a range of different formats (photos, videos and voice), tones and levels of complexity. This would allow forward-looking extension agencies to improve their messaging over time, and to choose the formats and themes that generate the greatest reach.

By leveraging the tools that internet marketing companies have already honed to reach consumers, governments can deliver quality agronomy advice at scale, even during a pandemic.