Building a bay, one oyster at a time: A conversation with Chef Rob Rubba

Building a bay, one oyster at a time: A conversation with Chef Rob Rubba 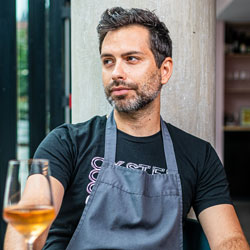 Rob Rubba is an American chef who made a name for himself running a fine-dining restaurant after training in Michelin-starred restaurants across the country. But now, his new restaurant is all about putting his environmentalism into practice. Situated on Washington, D.C.’s Chesapeake Bay, Oyster Oyster serves its namesakes – and other sustainable dishes – as a way to revitalize the local ecosystem.

We caught up with Chef Rubba to talk sustainable gastronomy, environmental restoration, and of course, good food.

(Chef Rubba’s answers have been lightly edited for length and clarity.)

How do you practice sustainability at your restaurant?

One of the most important things to us is sourcing locally. But that doesn’t mean we’re sustainable just by doing that. We work with farmers that are taking care of the land through stewardship – whether it be no-tilling, soil enrichment, or other organic practices – rather than just producing food.

Zero-waste is important to us too. We don’t put anything on the menu without knowing what we’re going to do with every part of it. Anything that doesn’t make it to the menu, we compost. And for us, zero-waste includes things such as water usage. It’s a very precious resource, and I think here in the United States we think it’s endless, but it’s not.

Finally, our restaurant is primarily vegetarian, with the exception of oysters, so we’re not contributing to greenhouse gases with meat production.

Was there a turning point that pushed you away from traditional meal production and towards an approach that values minimal waste and environmentalism?

I think the seeds of my environmentalism were planted when I was a child. But it was at my last restaurant in 2016 that it really started to blossom. We were a busy restaurant and we were using so much product. The more I dove into how much waste we were producing, the more I realized how unsustainable we were, the more I realized that it was selfish, in a way – that what we were doing was more for the ego than contributing to our community. So from there, I took up an environmentalist approach and developed what Oyster Oyster would come to be.

The Chesapeake Bay area has suffered a loss of biodiversity for many years now. What are the causes, and which species are the most affected?

Oysters have always been a huge part of the Chesapeake Bay economy, and they’ve been farmed to the point where now there’s less than 1 per cent of the oysters that were there to begin with. This has completely destroyed the oyster reefs, which are home to all kinds of life – it’s really a full cycle. But human invasiveness has destroyed that.

Oysters are an amazing filter; they’re necessary for the watershed itself. One oyster filters up to 50 gallons of water a day. When they’re not there, the fertilizers and wastes that enter the water create dead zones. And now, with basically no life in some parts of the bay, there are growths of too much algae and many other problems.

And yet, oysters are a key part of your menu, correct?

Yeah – and I know it’s interesting to still serve oysters after I just said we’ve completely wiped out the reef! We use locally farmed oysters, so they’re not taken from wild harvest. For every oyster we sell, we work with the Chesapeake recovery service to return the shells to the waterways so we can rebuild the wild reef.

If we’re not eating oysters, then we don’t have oyster shells to put back. Because an oyster doesn’t grow on a rock, it doesn’t grow in the soil. It has to grow on another oyster. And that’s kind of an amazing thing. We need oyster shells to make a new oyster reef, because without one oyster, you can’t have another.

What role do chefs play in communicating the importance of conservation and sustainability, and how do you intend to continue doing this?

We play a crucial role in the food system. We have a voice, we set the tone and we set trends. (I hope sustainability isn’t viewed as a trend – that it becomes permanent.) We are able to communicate with our guests and with our community and display what’s important to the food systems themselves.

Does your environmentalism affect which restaurants you choose to eat at? And how can consumers protect and honour biodiversity?

If you were out in the wild and you saw a plant or fruit, you would investigate it, right? You can do the same thing with restaurants. See if they’re celebrating their farms, their practices. See if there’s ethos involved with what they’re doing. These days, with so many different outlets, it’s easy for restaurants to get their missions out. Ten or 20 years ago, it would have been very difficult to find out what’s going on behind the kitchen doors.

At home, be mindful of the products you buy, the waste they create, the packaging. Shop at local farmers’ markets or co-ops or grocers that support local farms. Find products grown with sustainability in mind.

Finally eating less meat is one of the best things you can do for the planet.

What called you to join the IFAD Recipes for Change team?

There are so many parts of the world, especially rural communities, that are affected by climate change and are already adapting to it, and I think we’re behind on seeing that reality. I joined to connect with this community and learn from it, to contribute what knowledge I have about cooking and try to work towards a better future that we’ll be able to feed the world with. Because at the end of the day, restaurants are a luxury, but having food is a right – and everyone should have access to food. And it seems it’s going to get a little more difficult, so anything that’s working towards feeding the world is crucial to me.