It’s the first few days at the IFAD Pavilion at COP26 in Glasgow, United Kingdom, and we’ve come together with thousands of activists, world leaders and representatives of businesses and civil society from around the world to talk about the greatest challenge we face: how to mitigate and adapt to climate change.

As the World Leaders Summit wrapped up on Tuesday, 56 of the world’s leaders spoke movingly about the need to act on climate change. Nigeria, Africa’s most populous country and its second-largest emitter of greenhouse gases, pledged to reach net zero by 2060.

The UK Presidency launched the Breakthrough Agenda, at which 42 states committed to accelerate the use of clean technologies and sustainable solutions by 2030.

An important development was the Glasgow Leaders’ Declaration on Forests and Land Use, announced by the UK Prime Minister, Boris Johnson. This brought 110 countries together for a commitment to end deforestation by 2030.

On Wednesday, at the Nature Pavilion, attendees discussed the declaration in detail, pointing out that it does not cover the crucial issue of forest governance. Ministers from Liberia, Gabon and the Republic of the Congo pointed out that some of the world’s highest polluting countries aren’t willing to pay the price for protecting tropical forests and the ecosystem services they provide.

What we’re talking about this week: climate finance and why it matters

A strong and committed start to climate finance discussions will be crucial to success in Glasgow, and yesterday we saw this start to happen. Countries discussed the goal for developed countries to mobilize US$100 billion per year by 2020, and new collectively quantified post-2025 finance goals. Norway announced it would double its climate finance commitment to US$1.6 billion by 2026, while Denmark pledged US$1 billion by 2023, and Japan promised US$10 billion in the next five years.

The UK Chancellor of the Exchequer, Rishi Sunak repeated calls on leaders of wealthy countries to honour their commitment to provide US$100 billion a year to help developing countries adapt to climate change.

While reducing greenhouse gases in the air needs global investment on a massive scale, it’s as important to allocate funds to help the world’s most vulnerable people adapt to climate change impacts that are already inevitable. Yet, of all climate finance tracked in 2017/18, only 1.7 per cent was directed at the small-scale farmers who will be some of the worst affected by climate change.

That’s why, at the IFAD Pavilion we decided to bring these small-scale farmers front and centre, helping their voices be heard on a global scale. 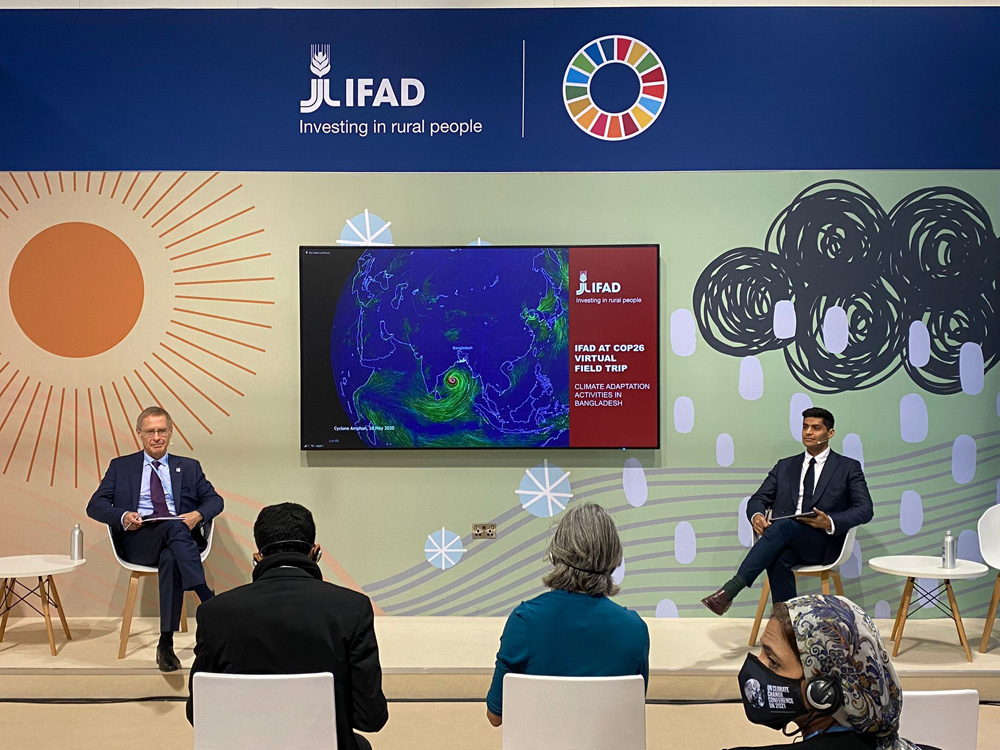 A virtual visit to Bangladesh

It was a grey and chilly morning in Glasgow, but at IFAD we started the day in Bangladesh, where we met some of the small-scale farmers to hear about the challenges they face due to climate change, and how they are being helped to adapt through IFAD-supported projects.

In Haor, farmers spoke of submersible roads that can withstand flash floods, and early warning systems that enable them to protect their harvest.

While in Satkhira district, where rising sea levels are making the water too saline for shrimp to thrive, shrimp-farmers described how turning to farming salt-tolerant crabs has helped them preserve livelihoods.

A packed (but socially-distanced) crowd filed into the IFAD Pavilion to listen to IFAD’s Donal Brown and H.E. Djanybekov Askarbek Saparbekovich, Minister of Agriculture of the Kyrgyz Republic, talk about low-emission and resilient livestock rearing. This was followed by sessions on scaling up private sector investment in climate adaptation, and lessons from IFAD’s experience on payment for environmental services.

IFAD has committed to dedicating 40 per cent of its core resources to climate finance. Our new ASAP+ programme aims to mobilize US$500 million to help 10 million smallholders cope with a changing climate.

Coming up at the IFAD Pavilion: We’re talking resilience, and how public development banks, such as IFAD, can help countries access climate finance for adaptation. Find out more.

Missed today’s events at the IFAD Pavilion? Catch up on day 1 below: