Nowadays, over 230 million people live outside the countries and communities they call home. The individual stories of those who leave their rural villages for destinations abroad are stories of great dedication, but also of tremendous sacrifice, and the personal decision to migrate has direct effects on development of countries of origins. Officially recorded remittances to developing countries are expected to reach half a trillion dollars this year, representing a significantly higher amount than foreign direct investment to developing countries and over three times larger than official development assistance. Remittances are therefore an extremely important and stable source of private inflows to developing countries, as they bring in large amounts of funds that help sustain the life of millions of families.

Given their importance, remittances continue to attract high level domestic and international policy attention: policy efforts focus on facilitating the safe and efficient flow of remittances, as well as maximizing their impact on economic growth and development. The quality and cost of remittance services are among the most fundamental determinants of the impact of these flows.

Such services vary significantly across remittance corridors, depending on market conditions in both sending and receiving economies. Bringing together over 400 participants, including experts and stakeholders from leading business groups, government regulators and civil society, the GFRD2015, co-hosted by IFAD, the World Bank and the European Commission, highlighted the great potential of remittances to and from Europe, and its global impact and implications. 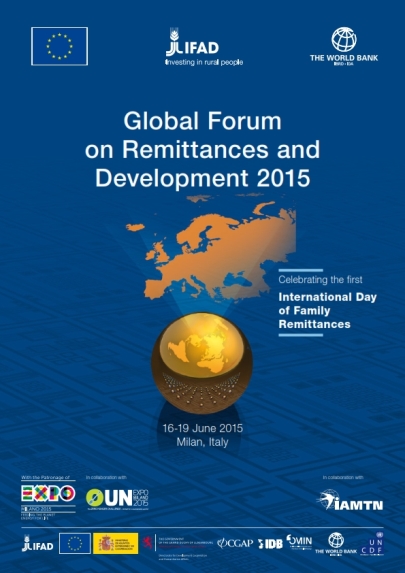 Main objectives of the GFRD2015 were to:

June 2021 - EVENT
On 16 and 17 June, IFAD will host the Global Forum on Remittances, Investment and Development 2021, held virtually.