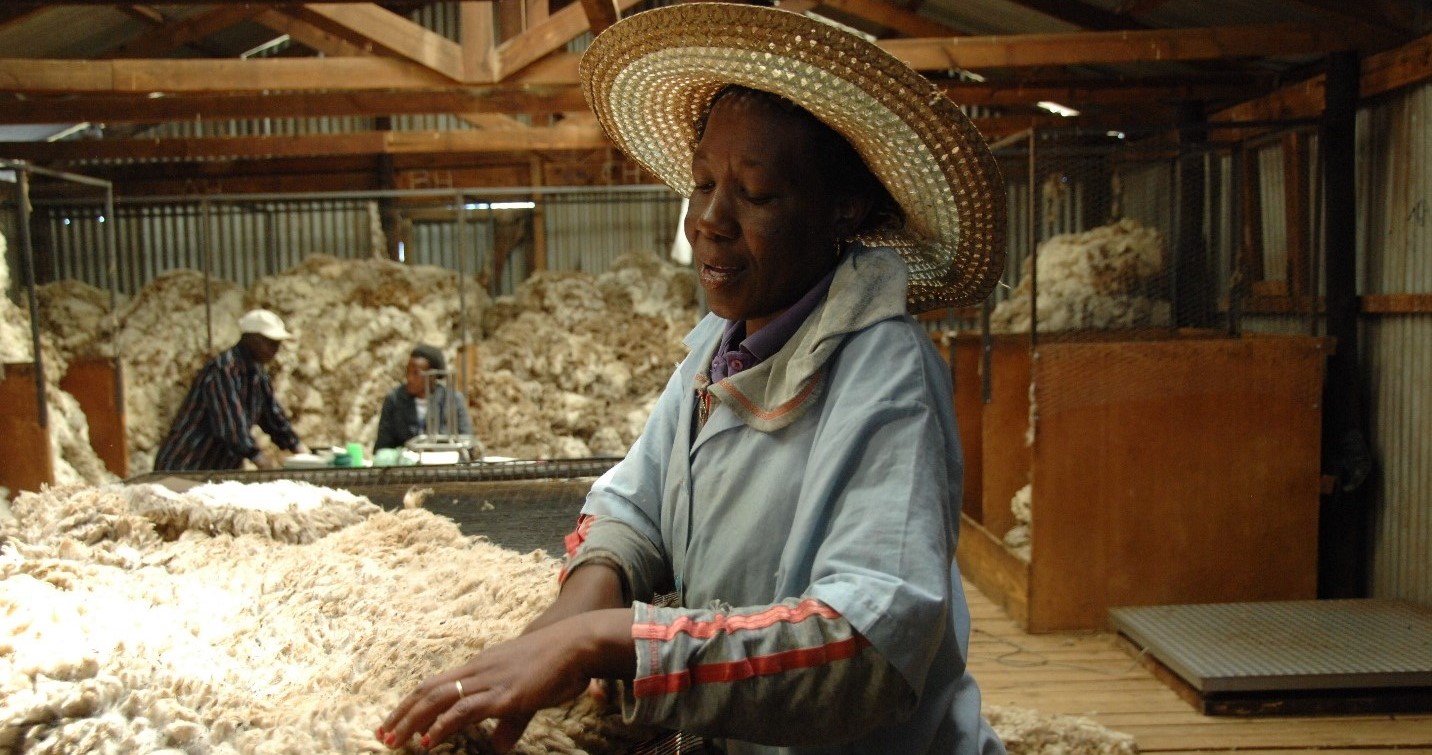 Lesotho’s wool and mohair industry is steeped in history and tradition. Ever since the 1800s, the nation’s sheep have been producing high-quality wool and its Angora goats have been producing mohair, a finer fabric with an eye-catching shine. Most of these goats and sheep live in small herds managed by rural small-scale farmers, whose activity forms the bedrock of Lesotho’s economy.

Over the years, the industry had developed a well-functioning network that connected local producers in Lesotho with brokers in South Africa, who bought the raw product and then processed and sold it. This network also hosted a number of support services, including the provision of improved breeds, suitable equipment, and supplies such as livestock medication; training on livestock and range management; and access to loans.

However, the Government of Lesotho realized that this arrangement, while beneficial, prevented their farmers from fully enjoying the benefits of their work. In 2018, the government began taking steps to nationalize the industry, passing restrictive regulations and stipulating that licenses for shearing sheds, testing, trading, and auctioning would only be granted to citizens of Lesotho. Their goals were to create employment, increase farmers’ incomes and national tax revenues, and reduce the industry’s reliance on external brokers and markets.

Despite their intent, these reforms only brought about extensive disruption. Neither the brokers nor the sector’s other stakeholders were adequately consulted prior to these changes, leaving them unprepared to handle the effects. Only one local company met the requirements for a broker’s license, and the resulting restriction in capacity significantly delayed payments to farmers. All of the other services embedded in the value chain – equipment, medication, loans – were lost too. By 2019, the country’s farmers were leading nationwide protests.

Although the regulations were amended at the end of 2019 and more broker licenses were issued, the industry still faced significant challenges. Recognizing that they needed some advice, the Government of Lesotho turned to IFAD to help engage the sector’s stakeholders and look for solutions to resolve the impasse.

IFAD’s support has been crucial to the development of Lesotho’s wool and mohair industry, particularly through its flagship WAMPP project. When the government first requested their support, IFAD’s Lesotho country team stepped in to act as a mediator, hosting several roundtable discussions to keep communication channels open.

IFAD and WAMPP also commissioned a study to analyze the impact of the 2018 regulations and inform further policy revisions. The study, conducted in 2020, reviewed the effects of these regulations on many different value chains in Lesotho, with a focus on the wool and mohair industry. The study was also part of IFAD’s Country-Level Policy Engagement, an ongoing effort to encourage policy change benefiting agriculture and rural development.

The study’s key findings revealed a growing disparity between local and global prices for wool during the season that followed the introduction of the regulations. The study estimates that wool farmers could have earned between 10 and 13 per cent more if the prices under the new broker in Lesotho had continued to track the trends in the global markets. The findings also showed that otherwise positive developments were offset by heavy losses. For example, even though the farmers’ deductions (as part of their sales to foreign brokers) decreased after the regulations were introduced, the loss of the embedded support services and the resulting severe impacts on the sector’s overall functionality outweighed any potential gains.

In contrast to these negative effects, the researchers also pointed out the potential for future positive developments made possible by the regulations. The amended legislation has opened up the floor for discussions on enhancing in-country wool and mohair marketing systems, for strengthening value chains, and for advancing the other objectives of localization, as initially intended. Nonetheless, challenges remain in determining which components of the marketing system might feasibly be located within the country’s borders and which should be undertaken in conjunction with partners in South Africa.  Addressing these issues will require consultations with a wide range of stakeholders and the rebuilding of trust among the actors involved. WAMPP and IFAD fully support this process.

The reforms, and their consequences, continue to be a source of controversy and dissatisfaction among the industry’s farmers. Nevertheless, there are many potential prospects for upgrading the in-country value addition sector – e.g., through forming links with the ethical fashion industry and accessing premium “green fiber” markets. As indicated by the study, providing finance for producers and other upstream actors is another important step in the right direction. IFAD remains committed to supporting the industry and to helping the government reach its original objective: strengthening Lesotho’s wool and mohair value chains.