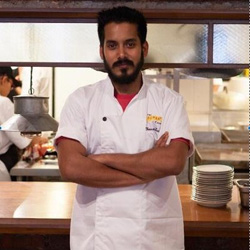 Chef Thomas Zacharias has been a chef for nearly 15 years. In that time, his career has taken him from his grandmother’s kitchen in his native India, to some of the finest restaurants around the world, and back again. Today, his Indian Food Movement promotes regional cuisines and celebrates indigenous, local and seasonal ingredients.

We caught up with Chef Zacharias to learn more about what drives him to foster connections between farmers, chefs and consumers. Our conversation has been lightly edited for length and clarity.

IFAD: We’re all about shaping a future for food systems that’s pro-environment. What role do you see chefs playing in that?

I grew up in a small city in southern India called Kochi, and growing up in Kochi in the ’90s, I actually didn’t even know that chefs existed. They were mostly behind closed doors; you didn’t really see them out in the open. But today, chefs have become changemakers in their own right.

I think the plight of our food systems is a point of concern for only a fraction of the population. And if we want to fix it, we need awareness that then leads to action. Chefs, both through their kitchens and through the media, have the ability to navigate food trends and help build momentum towards things like going local, eating seasonally, supporting small marginalized communities, and indirectly improving the food security of our farmers and food producers.

IFAD: Why has education become an important part of your work?

Chef Zacharias: I don’t exactly associate my work with being educational; I like to see it more as storytelling.

Education in conversations around food sustainability is something that can really only work on young minds, something that I definitely think schools across India and the world need to incorporate more of in their curriculum. But once you become an adult, you’re not so receptive toward being taught or absorbing information or changing your behavior. I think what works more is powerful storytelling. You can really change minds and get people to act when you get them to buy into the stories surrounding our food. You need to get people to connect emotionally.

I’ve been doing that both through my food as well as through other forms of communication, whether it’s social media or the written work that I’ve done. And I’ve seen people change their perspectives, open up their minds and even alter their behaviour, even if it’s in small ways.

IFAD: Can you tell our listeners about your new food platform?

Chef Zacharias: I used to run a restaurant in Mumbai, called The Bombay Canteen, that paid homage to traditional regional Indian food but in new and exciting ways. And for the past eight years, I’ve been traveling across India for food exploration. As a chef cooking at a modern restaurant, the intent of these travels was primarily to get inspired by local ingredients and regional cuisines, and bring those ideas back onto the menu in meaningful ways. But in the process, I also became privy to various problems within our food systems: unsustainable food production practices, the food insecurity of our farmers, food waste, the loss of our culinary heritage, things like that.

About a year ago, I decided to leave my job because I wanted to make a deeper intervention into our food systems. And I figured I could take advantage of the credibility and the following that I had built over all these years as a chef who really cares about these issues. Today, there’s a huge disconnect between the people, places, and the ecosystems at the source of food, and the end consumers in our cities that are driving demand. This is true in India, and probably in many other parts of the world too.

So I started this food platform called the Locavore. The idea behind the Locavore is to narrow the divide between the people behind our food and the end consumer by getting them to engage: through conversation, through storytelling, by building a sense of community, and by creating more fun and approachable ways to interact. And that translates to lasting change.

IFAD: Why did you join the Recipes for Change team?

Chef Zacharias: For many years now, I’ve been passionately rallying behind a lot of the same causes that IFAD stands for through my own work, but it’s mostly been in an individual capacity. I strongly believe in the power of collaboration, and in the synergy of a collective movement making shifts towards understanding what happens in our rural agricultural areas and in the context of people growing our food. I think this is what can really fuel the positive change we so desperately need today. And what better medium than food and recipes – something that is so universal, yet so personal?