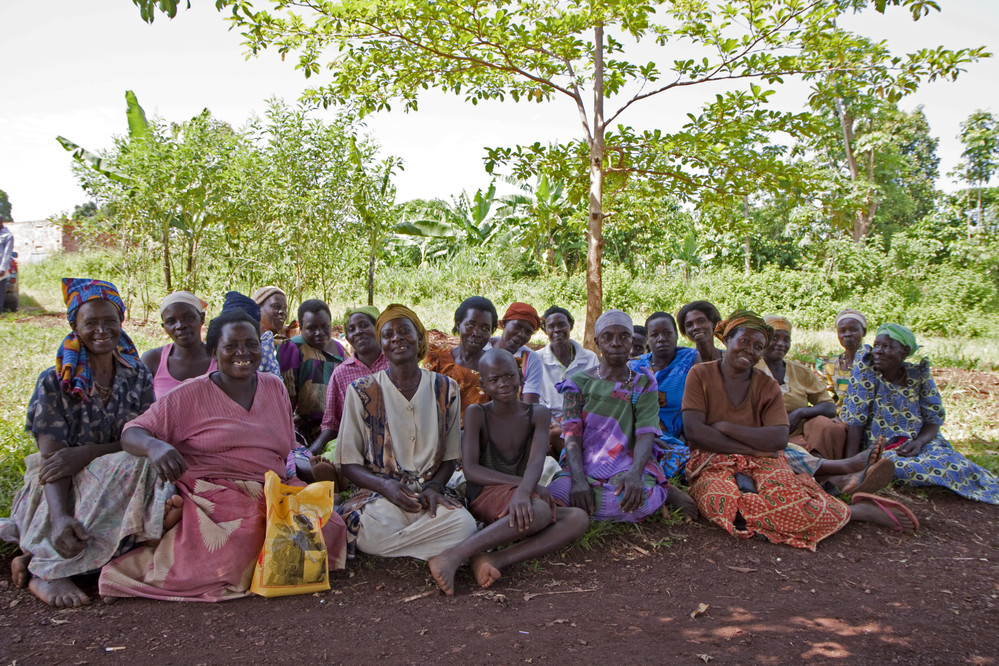 They say that leaders are not born, but made. That’s certainly true for Molly Ajok, a 33-year-old household mentor from northern Uganda.

Molly was born in Agwari, a remote village in Uganda’s Omoro district. When she was just a toddler, her family fled to Gulu town to escape the civil war raging throughout the area. She stayed there for most of her life.

But in 2017, she fell on hard times. With no job and no hope of completing her diploma training, Molly was struggling to provide for herself and her young child. That was when she made the difficult decision to rejoin her parents in Agwari.

“It was not easy,” she tells us. “I was bitter and saw no future for my child and I.”

But as the second of 10 children, she knew she was expected to contribute to the household income – so she got to work.

“At first, I sold pancakes to make ends meet,” she says. “I earned about US$750 per year, which was just enough to pay for my child’s school fees and contribute to household expenses.”

Her turning point came when she was selected by the community to become a household mentor as part of the IFAD-supported PRELNOR project.

Mentoring programmes like the one in Agwari help families improve their livelihoods by developing their capacity to set priorities and plan for the future. Participating families apply these skills first within their own households, then at a community level through involvement in various groups and development initiatives. Programme facilitators and household mentors from within the community provide guidance and support at every step. This is where Molly’s leadership experience started.

“In the beginning, things were tough but I was determined to make it work,” she says. “I am always encouraged when I see transformations in people’s lives.”

The mentoring process guides participating families through five phases. Families begin by analyzing their household’s current situation. They then identify a common vision for the future and draw a “vision journey” that pictorially represents their current challenges and the actions they will take to reach their goals. From there, they develop an action plan and begin implementing it. At the end, households graduating the programme are given a food security grant that can be used to boost their current food production (for those already involved in agriculture) or start a new business. The vision journey component, in particular, was adapted from the Gender Action Learning System, part of IFAD’s portfolio on household methodologies.

It was not long before Molly met Margaret.

Margaret Ayoo, a 53-year-old mother of five, was struggling. Her husband had left her, and his departure significantly reduced the family’s income. She had been working as a day labourer on other people’s farms to try to put food on the table, but the money was never quite enough. When Molly first met her, after the community referred her to the programme, she could not envision a future for herself.

After going through the mentorship process, Margaret no longer works on other people’s farms – she now has her own land to till, given to her by the community. She grows enough crops to feed her family and has plenty left over to sell at the market. With the income she earns, she can pay her children’s school fees again.

She has also received recognition from her fellow community members. Recently, she was chosen to be the treasurer of the local Savings and Loan Association, an opportunity she never would have imagined before beginning the programme.

Molly could not be prouder of her. “I am happy to see the transformation in her and her children,” she says. “You would not believe that this is the same woman I met one year ago.”

Molly also believes a leader should live by example. So, as she began gaining experience with other households, she started exploring her own family dynamics using the skills she’d learned.

At first, it was not easy to get her family talking about these topics – particularly her father, who was used to making all the decisions for the household. But after she opened up a conversation on gender roles and started discussing ways to redistribute the work at home, they came around. Today, her father happily includes his wife in the decision-making.

Molly has also identified her own vision journey and set goals for herself. She is now working on growing her own businesses and increasing her income. In addition to her mentoring work, she has begun a poultry- and pig-raising project. It’s already paying off – it increased her income by 40 per cent in 2019. And she still makes pancakes and sells them to nearby schools.

Today, four years into her role as a household mentor, Molly’s experiences have shaped her into an exemplary leader. She has helped over 40 households to date. Her reputation precedes her, too: she’s spoken highly of throughout the community. In recognition of her skills, she was recently selected as the chairperson for her village’s Child Protection Committee.

Like many people, she experienced significant financial setbacks in 2020. With schools closed due to the pandemic, her pancake sales suffered. She also lost a lot of her poultry to disease. Nevertheless, she’s still optimistic about the future.

“I am very thankful to the community and PRELNOR for the opportunity to become a household mentor and help people in my community,” she exclaims. “My life really has changed!”

As Molly continues on her leadership journey, she is grateful for the positive and enriching experiences that come from each household she mentors.