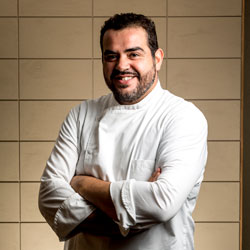 What have been your sources of inspiration when creating your dishes?

It comes from many different elements. I think it represents a way of seeing things. I love to be inspired by what I have experienced, by my memories as a child. I prepared a dish dedicated to my grandfather Solomon, who was of Syrian origin, because he was the first one who made me try raw meat. When I was about four or five years old, he made me try kibe, which is like a fried beef dumpling, and he made me taste it before cooking it. I loved that flavour of the meat with the mint, with the onion, and I had that engraved in my memory.

I think that all you have tasted, whether it is from your childhood, from a trip, or an ingredient from another part of the world, all these experiences are what you want to offer. Inspirations can come from anywhere. It's a memory, an emotion that you have inside you and that you want to share.

Do you think that using local, seasonal and organic products makes a difference in the preparation of your dishes?

I think that the season of the product marks the apotheosis of that product in season. It gives the maximum splendour of its taste, of its flavour, and that is what I need. We use primarily seasonal products, and I like that. Even though there are times when I have to use a product that is not from the territory, and I have to go and get it from a little further away, I pay a lot of attention to seasonal products because they provide the greatest apotheosis of taste.

In 2010, your restaurant Metamorfos in Rome opened its doors to the world to offer innovation and a different take on traditional food, causing a sensation. How did the project come about?

I felt the need to change, to create something new, something that represented me and that represented the chef I wanted to be. I met some new Roman entrepreneurs who believed in my project, I proposed it to them, and Metamorfosis was born. They wanted to have a restaurant that was one of the best in the city and I wanted a stage where I could express myself and where I could show what my cuisine was. I was thirty-three years old, so it was the beginning of a beautiful path where I could start doing my own cuisine.

How important is the link between producers and cuisine? That is, the relationship between the farm and the table.

The relationship between the farm and the table in the restaurant is very important. If you know the product, if you know who makes the product, how hard it is to produce it, what the problems are, you appreciate it more. Seeing a product and getting to know the work of farmers first-hand helps us to understand it much more. That is why it is essential to work with the people who produce it directly.

I expect to get to know people and help them with my work. I think that there is a synergy between my recipes and the producers who produce the ingredients I use in them. I can get to know places and products, and give a part of what I know to promote my work while also promoting those products in different communities.

I am a Colombian with half-Eastern roots living in Italy for more than 20 years. My grandfather was Syrian, my grandmother was Spanish, so I am the fruit of a great combination. And I love this combination of different peoples. Recipes for change can give me a lot of that, and I can do my bit to help this project grow and become stronger and stronger.