A USD 15.1 million project in the Republic of Congo aims to improve agricultural development in rural areas

A USD 15.1 million project in the Republic of Congo aims to improve agricultural development in rural areas

Rome, Thursday, 20 May 2004  About 130,000 people living in poor, rural communities in the central area of the Republic of Congo will benefit directly from a new project designed to boost local incomes and improve food security. 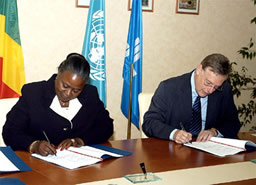 The loan agreement was signed today at IFAD headquarters by the Republic of Congos Minister of Agriculture, Livestock, Fisheries and Womens Promotion Ms Jeanne Dambendzet and IFAD President Lennart Båge.

Lack of appropriate governance, resulting in economic mismanagement and armed conflicts have contributed to making the Congo one of the poorest countries in the world. Most rural households depend on agriculture for their survival, and more than 90 percent of the countrys total food production is generated by smallholders using traditional methods. But the agricultural sector has been largely neglected by the government, despite the countrys vast natural resources and potential. Less than 2 percent of the Congos arable land is cultivated, and the country imports a substantial amount of food to meet the national demand.

Low productivity and a lack of access to markets and financial services exacerbate poverty in rural areas, particularly in the three regions where the project will take place  Plateaux, Cuvette and Western Cuvette. One of the main objectives of the project will be to open up agricultural production zones by restoring and maintaining rural roads. Improved roads will make it easier for farmers to access markets as well, and the project will help farmers with various marketing activities, including processing and group sales. The project will also provide farmers with access to improved seeds and plants, and support the development of a sustainable rural finance system.

Community participation is a key component of the project. Communities and individuals will be able to prioritize their needs, manage project resources and establish training programmes in hopes of strengthening the role of grassroots organizations in the development process. Women in particular will be encouraged to participate in the project, given their critical role in food and income production, and activities will also target youth, who have been recently returning to the Congos rural areas.

With this loan, IFAD will have financed 4 projects in the Republic of Congo, totaling SDR 29.2 million.

IFAD is a specialized agency of the United Nations dedicated to combating rural poverty in the most disadvantaged regions of the world. Since 1978, IFAD has invested USD 8.1 billion in 653 rural development projects and programme in 115 countries and territories. Through these projects and programmes, about 250 million rural people have been supported in their efforts to overcome poverty