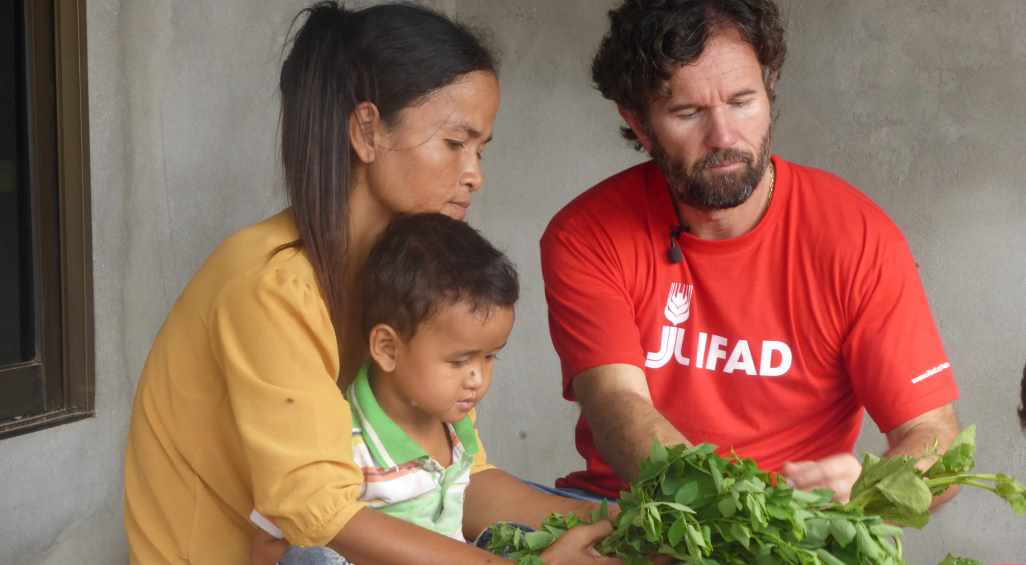 Rome, 3 June, 2016 – To celebrate this year’s World Environment Day on June 5, the International Fund for Agricultural Development (IFAD) partnered with Italian celebrity chef, Carlo Cracco, to highlight the impact that climate change is having on rural communities in developing countries.

Participating in IFAD’s Recipes for Change campaign, a web tv series where top chefs raise public awareness by cooking foods that are threatened by climate change and show how IFAD is helping farmers adapt, Cracco visited an IFAD-supported project in Kandal province in southern Cambodia.

“Climate change is a fact,” said Cracco. “Perhaps we can slow it down, but we cannot stop it. So we must help those people who work the land so that there is a change in the way we fight the battle of climate change.”

Rice, a staple food in Asia, counts for almost 80 per cent of farmland in Kandal province, but frequent droughts and damaging floods mean farmers here have seen harvests halved.

“The situation has got much worse and if it carries on like this it will just get even harder for farmers in Cambodia,” said Margarita Astralaga, Director of IFAD’s Environment and Climate Division. “If they can no longer produce rice, which is for them a staple, it threatens their life, their culture, their tradition.”

By releasing the latest Recipes for Change episode on World Environment Day, IFAD hopes to raise awareness about what can be done to help small-scale farmers adapt to climate change. In Cambodia, for example, an IFAD-supported project is helping around 90,000 farmers build their resilience to climate change by introducing low-cost technology and more efficient farming practices. Among them, drum seeders help improve yields, save on seeds and halve the amount of time spent sowing in the scorching heat. To grow vegetables, local farmers use a drip-irrigation system, cutting down on water usage while maintaining soil moisture.

“You must cultivate what you have, maintain and preserve over time, not let it deteriorate,” said Cracco. “You don’t often value what you have, only when it is lost do you say it was better before. But by then it is too late.”

Cracco is one of the three judges of Masterchef Italy, presenter of Hell‘s Kitchen and chef and owner of Cracco restaurant, which has earned two Michelin stars and is listed as one of the 50 best restaurants in the world.

To view the Recipes for Change episode featuring Carlo Cracco:

Find out more about IFAD’s Recipes for Change campaign:

IFAD invests in rural people, empowering them to reduce poverty, increase food security, improve nutrition and strengthen resilience. Since 1978, we have provided US$17.7 billion in grants and low-interest loans to projects that have reached about 459 million people. IFAD is an international financial institution and a specialized United Nations agency based in Rome – the UN’s food and agriculture hub.