IFAD to boost the economy of Nicaragua’s dry Region

IFAD to boost the economy of Nicaragua’s dry Region

Rome, 17 September 2003  A new IFAD-supported programme will provide a much needed boost to economic development in the Dry Region of Nicaragua. The USD 25 million programme will also strengthen Government efforts to implement its Reinforced Strategy for Economic Growth and Poverty Reduction, which was adopted in 2001 to take full advantage of the international Debt Initiative for Heavily Indebted Poor Countries (HIPC). The Initiative permits Nicaragua to reduce its debt stock by 70%, representing annual savings equivalent to 5% of GDP, which will be devoted to poverty reduction. Many of the countrys rural poor live in the Dry Region, where natural disasters in recent years have damaged infrastructure and left the economy increasingly vulnerable. 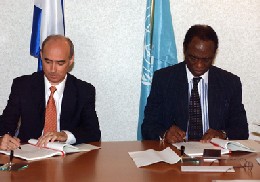 Through economic revival and the creation of small business and employment opportunities, the new Programme for the Economic Development of the Dry Region targets 44,600 rural poor families with annual per capita incomes under the poverty line of USD 430 in 33 municipalities of the region. The programme will be financed partly by a highly concessional loan of USD 14 million from the International Fund for Agricultural Development (IFAD). The loan agreement was signed today at IFAD Headquarters in Rome by H.E. José Cuadra Chamorro, Ambassador of Nicaragua to Italy and Mr Cyril Enweze, Vice President of IFAD.

At the signing ceremony, Mr. Enweze underlined the importance of the Nicaraguan Governments decision to set priorities and make commitments within the framework of the HIPC, which, he said, allowed a more profound policy dialogue with IFAD. The strategy of the new programme coincides with the Governments new rural poverty strategy, Mr. Enweze said.

The programme will directly support some 12 000 rural poor families, of which 40% are headed by women, to establish small businesses and other income-generation activities, or benefit from employment plans. Financial and social services, as well as local infrastructure such as storage facilities, market places and transportation will be improved. It will build the capacity of rural men and women workers, micro-entrepreneurs and smallholders to link them to the active sectors of the economy. In order to achieve this, the programme will foster the capacity of the target group, mainly youth and women, to deal with products and labour markets, and strengthen local financial and non-financial services. This represents an innovative approach that creates opportunities and increases competitiveness, on one hand, while linking the produce of the poor to the main chain of value-added products and agro-industrial integration, on the other.

IFAD is a specialized agency of the United Nations dedicated to eradicating rural poverty in developing countries. Since 1978, IFAD has financed 625 projects in 115 countries and in the West Bank and Gaza for a total commitment of approximately USD 7.9 billion in loans and grants. Through these projects, about 250 million rural people have been supported in their efforts to overcome poverty.