Rome, 27 October 2003  Farmers in some of the poorest areas of Uganda will benefit from a new USD 24.5 million loan programme that will make financial services such as credit and savings facilities more accessible to rural poor people. 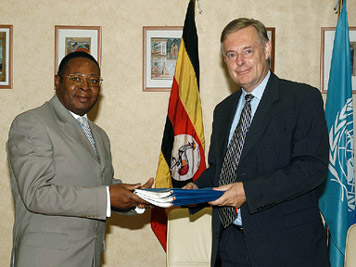 The seven-year programme will be financed largely by a USD 18.43 million loan from the International Fund for Agricultural Development (IFAD). The loan agreement was signed today at IFAD headquarters by IFAD President Mr Lennart Båge and the Ambassador of Uganda, his Excellency Mr. John Bakayana-Kityo.

This programme will strengthen the countrys existing microfinance institutions and rural finance services and expand their reach to a greater number of rural people. By complementing the governments existing programmes and those of donor partners, it will help create a strong, long-term finance system that will help rural poor people improve their livelihoods and quality of life.

This programme will continue a trend in mobilizing and assisting women in rural Uganda. For example, a typical womens enterprise is the production of a banana locally known as matoke, a staple crop in Uganda. With even a minimal loan, a Ugandan woman could purchase new seeds or fertilizers that may improve her output, and so increase her income and her ability to save.

With this project, IFAD will have financed 10 projects in Uganda, totalling USD 132 million.

IFAD is a specialized agency of the United Nations dedicated to eradicating rural poverty in developing countries. Since 1978, IFAD has financed 625 projects in 115 countries and territories for a total commitment of approximately USD 7.7 billion in loans and grants. Through these projects, about 250 million rural people have been supported in their efforts to overcome poverty.