Landless women to benefit from IFAD-backed microfinance project in Bangladesh

Landless women to benefit from IFAD-backed microfinance project in Bangladesh

Landless women will be the main beneficiaries of a USD 20.2 million microfinance project in Bangladesh. 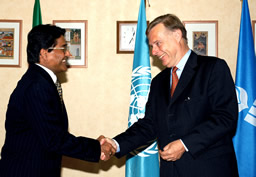 The project will be financed largely by a USD 16.3 million loan from the International Fund for Agricultural Development (IFAD) to the Peoples Republic of Bangladesh. Signing the loan agreement today at IFAD headquarters with the Ambassador of Bangladesh to Italy, H.E. Mr. Mohammad Ziauddin, the IFAD President, Mr. Lennart Båge, highlighted the success of microfinance programmes in Bangladesh.

Microfinance programmes extend small loans at reasonable interest rates to poor people who, with limited assets and little savings would be unlikely to access credit directly from banks. In Bangladesh, microfinance programmes have had a significant impact on improving quality of life, particularly when credit is extended to women.

Microfinance is one way of fighting poverty in the places where the poorest people live, said Mr. Båge. In Bangladesh, it has been shown that a series of four of five loans can lift a household out of poverty.

Women account for more than 90 percent of the recipients of microfinance in Bangladesh, and numerous studies have shown that these small loans lead to the empowerment and improved status of women. It has also been shown that when women are the borrowers, the benefits also translate into improved quality of life for children.

The goal of the seven-year project is to improve the livelihoods and food security of poor rural households, by providing income and employment opportunities, by improving access to essential services and resources, and by providing opportunities to develop skills and knowledge.

It will benefit 276,000 households. Women, especially women without access to land, will be the main target group.

About 80 percent of the projects total budget will go directly to beneficiaries, either as credit, or in the form of training. Credit will be accessible through 11,700 new savings and credit groups that will be created through the project.

Poor rural people will be able to use their credit to invest in any legal income-generating activity. Technical support to the target group, including training in livestock production, will help to ensure the success of income-generation initiatives. IFADs past experience has shown that investment in livestock accounts for up to 40 percent of all micro loans, and is the major microfinance investment for which IFAD target groups need technical knowledge. Livestock represent an especially good investment for the landless poor, in particular for women, who have the major responsibility for livestock production and managing the income generated.

The local agency taking the lead in implementing the project is the Palli Karma-Sahayak Foundation (PKSF), one of the worlds best examples of an autonomous microfinance apex institution. Established by the Government of Bangladesh in 1990, the PKSF channels donor and government funds to non-governmental organizations for microfinance programmes. To implement the project, PKSF will work closely with non-governmental organizations and private sector institutions in Bangladesh, which will be contracted by the project to deliver services to poor rural people.

With this project, IFAD will have financed 21 projects in Bangladesh, totaling USD 325 million.

IFAD is a specialized agency of the United Nations dedicated to combating rural poverty in the most disadvantaged regions of the world. Since 1978, IFAD has financed 625 projects in 115 countries and in the West Bank and Gaza for a total commitment of approximately USD 7.9 billion in loans and grants. Through these projects, about 250 million rural people have been supported in their efforts to overcome poverty.