Microentrepreneurs to benefit from IFAD project in Rwanda

Microentrepreneurs to benefit from IFAD project in Rwanda

Rome, 3 November 2003  Small-scale entrepreneurs in poor rural areas of Rwanda will be given a boost by a USD 17.6 million project that will focus on development of microenterprises. 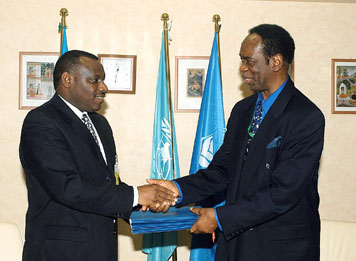 The seven-year project will be financed largely by a USD 14.9 million loan from the International Fund for Agricultural Development (IFAD) to the Rwandese Republic. The loan agreement was signed today at IFAD headquarters by the Secretary General of the Ministry of Finance and Economic Planning of Rwanda, His Excellency, Mr Claver Gatete and the IFAD Vice President, Mr Cyril Enweze.

The project will support rural poor people who are already involved in microenterprises, by offering training and other support on request. It will also strengthen the capacity of grassroots professional organizations and rural finance services to respond to the needs of local microentrepreneurs. Particular attention will be given to very vulnerable groups including women, landless people, unemployed youth, orphan-headed households and families affected by HIV/AIDS.

In the long term, the aim is that rural poor people will be able to rely more heavily on microenterprises to supplement their incomes, particularly in areas where high population density puts pressure on the land. The project will also contribute to diversification of Rwandas economy by promoting development of the secondary and service sectors. Growing demands on these sectors have already led to new opportunities for self-employment, especially in areas such as small commerce, handicrafts and repair shops.

The project will gradually expand to cover the entire country.

With this loan, IFAD will have provided a total of USD 111.75 million in support of 11 projects in Rwanda.

IFAD is a specialized agency of the United Nations dedicated to eradicating rural poverty in developing countries. Since 1978, IFAD has financed 625 projects in 115 countries and territories for a total commitment of approximately USD 7.7 billion in loans and grants. Through these projects, about 250 million rural people have been supported in their efforts to overcome poverty.