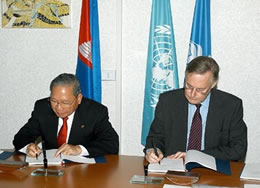 Rome, 19 December 2003  Some of the poorest people in Cambodia will benefit from a USD 19.6 million project that will focus on agricultural investment and local development, including building the capacity of the poor and their organizations to plan for their own social and economic development.

The project will be financed largely by a USD 15.5 million loan from the International Fund for Agricultural Development (IFAD) to the Kingdom of Cambodia. The loan agreement was signed today at IFAD headquarters by the Senior Minister and Minister of Economy and Finance, Kingdom of Cambodia, His Excellency Mr Keat Chhon, and the IFAD President, Mr Lennart Båge.

The project area covers two of Cambodias poorest provinces, Prey Veng and Svay Rieng and is expected to reach almost 700,000 people. People in these provinces are poor because they lack access to sufficient productive resources, such as land and livestock. There are also limited opportunities to earn an income through off-farm employment or other income generating activities. Lack of health services and poor access to markets are among the other problems contributing to poverty in the area.

The project will target poor communes that are particularly vulnerable to flooding and drought. It will focus on strengthening the capacity of local communities and newly-elected commune councils. Another important component will be agricultural development, particularly though improved market-oriented on and off-farm production. It will encourage diversification to reduce dependence on a single rice crop, by promoting increased livestock production, especially of pigs and chickens, and increased food production in homestead gardens.

The project will use the Commune Infrastructure Development Fund to pilot decentralized institutional arrangements for channelling funds to commune councils and for service delivery in response to needs and priorities of local poor people. It will also work with the Seila Task Force Secretariat and the Ministry of Agriculture, Forestry and Fisheries to provide a forum for discussion with the government on policy and operational issues related to decentralization, agricultural development for rural poverty reduction and the allocation of more development resources to poor communes.

The project is also supported by the United Nations World Food Programme and the Partnership for Local Governance Project.

With this project, IFAD will have financed 4 projects in Cambodia, totalling USD 38.84 million.

IFAD is a specialized agency of the United Nations dedicated to eradicating rural poverty in developing countries. Since 1978, IFAD has financed more than 625 projects in 115 countries and territories for a total commitment of approximately USD 7.7 billion in loans and grants. Through these projects, about 250 million rural people have been supported in their efforts to overcome poverty.