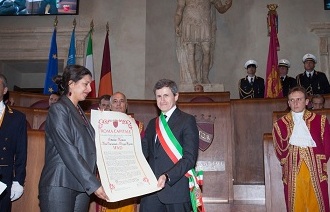 Rome, 21 April  2013 – The three Rome-based UN agencies – the Food and Agriculture Organization of the United Nations (FAO), the International Fund for Agricultural Development (IFAD) and the World Food Programme (WFP) – were made honorary citizens of Rome today.

The Mayor of the City of Rome, Gianni Alemanno, presented the award at a ceremony held in the City Hall on the occasion of the 2766th anniversary of Rome's founding. He cited the City's "appreciation for the three agencies' consistent commitment to the fight against hunger and poverty, in support of food security and sustainable development and for the improvement of the living conditions of rural populations".

FAO Director-General José Graziano da Silva, speaking on behalf of the three Rome-based agencies, said the City's support to them has been crucial.

Rome -- an inspiration and pleasure 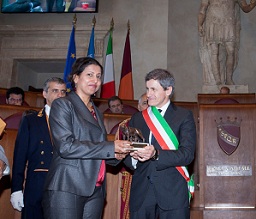 "Your rich traditions, including the value you place on local food and agriculture, have been an inspiration for us. And also a pleasure," he declared.

"I am convinced that one day, FAO, IFAD and WFP will add another footnote to Rome's great history. One that says that, together, we helped to eliminate chronic hunger, malnutrition and extreme poverty," Graziano da Silva continued.

"Thank you, Rome, for being a friend to us all," he added.

The three agencies have different mandates but collaborate to improve food security and alleviate hunger worldwide. FAO moved its headquarters to Rome from the U.S. in 1951; ten years later, FAO gave birth to the World Food Programme, which has kept its headquarters in Rome. And IFAD, which funds agricultural development projects primarily for food production in developing countries, has been based in Rome since its inception in 1977.

Press release No.: IFAD/20/2013
The International Fund for Agricultural Development (IFAD) works with poor rural people to enable them to grow and sell more food, increase their incomes and determine the direction of their own lives. Since 1978, IFAD has invested about US$14.9 billion in grants and low-interest loans to developing countries through projects empowering over 410 million people to break out of poverty, thereby helping to create vibrant rural communities. IFAD is an international financial institution and a specialized UN agency based in Rome – the United Nations' food and agriculture hub. It is a unique partnership of 172 members from the Organization of the Petroleum Exporting Countries (OPEC), other developing countries and the Organisation for Economic Co-operation and Development (OECD).