Rome, 12 June 2003  Some of the poorest people in the Dominican Republic will benefit from a USD 24 million programme that will focus for the first time on the countrys border areas. 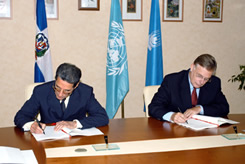 The border areas of the Dominican Republic are home to many of the countrys extremely poor rural people. The goal of the programme is to reduce poverty in the region, mainly by strengthening the organizations of the rural poor, so that they are better able to contribute to sustainable social and economic development.

Another important first is that the programme will include measures to improve health and sanitation, such as provide better drinking water pipelines, as ways to combat HIV/AIDS.

The programme will operate in six provinces close to the Haitian border - Monte Cristi, Dajabon, Pedernales, San Juan, Barahona and Santiago Rodriguez. The rural poor in the area include small-scale and landless farmers, operators of small businesses, seasonal labourers and agricultural workers. About 35 000 people will benefit directly from the programme, including 9000 extremely poor people living in bateys, settlements of seasonal migrant workers of Haitian origin. The programme will also support the development of small rural enterprises, training and technical schools.

With this programme, IFAD will have financed six projects in the Dominican Republic totaling USD 62.1 million in loans.

IFAD is a specialized agency of the United Nations dedicated to combating rural poverty in the most disadvantaged regions of the world. Since 1978, IFAD has financed 625 projects in 115 countries and in the West Bank and Gaza for a total commitment of approximately USD 7.9 billion in loans and grants. Through these projects, about 250 million rural people have been supported in their efforts to overcome poverty.