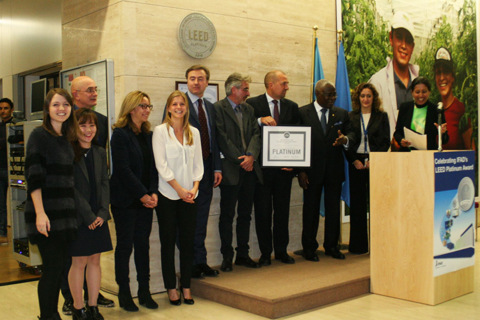 Rome, 16 November 2015 - The UN's International Fund for Agricultural Development (IFAD) announced today that it has been awarded Platinum certification by the United States Green Building Council (USGBC), which recognizes Leadership in Energy and Environmental Design (LEED®) for Existing Buildings: Operation and Maintenance.

LEED is one of the world's top green building rating systems and the Platinum level is the highest level of certification. IFAD is the first UN entity to achieve Platinum certification in this category.

In line with the United Nations "Greening the Blue" initiative, IFAD began working to make its headquarters more environmentally friendly in 2009, striving at first for a LEED certificate of sustainability. Thanks to its efforts, which included reducing energy, water and paper consumption, encouraging staff to carpool or use public transportation, and introducing environmental friendly policies such as minimizing use of toxic cleaning products, by 2010 IFAD was awarded LEED Gold certification.

"Since 2010 IFAD has drastically reduced its energy consumption as well as our carbon emissions from 5579 tonnes to 3930 tonnes," said IFAD's President, Kanayo F. Nwanze, at today's award ceremony. "As we get ready to participate in the global climate talks (COP21) in Paris, we will be doing so as one of the few UN agencies which is officially recognized as climate neutral."

To compensate for  global emissions that cannot be avoided, for example when staff must travel by air, IFAD has invested in carbon offsets through the United Nations Framework Convention on Climate Change (UNFCCC). At the same time, IFAD actively encourages staff to use modern technologies such as teleconferencing, instead of travel, to further reduce emissions where possible.

To reach its greening goals, IFAD has been collaborating with Habitech, a consulting firm specializing in sustainable management of premises, since 2009.

"By following Habitech's recommendations over the past five years, IFAD has seen very tangible results," explains Gianni Lazzari, CEO of Habitech. "We need more organizations to follow IFAD's example if we are to effectively fight global climate change."

Nwanze thanked the Government of Italy for providing the IFAD building and supporting efforts over the years to make it greener. He also thanked
staff for their active engagement in adopting sustainable practices in their daily work.

Although IFAD has now attained the highest LEED award available, Nwanze said his organization will continue to explore and introduce new green initiatives, leading the way for other UN agencies.

The International Fund for Agricultural Development (IFAD) invests in rural people, empowering them to reduce poverty, increase food security, improve nutrition and strengthen resilience. Since 1978, we have provided nearly US$17 billion in grants and low-interest loans to projects that have reached about 453 million people. IFAD is an international financial institution and a specialized United Nations agency based in Rome – the UN's food and agriculture hub.