Revitalizing the practice of shifting cultivation: A conversation with Dr Dhrupad Choudhury

Revitalizing the practice of shifting cultivation: A conversation with Dr Dhrupad Choudhury 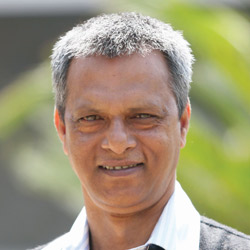 Shifting cultivation is an indigenous food system practiced by millions of people across south and south-east Asia. Considered for decades to be environmentally destructive, it is now widely recognized that shifting cultivation, when well managed, can be beneficial to both communities and the environment. Recently, for example, it was recognized as one of eight potential “game changer” food systems for Agenda 2030. However, fully reversing the prior perceptions of shifting cultivation and revitalizing it with an eye toward the future remains an uphill challenge.

For over 22 years, IFAD has collaborated with ICIMOD on themes related to nutrition, food security, indigenous peoples and climate change. Most recently, the two agencies have jointly produced a resource book designed to guide policymakers and development professionals in sustainably transforming shifting cultivation.

We spoke with Dr Dhrupad Choudhury, author of the book and an expert in shifting cultivation, to learn more about the strengths of this practice and the challenges inherent to revitalizing it.

Q. Shifting cultivation has often been misunderstood. Can you tell us a bit more about the practice?

Dr Dhrupad Choudhury (D.C.). Shifting cultivation is a rotational agriculture and forest management system practiced sequentially on the same plot of land. First, an area of fallow forest is cleared for cultivation. After being used to grow a variety of crops for a year or two, the area is allowed to lie fallow for a period of rejuvenation, while the farmer moves on to a new plot of land. With time, the forest regenerates on the previous plot, and the farmer returns to it at the end of the fallow cycle.

Unfortunately, serious misconceptions about shifting cultivation have persisted for many years. Early misunderstandings led researchers to conclude that cultivators simply “abandon” their fields after one or two harvests. This made it appear that the practice was destructive and economically unviable, and that it was contributing to deforestation and soil erosion.

Q. Recent insights into the science behind shifting cultivation and a better understanding of its impacts have led to a new appreciation of its sustainability and resilience. Could you speak more about that?

D.C. Shifting cultivation has three fundamental attributes in this regard. The first is its rich agro-biodiversity. Even in its short-cycle form, it allows farmers a diverse harvest of 20–30 crops (sometimes more than 40), cultivated simultaneously throughout the year. This mixed cropping allows for year-round food availability and dietary diversity. It also enables farmers to avert risks and is central to weather mitigation and pest management. Crop diversity is especially important: the crops used in today’s shifting cultivation are the building blocks of tomorrow’s stress-tolerant crops, essential to combating the climate crisis.

The second is its unique land use practices: the sequential alternation of agriculture and fallow forestry on the same plot. The Scientific Group of the UNFSS has called for a better integration of food systems with forest systems. Shifting cultivation already does that – in fact, it’s the epitome of such integration. This integration effectively neutralizes land degradation, contributes to long-term sustainability, and ensures the resilience of the food system and the farmers.

The third is its built-in tenure system. Shifting cultivation functions under the principles of common property, in which ownership remains a community right held by the clan or village and land is allocated to families according to household size. Each family’s tenure rights are inheritable, but not transferable to outsiders. This system ensures universal access to land and resources in an egalitarian and equitable manner.

Q. How can we overcome the challenges facing the revitalization of shifting cultivation?

D.C. We need to change the narrative surrounding shifting cultivation to one that promotes its strengths. This will require intense, dedicated engagement between development agencies, governments, academia, and indigenous peoples to showcase good practices and formulate strategies for the revitalization of shifting cultivation. Knowledgeable researchers and practitioners need to be included for objective, informed views. These engagements should also lay the groundwork for policy reforms.

Q. What steps should be taken by development agencies and governments over the long term to improve the sustainability of shifting cultivation?

Development agencies have an important role to play in advocating for governments to increase investments in shifting cultivation, and in nudging research institutes to focus more attention on it. They are also crucial for bringing together other development agencies, international financial institutions, and governments to help change the perceptions of shifting cultivation and champion the need to restructure development programme approaches to manage change.

Q. In your view, how can publications like your resource book contribute to managing the sustainable transformation of shifting cultivation?

D.C. Very few people in the international development, policy, and environmental spheres are familiar with the practice, and fewer still understand the ways in which more “modern” agricultural approaches could adversely affect this food system, the ecosystems in which it is practiced, and the culture and identity of its cultivators. This lack of awareness is the root cause of the present state of affairs.

Our resource book, along with our series of policy briefs, draw from findings gathered over the past several decades to raise awareness, enhance sensitivities and provide a framework for avoiding the “pitfalls” of transition, thereby helping retain the strengths of this indigenous food system as it transits through time. Ultimately, we hope our work will provide useful insights that can help contribute to the revitalization of shifting cultivation food systems.