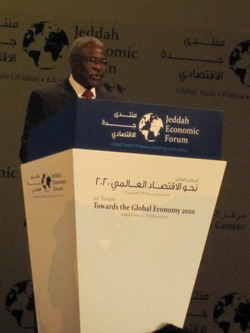 I would first like to thank the Governor of the Mecca province, His Royal Highness Prince Khalid Bin Faisal al-Saud, H.E. Abdullah Ahmad Zainal Alireza, Minister of Commerce and Industry, H.E. Sheikh Saleh Kamel, Chairman of the Board of the Jeddah Chamber of Commerce and Industry, and Mr. Abdulaziz Sager, Chairman of the Gulf Research Center. I am deeply honoured to have this opportunity to take part in today's inaugural session of the Jeddah Economic Forum.

The Kingdom has set a remarkable example in providing concessional development assistance both in terms of total Official Development Assistance and percentage of GNI. Your role in international cooperation for development and poverty eradication is also reflected in your unerring support to IFAD over the years and I should like to acknowledge the central role that your country plays in our work in the fight against poverty.

The recent food and financial crises had the effect of pushing the number of people going hungry every day to over one billion. An historic high – but not a record to be proud of.

The roots of this dire situation go back 30 years, when there was a growing perception that agriculture was unprofitable or simply unimportant. Investment in the sector declined. In 1979, aid to agriculture was 18 per cent of total assistance. By 2008, it was just 4.36 per cent. During the same period, developing country governments' domestic investment in agriculture also fell, by one third in Africa and by as much as two thirds in Asia and Latin America.

In 2008, the situation came to a head when global food prices soared to historic levels. Faced with unaffordable food prices, riots broke out in more than 40 countries. But food affordability was not the only problem. As exporting countries began to impose export restrictions, the prospects of basic food staples not being available on the global market also sent shock waves through countries dependent on food imports. The inseparable link between food security and national and global security was suddenly made very clear.

Fortunately there are signs that the economic downturn is slowing, or even in reverse, although any recovery will be highly vulnerable to further shocks.

But food prices remain high and remain volatile. And unemployment rates are also high.  Which is why there is no room for complacency. If we have learned anything from the experience of the past two years, it is that trends are caused by long-term action – or, indeed, inaction.

So, what does the future hold? What we can we expect in 2020 and beyond?

So, as we enter the second decade of the second millennium, the consequences of inaction are frighteningly clear. But action taken today can make a difference tomorrow.

The L'Aquila Food Security Initiative is a step in the right direction. It proposes a concerted and coordinated international effort to improve agricultural production and productivity in developing countries. And it promises to invest US$22 billion over three years, focusing heavily on smallholder farmers and poor rural people whose lives and livelihoods depend on agriculture.

t's a start. A good start. But much more needs to be done.

What we have witnessed over the past two years is that, without sustained investment, the agricultural sector cannot achieve its production potential. And without sufficient food production, food security quickly becomes a global problem.

So what action is needed today, to guarantee food security and economic prosperity tomorrow? I propose five areas for action:

First, the focus of international and domestic investment needs to shift back to agriculture.

The FAO estimates that average annual net investment in agriculture will need to reach $83 billion a year – a 50 percent increase – if the world is to meet its food needs by 2050.

Agriculture has driven economic growth through the centuries, from 18th century England, to 19th century Japan to 20th century India, to Viet Nam today. GDP growth generated by agriculture has been shown to be at least twice as effective in reducing poverty as growth in other sectors.

Second, agricultural investment needs to focus on the smallholder sector – in particular young people and women.

Three-quarters of the world's poor people live in rural areas. And the vast majority depend either directly or indirectly on agriculture for their livelihoods. In other words, poor rural people are a big part of the global poverty problem.
In spite of this, poor rural people – in particular women – produce the daily food of two billion people, or one third of humanity. And they farm about 80 per cent of the farmland.  Imagine then how many they could feed with the right support? Our experience has shown that – with the right support – smallholder farmers can double or triple their production. In other words, they have the potential not only to feed themselves and their own communities, but also to contribute to wider food security beyond their national borders.
Indeed, smallholder farmers are often extremely efficient producers per hectare, and can contribute to a country's economic growth and food security. For example, Viet Nam transformed itself from a food-deficit country to the second-largest rice exporter in the world by developing its smallholder farming sector. As a result, poverty fell from 58 per cent in 1979 to 15 per cent today.

In other words, while poor rural people in developing countries are today's victims of the food security problem, they have the potential to be tomorrow's solution to it.

In the Arab region, this is particularly true of young people: 58 per cent of the total population in the region is below 25 years of age, and about a third is below 15.  Young women and men also make up a large proportion of the rural population. This is the gender and the generation that will grow tomorrow's food. We need to invest in them and their institutions – today. We need to invest in opportunities for them to transform their small-scale farms – irrespective of size – into competitive agro-businesses. To do so, we need to invest in improving their access to markets and to financial services.

Third, our investment in smallholder farming needs to address each link of the value chain – from farm to fork.

In order for smallholder farmers to contribute to food security and economic growth they need secure access to land and water. They need access to rural financial services to pay for seed, tools and fertilizer. They need roads and transportation to get their products to market. They need technology to receive and share the latest market information on prices.

Fourth, our investment in smallholder agriculture needs to factor in climate change.

Smallholder farmers need to be able to protect their livelihoods from the ravages of climate change. Climate change threatens to undermine the very basis of food production.

For a region that is mostly rain fed, the consequences of climate change on agricultural production in this part of the world are challenging. But while agricultural production is being threatened by climate change, food demand in the region continues to grow as a result of high population growth -- projected at 1.7 per cent annually compared with 1.1 per cent worldwide.

Increased standards of living and – more troubling — the degradation of land and water resources are also putting pressure on food production.

And fifth, we need to be innovative with our investments.

Investment in agriculture can come in many forms. There are mutually beneficial relationships to be formed between land-poor and land-rich countries. In the last two years we have witnessed land-poor countries wishing to enhance their food security by investing in large commercial farms in land-rich countries to grow food crops for their domestic markets.

The aim should be to develop innovative forms of collaboration in which large numbers of smallholder farmers can organize themselves as a counterpart to the foreign investor. The latter would then be able to make investments for infrastructure, including roads and irrigation, the provision of fertilizers, seeds and other inputs, to enable the smallholder farmers to increase their production sharply.  In return, in a medium-term arrangement, the farmers would provide assured supplies on agreed market-related prices.

In other words, if properly handled, such large investments – including resources tapped from Sovereign Funds – can lead to a "win-win" outcome for all concerned. They have the potential to support broader agricultural development, by mobilizing resources for much-needed investments. And not only in large commercial enterprises. Land deals can be done in ways that do not impact negatively on the smallholders or the landless — better yet, they can improve the lives of poor rural women and men by creating jobs, improving technologies and productivity and improving market access.

What is critically important, however, is that investments in the agricultural sector should respect the rights of existing users of land, water and other resources. Investments should protect and improve livelihoods at the household and community level. And investments should not harm the environment.

To help achieve this, IFAD has been working with the World Bank, FAO and UNCTAD to draw up what we have titled: "Principles for Responsible Agricultural Investment that Respects Rights, Livelihoods and Resources". Our recommendations cover seven areas:

It is a work in progress, which we hope will culminate in agreed codes of practice by the major sets of private actors.

What is IFAD doing?

Throughout my travels over the past 10 months – to the Middle East, to the USA and Canada, to Brazil, China, India and Japan, to the various G8 meetings in Italy, to Copenhagen and recently to Davos, I have been working to ensure that the interests of the world's smallholder farmers in developing countries around the world are represented.

I have sought – and will continue to seek – to mobilize more funds from IFAD's members. I am, of course, deeply grateful to our members for their pledges for IFAD's eighth Replenishment, not least Saudi Arabia, whose US$50 million pledge 12 months ago represents a 400 per cent increase over IFAD7. Under IFAD8, therefore, we will be able increase our programme of work by 50 per cent.

But I should like IFAD to do more, because there is much more that needs to be done. And for this to be accomplished further support is needed from our member states, development partners, private sector and foundations.

I have sought – and will continue to seek – to attract greater involvement from the private sector. While I was in Davos last month, I highlighted to the CEOs and business leaders the mutual benefits of forming partnerships with small producers. Much-needed capital investment from the private sector can enable smallholder farmers to provide the same private sector with a sustainable supply of high-quality agricultural produce. There is the potential for an effective symbiotic relationship.

Indeed, the private sector has a pivotal role to play in rural development throughout the developing world. But public-private partnerships must be backed up with the right policies and support for rural communities, so that poor rural people can increase food production, improve their lives and contribute to greater food security for all.

In other words, if we are to generate a global economic recovery; if we are to achieve global food security, we need to focus our collective attention on agriculture – and in particular on smallholder agriculture.

In this regard, I am delighted to inform you that earlier today Dr Ahmed Ali, President of the Islamic Development Bank and I signed a US$1.5 billion co-financing framework agreement that will enable IFAD and the IsDB to join hands in financing priority projects and programmes in many of our neediest member states.

The countries of this region set an example of what can be achieved through effective collaboration. Your collective contribution over the years to IFAD's mission has been immense. I look forward to intensifying our strategic partnership over many more years.