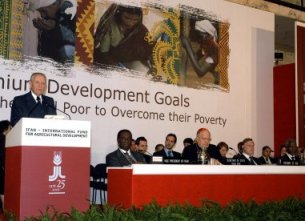 It is an honour to inaugurate this Session of the Governing Council commemorating the 25th Anniversary of IFAD, in the presence of the United Nations' Secretary General and His Eminence the Secretary of State of the Holy See, and such a distinguished international gathering.
I wish to offer you my cordial greetings, my solidarity and my encouragement for your work here.
Your conclusions will be decisive for living conditions and the dignity of hundreds of millions of human beings.

Over the past twenty years, the world population has grown by over one and a half billion. In global terms the planet's population has risen, and the numbers of people living below the minimum subsistence level has fallen.

Hunger and poverty are afflicting whole regions and populations on our planet; they cannot be rooted out unless growth is triggered in loco. In the industrialised countries the scourge of poverty and rural backwardness only disappeared when the countryside began producing profitably, generating incomes, trading, keeping the rural people at home by enabling them to raise their living standards, and offering them improved health and educational facilities.
IFAD was established to combat rural poverty in the developing world. For twenty-five years, the Fund has stayed firmly on course, particularly to assist the most disadvantaged populations and address post-war rehabilitation; it has reduced the vulnerability of communities whose livelihood depend on the land, and improved the status of women.

The international conferences held in the past two years, from the Genoa G8 to Doha, Monterrey, the Rome World Food Summit, and Johannesburg, have generated support and a sense of urgency, achieving encouraging results.
They have led to substantial increases in Official Development Assistance after a decade of decline. This is the first step in the right direction, but increased funding is not in itself sufficient. The real obstacle is how to do more, more rapidly, and more effectively.

The ink is still wet on the Millennium Declaration to which all of us have solemnly committed ourselves to eliminating the evils that are afflicting humanity with such devastating effects: poverty, hunger, infant mortality and the AIDS pandemic.
Almost three years on, the time has now come to take stock of the progress made.

We are making progress, but by small degrees.

At this rate, we shall fail to achieve the target of 2015 that we have set ourselves: to lift out of the throes of hunger at least half of those who are currently suffering from it. Production processes and virtuous circles must be set in motion now with the necessary dispatch, so that they can bear fruit by the deadlines that have been set for them.
Considering the time it will take to create the necessary material, human and financial growth potential in so many different parts of the world, 2015 is only one day away.

A single thread runs through all the objectives of the Millennium Declaration, revolving around the three main issues of education, health and food security.
By simultaneously improving production capacities, enhancing well-trained human resources, and raising the living standards in the countryside, IFAD has been a forerunner of the strategy set out in the Millennium Declaration.

The increasing rift between the "North" and the "South" is radically influencing the current international environment: it is the watershed on which the most acute contemporary crises originate and are fuelled.
There is no major political, economic or environmental international issue today which is not connected with the intense disquiet felt by the peoples in the South of the world.

International security and stability based on inequality have feet of clay. They need a South able to find the path to progress, taking responsibility for its own destiny, and a North totally committed to supporting it as it moves ahead.
They need, firstly, an Africa which is integrated into the world trade system and participates in the advancement of democracy and human rights.


They need an agriculture which offers prosperity, education and decent living standards, and not merely subsistence, to the many people who live in the countryside, yet still suffer from hunger.

The extreme poverty of one-fifth of humanity is morally unacceptable, and poses a threat to us all.
The dire poverty of large communities, the marginalisation of whole continents, the preclusion of whole regions from the possibility to grow, are incompatible with dialogue between nations and cultures and with economic and financial integration. They are creating destructive friction against the free movement of capital and goods, and are exerting migratory pressure which national borders are unable to contain.

After putting half a century of 'Cold War' between the East and the West behind us, we do not want the dramatic stand-off between the North and the South of the world in the 21st century.
The development of the poor countries has become the top priority of the developed countries' far-sighted foreign policy.
For Italy and for Europe, the South is second to none as a partner in the multilateral organisations and in direct relations with States and regional organisations.
The many challenges posed to the international community, and the grave threats to security and stability must be addressed without hesitation, and without any mitigation for those who place themselves beyond the rule of law. But we shall never heal the sources of instability which are proliferating around us unless we take action to foster the economic and social progress of peoples.

The International Fund for Agricultural Development plays an essential and central role.

It has the total confidence of Italy, which appreciates its specific and outstanding role.
It is unanimously recognised that rural development and combating under-nutrition are an essential and urgent component of development and poverty elimination.
The consultations for the 6th Replenishment received a positive impetus from last June's Food Summit. The one-fifth increase in IFAD's capital is a realistic target. Italy will contribute to it, remaining to the fore with the leading donor countries.

Your work can make a palpable response to the expectations of so many men and women in the world. Over 800 million people, more than two-thirds of the world's poor live in the countryside, in conditions of increasing poverty and marginalisation.

Through small and medium credit facilities, particularly loans to households and local communities closely involved in rural life, the foundations are laid for agriculture-led sustainable development.

Italy was one of the first countries to promote and implement, also officially, debt rescheduling measures for the benefit of the developing countries. I would also recall the supplementary contribution that Italy has made to IFAD to ease the debt burden of the countries using the HIPC initiative.
Italy will continue to step up cooperation with IFAD not only through her contributions to the ordinary budget but also with voluntary contributions for specific projects.

I wish to greet, with admiration and friendship, the United Nations Secretary General, Kofi Annan.
You are always welcome in Italy. Your presence here today reminds us that the mandate and the work of IFAD form part of the construction of an international society based on the rule of law and solidarity.
In the long march towards the objectives of the Millennium, IFAD is working within a system with which the whole international community identifies, and which represents one of the historic achievements of civilisation: the United Nations Organisation, flanked by the network of financial institutions and regional organisations.

The creation of the United Nations was the result of a great insight in the wake of the Second World War. We are mindful of the huge debt owed by humanity to the wisdom and foresight of those who first thought of it, and the signatory States of the San Francisco Charter.
The system is working well. There is, of course, always room for improvement, and its operations are necessarily complicated by the diversities expressed by 191 member countries.

The North-South divide, the global threats to security, and the safeguarding of the ecosystem require the United Nations to play a central and responsible part in fulfilling the mandate enshrined in its Charter.

No-one can be unaware of the grave risks facing our nations as a result of the new threats: terrorism and the proliferation of weapons of mass destruction. The Security Council has a unique and irreplaceable part to play in resolving international crises.

The younger generations have never known a world without the United Nations. Those who have known it cherish the enormous progress that humanity has made.
Unless we maintain our faith in the multilateral system and commit ourselves to making it work so that it can fully carry out its tasks, its survival may not be taken for granted.

The United Nations speaks for each and every one of us. It is our responsibility to enable it to measure up to the great responsibilities that we, the Member States, have freely decided to entrust to it.

Italy is fully aware of this. Rome, the capital of two States, is also a United Nations capital.

For us as Italians it is a source of pride that the United Nations food pole is headquartered here, spearheading the path towards the Millennium objectives, in the struggle to eradicate from the face of the earth poverty, hunger and misery, which are incompatible with the dignity of the human condition.

Making a concrete and innovative contribution to this common enterprise is the purpose of IFAD and of this meeting. I urge you, distinguished Governors, to spare no effort, and to work steadfastly to ensure that your work attains this goal.