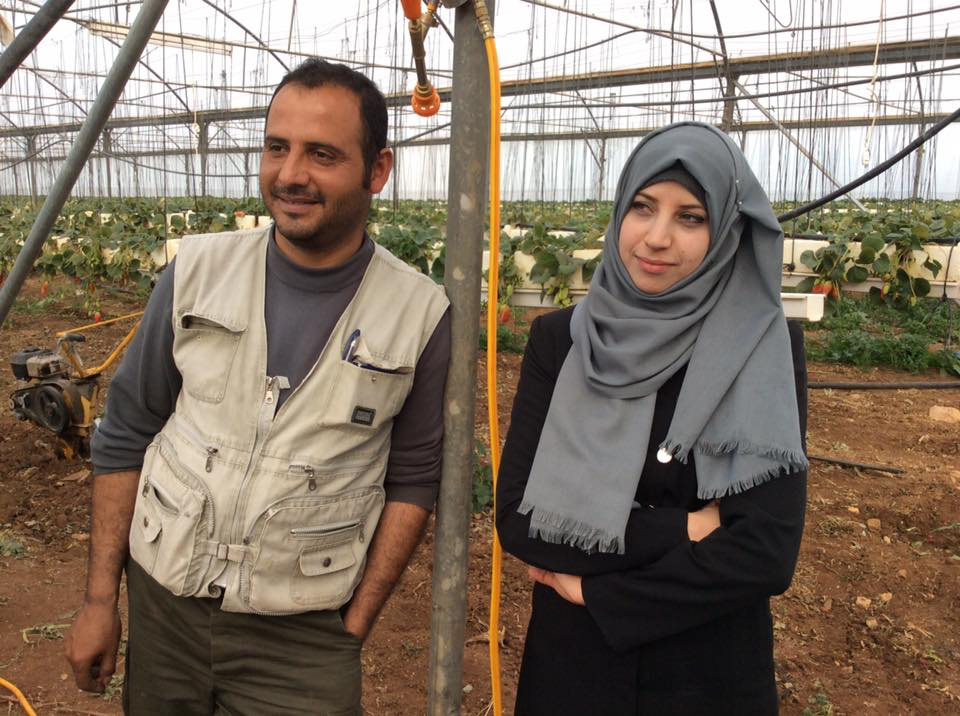 Husband and wife strawberry farmers, Raja’i and Bushra Fayyad, in their greenhouse.

18 July 2017 - Family farmers in the West Bank are growing high value crops such as almonds and apricots on once-barren hillsides, seeing their incomes rise by 80 per cent or more. About 36,000 people have taken part in an IFAD-funded natural resource management programme, which prioritized terracing, fencing, irrigation, rock removal and other techniques to reclaim and rehabilitate land. It also improved the access of rural women and men to financial services, enabling them to use credit to invest in their farms and businesses.

Over the last 15 years, the programme has invested nearly US$14 million in areas with few alternative economic opportunities, indirectly reaching almost 100,000 rural people. Land reclamation and rehabilitation have increased farm-related incomes by at least 70 per cent, while net monthly incomes of people using the programme’s credit services rose by nearly 50 per cent.

In 2005, Reyad Assad received funds to rehabilitate the hectare of land he owns in the village of Sanur. The programme helped Assad and his brothers to level, terrace and fence their land. The brothers then built three water-harvesting cisterns and planted more than 1,000 olive, almond and apricot seedlings. Since then, Assad has also begun intercropping in winter, growing vegetables and herbs. Although he is the only breadwinner in his nine-person household, he is now able to meet the family’s food needs, and his income from agriculture has doubled.

Husband and wife team Raja’i and Bushra Fayyad are strawberry farmers. Bushra applied for a loan financed by the programme to develop their greenhouse business. They invested the money in a new irrigation system and upgraded their strawberry production to use hanging containers for cultivation. This increased the space available for planting, and allowed them to double the number of seedlings they cultivated and produce an early harvest.

“The investment made a huge difference to our lives,” Bushra said. “For the first time ever, we are able to produce early and capture the highest market prices.”

The IFAD-supported Participatory Natural Resource Management Programme completed in 2015, but its approach continues to benefit rural people in the West Bank. As a result of its success, its model of land development has been mainstreamed into the government’s agriculture sector strategy and will be scaled up across the territory.

This story was originally published in IFAD’s 2016 Annual Report.