Rome, 12 March 2018 - Saada and Jerard are two young half-siblings, who were reunited through agriculture. Jerard was raised by his father in Iringa, a transport-hub in central Tanzania. Saada grew up with her mother in Itunundu, a village with 14,420 inhabitants. Despite their different upbringing, both Saada and Jerard were convinced that the only way out of poverty was through agriculture. Once they became independent, they both started cultivating paddy in Itunundu, the village of their ancestors.

Although they jointly owned seven acres of land, for many years they were trapped into poverty because of the minimal price paid by middlemen. In Saada’s own words, “There is no room for negotiation with middlemen. We are forced to accept their prices.”

Through an IFAD-AfDB programme (MIVARF), Saada, Jerard and other members of their community received business coaching. This resulted in the formulation of a group business plan to purchase a small paddy processing machine to mill rice, the third most important crop in Tanzania. This value-added activity has more than tripled the value of each kilogram of rice. Training on good agricultural practices provided by the programme also enabled them to double their production of paddy from 10 to 20 bags per acre.

Increased production and income are not always sufficient to graduate out of poverty. The real turning point for Saada and Jerard was the creation of a commercial partnership between the Agricultural Marketing Cooperative Society (AMCOS), of which Saada and Jerard are members, and the Raphael Group Ltd. (RGL), a private company based in Mbeya, a city in southwest Tanzania. This partnership, facilitated by MIVARF, has benefitted the two siblings and 146 other AMCOS farmers, whose processing equipment is maintained by a technician paid for by RGL.

RGL is one of the leading food grain processors and distributors in Tanzania. Established in 1995 as a family business, it was incorporated as a limited liability company in 2010. Today, RGL works with 6,000 smallholder farmers, of which 55 per cent are young women and men.

RGL uses a differentiated approach to recruit smallholder farmers, depending on the stage of development of their farmer organizations. For farmers like Saada and Jerard, who are members of an apex organization, RGL works through the lead farmers. Where farmers are not yet organized, RGL works with village institutions to promote the creation of cooperatives. In certain cases they even co-own and manage aggregation points with the local authorities.

Building on these developments and with support from the MIVARF programme, RGL created the Southern Highlands Rice 4P Consortium, establishing commercial relationships, not only with smallholders, but also input suppliers, service providers and financial institutions. The innovative aspect of the public-private-producer-partnerships (4P) approach is that it ensures that smallholder farmers are respected partners and not relegated to the receiving end of public-private-partnerships (PPPs).

In the words of the IFAD country director for Tanzania, Francisco Pichon: “To be successful, the 4P Consortium approach requires a diagnosis of key public and private actors and their willingness and capacities to foster partnerships. Private-sector entrepreneurs, such as wholesalers, processors and exporters, cooperative apex organizations and financial institutions, should be involved from the onset to better understand their interest and potential, and how they might internalize project incentives for their involvement and cooperation.’’

The 4P Consortium demonstrates that when commercial linkages between farmers and buyers are formalized and trust is built, off-takers can become co-investors with smallholder farmers and be instrumental in helping farmers access financial services and information on product quality which they need to add value to their produce and bring their businesses to scale. Indeed, Lazaro Mwakipesile, General Manager of RGL, noted that: “We are buyers and so we are able to inform farmers of the varieties in demand by the markets.” 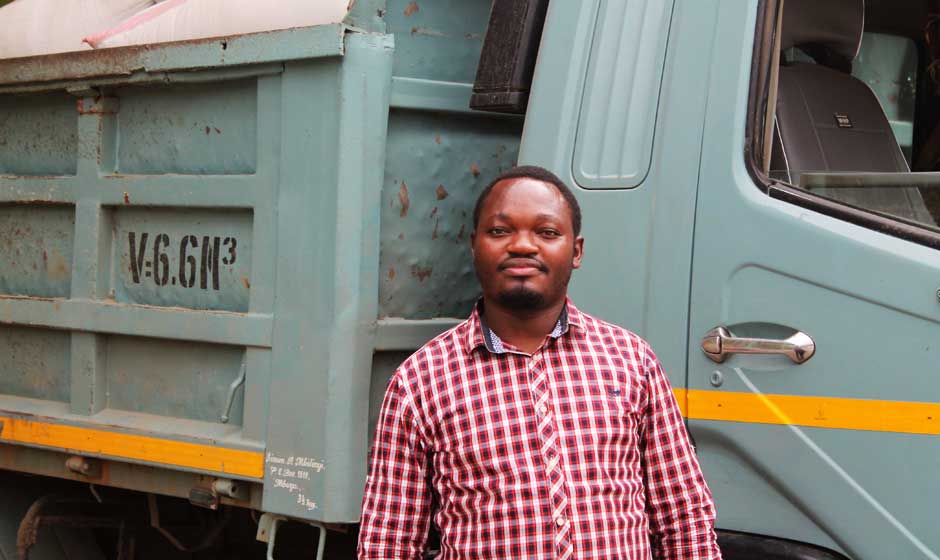 Lazaro Mwakipesile, General Manager of the Raphael Group, in front of the truck used to transport the processed products to his market partners

So far, the 4P Consortium has allowed more than 1,000 smallholder farmers, of which 60 per cent are women, to access farming loans from the National Microfinance Bank. Through capacity building provided by the programme, paddy yields increased from two to five tonnes per acre, resulting in an increase in income of US$900 per acre. Inputs procured within the consortium are also five to 10 per cent cheaper than the retail prices and the production is market driven.

MIVARF has provided the ‘road map’ for farmer empowerment and development of their organizational capacity through the 4P Consortium. As noted by Shirley Chinien, IFAD regional economist, “There is potential to replicate the success story of MIVARF’s 4P Consortium approach throughout Africa, by ensuring that the private sector works with smallholder farmers."

The experience shows that input supplies, access to finance, and marketing are not separate issues, but rather different aspects that should be addressed holistically. Smallholder farmers, like Saada and Jerard, demonstrate that by working together alongside the private sector they can transform agriculture into a successful business.