A sudden illness forced her husband to close up his business – a tea stall in their town of Dighuliapara, part of the Tangail district in central Bangladesh. Shortly before that, Hafeeza had lost a baby due to pregnancy-related complications.

Physically and mentally at her limits, 24-year-old Hafeeza knew that it nevertheless fell to her to get her young family back on their feet. They didn’t have much time – the money for their son and daughter’s school fees just wasn’t there, and they were already struggling to put food on the table. For a few days, she mulled the idea of going to the capital in search of a job, but with her husband bedridden and needing continuous help, leaving home just wasn’t possible. Hafeeza knew she would have to find a way to earn money from home.

Then an idea began to form in the back of her mind. She’d seen other women in her neighborhood raising cattle and poultry for sale on the market. They’d always seemed so proud of their business, and Hafeeza had always held them in high regard. Yet she had never given much thought to starting a business of her own – until that moment.

“But I was afraid,” she says. “Too afraid. Too many unanswered questions swarmed my mind: Where would I get the money I need to get started? What if I fail?” She’d never been involved in business before – she’d never even had the chance to finish school. She hadn’t been working outside the home before everything happened. She had no savings or property in her name, and she didn’t know anyone who’d be willing to cover the start-up expenses.

After much deliberation, Hafeeza met with a representative of the Society for Social Service (SSS), a partner organization of the IFAD-financed PACE project. He explained that PACE was working to develop a small-scale poultry industry, using indigenous varieties of chicken, across two districts of Bangladesh – and that they regularly lend money for starting new businesses.

For all her doubts, Hafeeza knew she didn’t have many avenues open to her – so she took the one that was at hand. In 2017, she borrowed 20,000 taka (about US$250) from the SSS to start her own poultry business. With that, she became one of the 350,000 microcredit borrowers enrolled in IFAD-supported projects throughout Bangladesh.

Between managing her new business and taking care of her family, the next two months passed in a blur. Hafeeza kept in touch with the PACE project staff, regularly receiving supplies such as chicken feed from them. When her first batch of chickens was fully grown, she sold them through a PACE-managed Farmer Service Centre.

Raising the chickens had been a struggle, though. They kept getting sick, and even though the PACE staff regularly supplied Hafeeza with medicines to give them, their illnesses ultimately impacted their salability. And even after the batch was fully grown and packed off to the Service Centre, Hafeeza couldn’t shake the feeling that she’d sold them at the wrong time.

And at the end of those months, her worst nightmare came true: she had failed to take in the profit she needed, meaning that she couldn’t get the expected return from her first investment. She worried that her business might never get off the ground.

She realized that she needed more training. When she first took out the loan, she had attended an orientation session that taught her the basics of farming and selling – but perhaps that wasn’t enough. Fortunately, the PACE project regularly offered additional trainings. She enrolled herself in classes on farm and feed management, disease prevention and vaccination, marketing and selling.

The end of her training coincided with her second attempt at raising chickens. This time, she took 50 days to raise 250 chicks – and when they were grown, she finally turned a good profit. Since then, she’s never looked back.

Three years later, Hafeeza and her family are thriving. She has carefully grown her farm, investing some of her profit back into it where necessary – an endeavor that she finds not only rewarding, but fun. She now owns a big house and, in addition to poultry farming, grows crops on land she inherited from her father. Her seven-year-old son is now in school, and she’s looking forward to enrolling her four-year-old daughter next year. She was even able to use some of her profits to help her husband, now fully recovered from his illness, open up a new shop selling food and tea.

“I began my new journey at a tumultuous time. My husband and I were both physically and financially devastated. But we’ve managed to put that time behind us,” she says. “Now my children get enough to eat and my husband is back to work again.” 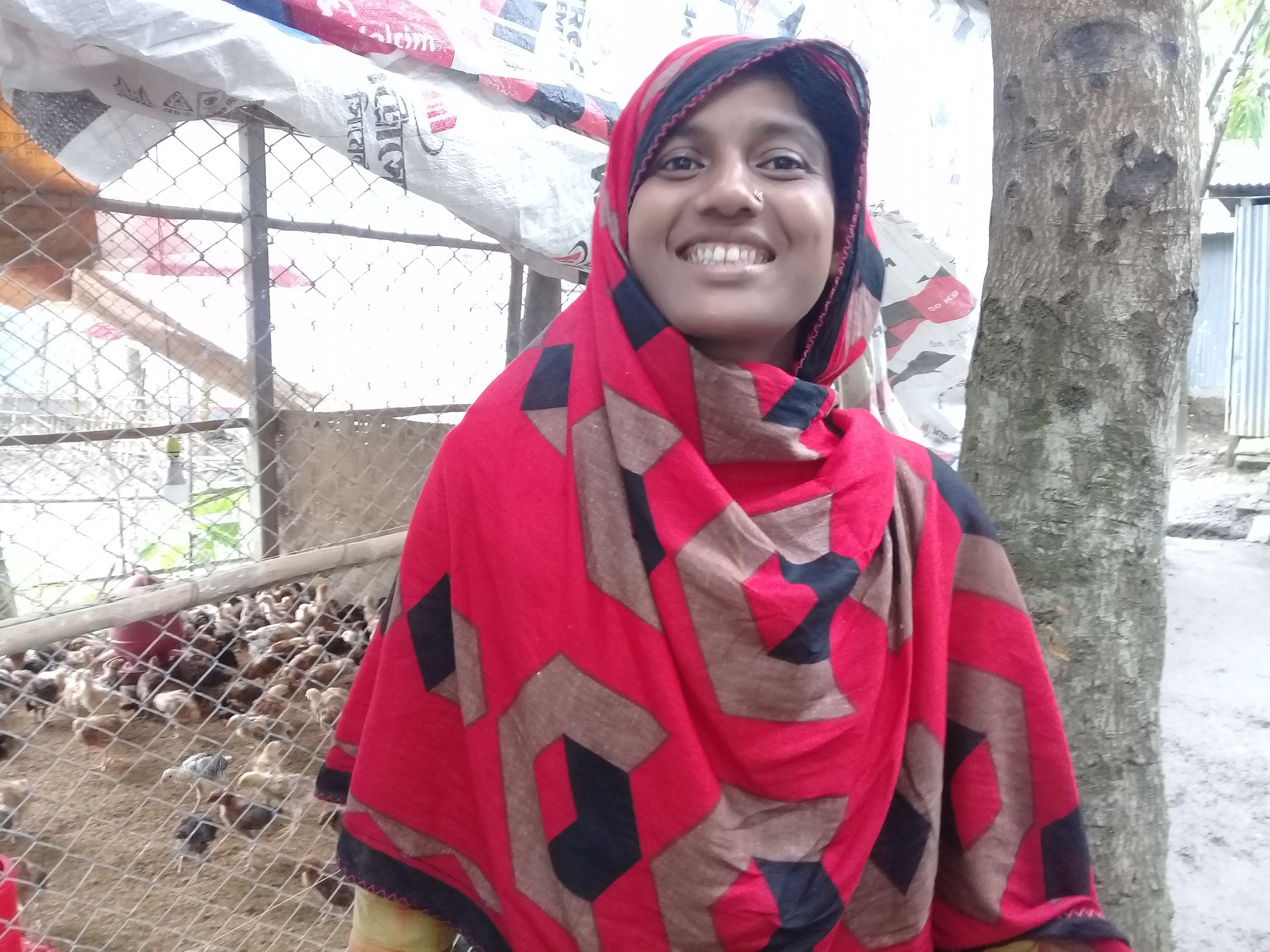 Hafeeza pauses for a photo in front of her chicken coop.

Beyond supporting her own family, Hafeeza’s work is part of a broader trend that’s revolutionizing dietary patterns, health and economic stability throughout Bangladesh. For many of the country’s young men and women, especially those on the outskirts of cities and towns, poultry farming is the only major earning source available. Many small-scale poultry farmers have managed to improve their livelihoods in recent years, often with very little support or access to resources such as financing or modern technologies. Although poverty still persists in these areas, it has been significantly reduced, with many families experiencing improved access to basic needs such as food, health care and decent housing.

These improvements in farmers’ livelihoods are due in no small part to the increased demand for eggs and poultry within the country. Once a rarity, high-protein foods such as eggs and chicken meat are now available to Bangladeshis of all income levels. These two sources alone account for 36 per cent of the entire country’s protein intake. Most recently, amid increasing calls from the country’s doctors to increase protein consumption as a way to strengthen the immune system against COVID-19, national health authorities are increasingly looking to the poultry sector as a source of affordable protein.

Today, although Hafeeza’s business is still adjusting to the effects of the pandemic, she’s as optimistic as ever. Her long-term goal of purchasing more land to expand her poultry farm and grow more crops hasn’t changed. She wants those who are struggling to know that it’s important not to lose hope or avoid opportunities to grow and learn.

With the resilience and determination she’s shown, Hafeeza hasn’t just been able to create stability for herself and her family – she’s also become part of the effort to feed her country.