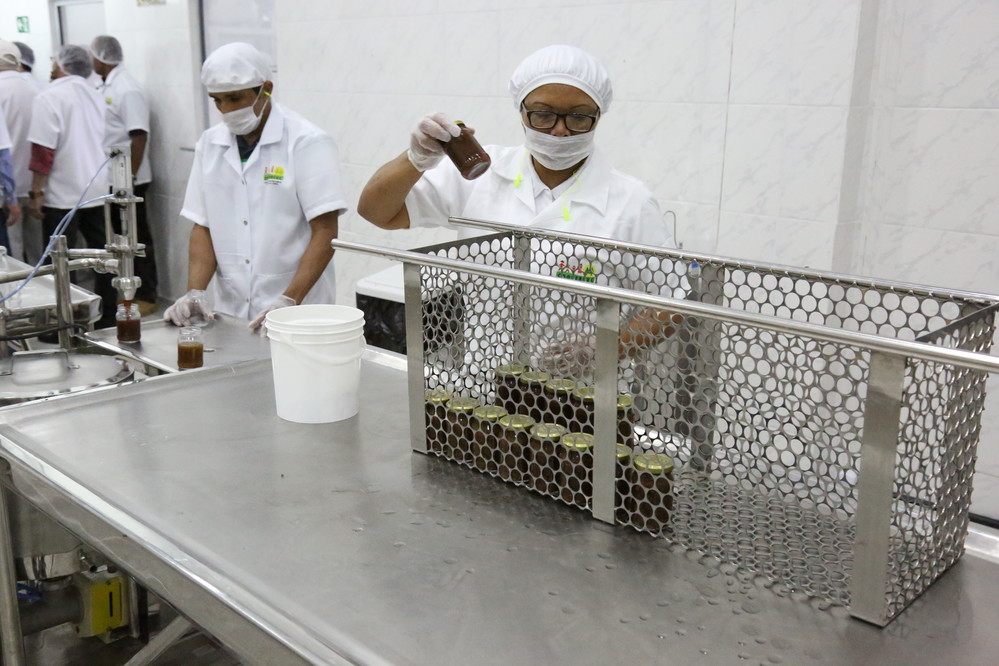 At work in COOPERCUC’s new plant, which has the capacity to process up to 500 kg of fruit every day. Brazil: Rural Sustainable Development Project in the Semi-arid Region of Bahia

17 July 2017 - Wild and local fruits, such as umbu (Spondias tuberosa), passionfruit and guava, are fuelling the growth of a prosperous cooperative led by women in a remote area of north-eastern Brazil.

More than a decade ago, family farmers in the heart of the semi-arid Sertão region came together to set up the Family Agribusiness Cooperative in Canudos, Uauá and Curaçá (COOPERCUC). At first, there was scepticism: the barren Sertão seemed an unlikely home for a profitable cooperative, especially one that processed umbu. Despite its juicy flesh, this small green or yellow fruit was seen as animal food because it grew commonly in the wild.

Today, the cooperative has about 280 members from 18 communities. Their annual sales amount to over US$280,000. They have organic and Fair Trade certifications, and through partnerships with organizations and companies such as Slow Food and L’Occitane en Provence, their products are sold around the world.

In 2015, the IFAD-funded Rural Sustainable Development Project in the Semi-arid Region of Bahia cofinanced a new processing plant. Assisted by 18 pre-processing mini-plants near the members’ communities, it has the capacity to process 500 kg of fruit every day - juicing, pulping, bottling and canning - and to prepare deliveries.

The plant also makes new products such as fruit-based ice cream and popsicles, or picolé in Portuguese, which are in high demand in the hot coastal cities of north-eastern Brazil. Because of the additional processing capacity the plant has created, 700 more farmers are expected to join the cooperative.

Today COOPERCUC is chaired by Denise dos Santos, a 26-year-old graduate whose parents were founding members of the cooperative. After completing her degree in business administration, dos Santos returned to Uauá because she wanted to give something back to her community.

“We were told that we were mad when we started using umbu and the other plants,” says dos Santos. “See where this madness has taken us! We are a prosperous company now. But COOPERCUC is not about profit. ... It’s about showing people that it’s possible to make a living in the Sertão. We are proving that beyond any doubt.”

This story was originally published in IFAD’s 2016 Annual Report.