Water was a scarce resource in this remote corner of the Himalayan nation.  “I’ve only ever seen Ngarpongtang dry,” says village leader Lhuendup. “It never rains more than 41 days a year.” When it does rain, say villagers, it is erratic, and getting more so over the years.

A spring, more than 10 km away, is the nearest reliable source of water. Until mid-2019, one canal connected the spring to the community. Families trekked for 1.5 hours for extra water to the spring. There was barely enough water to drink for the 47 households that comprise the village, or for their livestock. There certainly wasn’t enough for irrigation of anything other than maize, the staple crop, even though the agro-climactic conditions are ripe for cultivation.

Cut to 2020, and farmers like Wangdi are now growing enough vegetables to feed their families and sell in local markets. “I have a 145 sq. yard kitchen garden now,” Wangdi says. What has changed?

The government’s Agriculture Research and Development Centre (ARDC) at Wengkhar recognized that the community’s lack of access to water left them dependent on the vagaries of the weather for even the most basic of needs. A participatory vulnerabilities assessment in six districts, conducted in partnership with the IFAD-supported Commercial Agriculture and Resilient Livelihoods Enhancement Programme (CARLEP), further highlighted that the water system was an important part of building climate resilience in communities like Ngarpongtang. 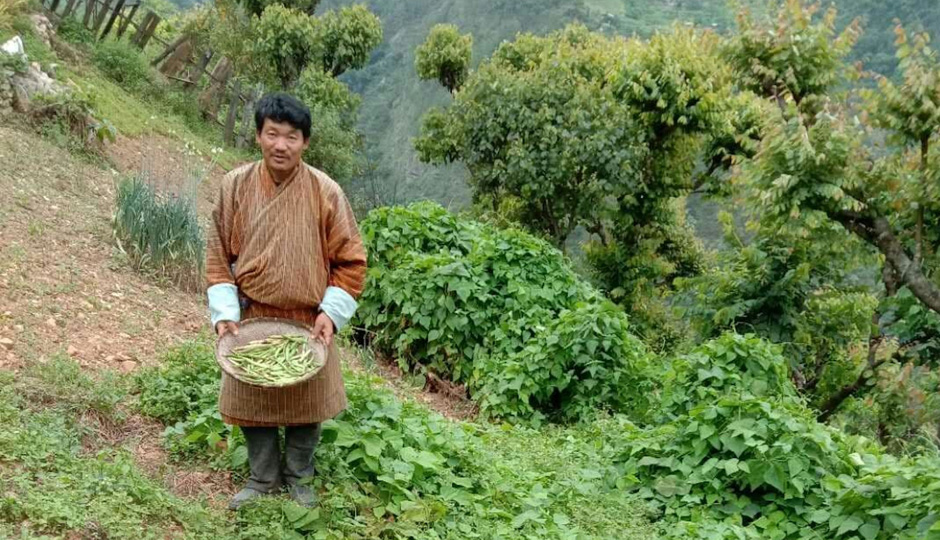 Between March and June 2019, ARDC and CARLEP projects worked together to design, construct and implement a system to harvest spring water, while community members pitched in with their labour. As a result, Ngarpongtang now boasts an underground water supply line that connects to a reservoir tank situated above the village, which further distributes water to each household’s storage tanks. The system is considered climate-resilient and the remote rural community is no longer dependant on rainfall to produce food.

Lhuendup, 42, feels that reliable water supply has given the area’s farmers a slew of new options. The new availability of water virtually on their doorsteps means they can maintain kitchen gardens in addition to rearing cattle, which would not have been possible before. “Today, we each have one water storage tank and sprinkler for irrigation. With the sprinkler, we can distribute water equally in our field and maintain our vegetable crops at the right temperature. I can think of sowing varieties of vegetables, which I couldn’t before,” he says.

Wangdi agrees. “I’ve just started getting enough water for my kitchen garden. I plan to gradually expand my cultivation area for vegetables, so I can sell more in the local market and supplement my income. Until now, I could only sell cheese, butter and eggs. It’s good to diversify,” he adds.

The agricultural extension officer for the area says this is the not only the first time farmers here have grown vegetables, but that many of them even have some left over. “Together they’ve managed a surplus of about 0.825 MT of vegetables, which is quite remarkable. They took the surplus to the local market to sell. Soon they’ll have a potato harvest as well,” Chungku says.

Many other villages in Bhutan face similar challenges of persistent water scarcity coupled with climate change-induced risks. More than half the population lives in rural areas and relies on agriculture for their livelihoods. Erratic rainfall, extreme weather, rising temperatures and the country’s mountainous topography leave some areas parched, while others see floods and landslides. The ARDC and CARLEP partnership was able to successfully identify and using appropriate technologies to address issues in Ngarpongtang. The next step is to replicate this success in other areas, so they may achieve sustainable water security – and tend kitchen gardens – too.