The Haor region is a wetland ecosystem in north-eastern Bangladesh, which is located in a tectonic depression. During the monsoon period, the Haor gets between 3,000 and 4,000 mm of rainfall, together with the flow of monsoon river from the Meghalaya and Barak basins. The Haor gets completely flooded with between four and eight metres of water for around six months of the year. At these times, the area looks like an inland sea. Densely inhabited villages are built on artificially constructed mounds of earth, and during the monsoon season they turn into islands, with boats being the primary mode of transport.

Flash floods are a common occurrence in the Haor, and during the height of the flood period the Haor is wracked with waves as high as three metres. Large-scale deforestation over the last 40 years has stripped away the natural barriers that have historically mitigated wave action. A significant part of villagers’ income and time is spent fortifying the earthen mounds and repairing their damaged homes.

Extreme weather events in 2001, 2010 and 2017 resulted in between 80 per cent and 90 per cent of crops being lost, and this situation is expected to get worse as a shift towards pre-monsoon rainfall is projected to coincide with the paddy rice pre-harvest period. This will severely affect food production in the area, which makes up over 16.5 per cent of national rice production, and is fundamental to the food security of smallholders living in Haor. Their already precarious existence is thus being further exacerbated by climate change impacts. The lack of a pre-monsoon flash flood early warning system means, at best, a three-day advance warning through family networks makes it to downstream inhabitants. This is simply not enough time to harvest rice and transport it to safe ground.

One of the key actions of the Adaptation for Smallholder Agriculture Programme (ASAP) financed component (CALIP) is to address the lack of an effective flash flood forecasting system to allow farmers to assess risk more accurately. A preliminary model has been developed by the Institute of Water and Flood Management and Institute of Water Modelling takes into account feedback on the different needs of women and men.

Villagers and market management committees are also being organized so that they can act on weather and flash flood forecasts, and special platforms are being built to store rice during flash floods. As well as this early warning system, different engineering models are being tested to protect villages against wave action. Reforestation will be carried out at the landscape level to recreate natural wave barriers and generate carbon sequestration benefits. Tests are ongoing to identify vegetative species, such as vetiver, as alternative and natural slope stabilizers and crops for livelihoods, as 10 well as for carbon sequestration. 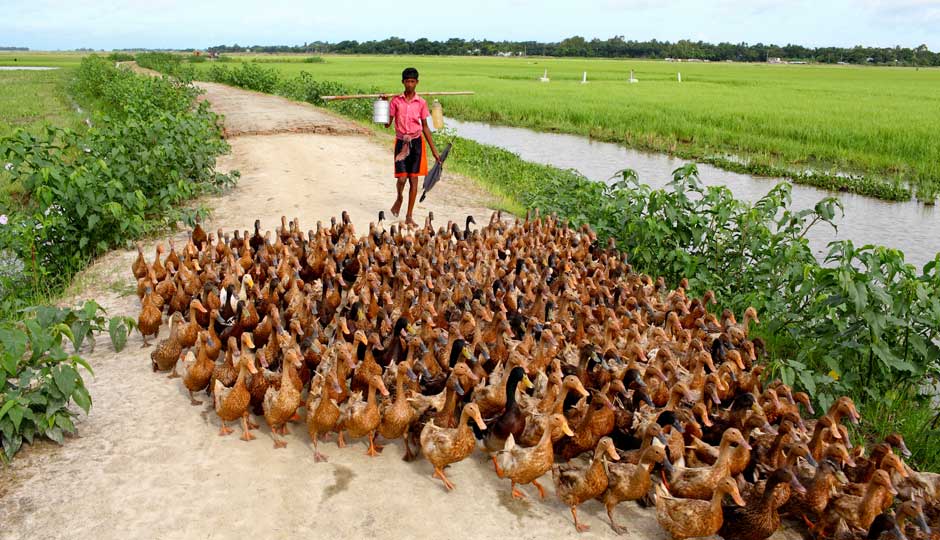 Access to clean water is always problematic during the floods, and indeed access to potable water was identified by all target groups as a top priority when the project was designed. The project is therefore improving access to basic services such as domestic water and sanitation by investing in tube wells and latrines. To make the best use of the short dry season, the project is also helping to reexcavate irrigation canals that have become silted up. Fish ponds will be rehabilitated because extensive siltation of beels (water bodies) is reducing the potential of fish catch. These actions are being completed by a range of initiatives to diversify livelihoods and build capacities.