Ruth Stephen Chileshe, a smallholder farmer from northern Zambia, stands with one of her granddaughters in front of the large iron-roofed brick house she was able to build for her family.

With her granddaughter in hand, Ruth Stephen Chileshe proudly shows off the large iron-roofed brick house she recently built selling maize, cassava, beans and ground nuts from her small farm in rural Zambia.

Only 10 meters down the pathway stands the remnants of her old and much smaller home. The roofless structure serves as a poignant reminder of the life of extreme poverty that Chileshe and her seven children have left behind.

“When my husband passed away I could not take care of my family. There was no income,” says Chileshe, 56, surveying the farmland behind her home in Lwabwa village.

“I was trying very hard to send my seven children to school but it was very difficult to pay the school fees,” Chileshe says. “We did not have enough food to eat, and I had to rely on handouts from other families."

Desperate to feed her family, Chileshe turned to small-scale farming to earn income. 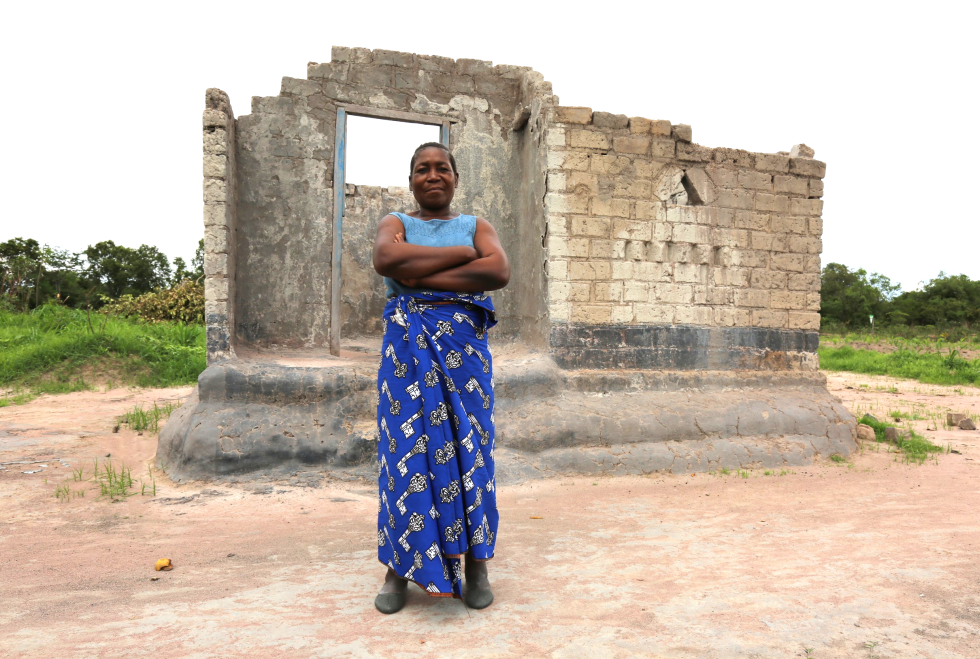 Chileshe stands in front of the remnants of her old and much smaller home which hosted a family of eight. Chileshe and her children struggled to make ends meet after her husband passed away, and she found it too labour intensive to farm large plots of land alone. ©IFAD/Simona Siad

She started to grow small amounts of maize on the land behind her house using traditional tilling techniques such as ridging to plant the seeds.

However, clearing and preparing the soil was incredibly time and labour intensive to do alone and with only a hand hoe.

“When I first started I could only plant a few square meters of crops because it was so much work to prepare the soil,” she says.

“After all that work, I would harvest the crops but there would be problems with termites. I would lose almost all of my crops because of the pests and I would lose money,” says Chileshe, who at the time was earning an annual income of 800 kwachas (approximately US$80).

A community of farmers in peril

Chileshe lives in a remote rural farming community outside the northern capital of Kasama.

For the past few years, farmers and villagers have battled extreme poverty and malnutrition due to low crop yields brought about by difficulties in tilling the land, depleted soils and deforestation.

The community is highly reliant on smallholder agriculture and grows crops such as maize, cassava and beans – staples in the Zambian diet. However,  the high cost of farming inputs (fertilizers and seeds), and the lack of farming tools and machinery such as tractors, means that the majority of farmers cannot afford to cultivate large areas of land.

Since farming by hand is so arduous, Chileshe and her fellow farmers resorted to the timeless tradition of chitemene – slash and burn agriculture – to quickly clear the land. This led to deforestation and poor soil quality, hampering local food production and putting an already hungry community into peril. 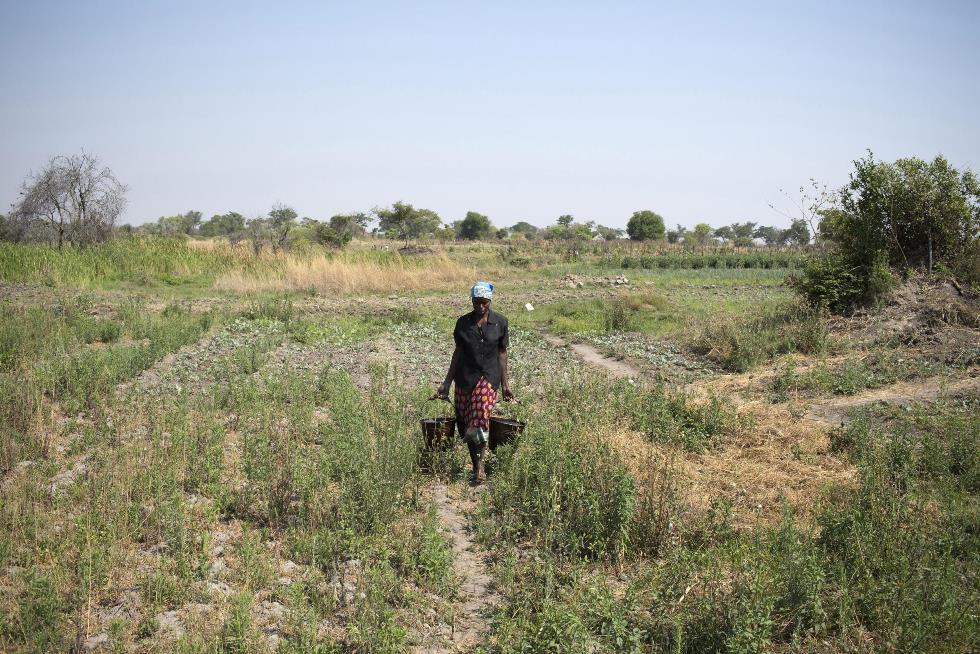 With large expanses of arable land and an abundance of water in the north, Zambia has all the ingredients to be the breadbasket of Africa.
But bringing farming into the 21st century and dealing with rural poverty remain massive hurdles.

Droughts and floods have increased in frequency and intensity over the last two decades and have had an adverse impact on food and water security, energy generation and livelihoods.

“Zambian smallholder agriculture is facing a lot of challenges,” says Martin Liywalii, the programme manager of the IFAD-supported Smallholder Productivity Promotion Programme (S3P), from his office in Lusaka, Zambia.

“Low yields and production levels, and a lack of access to quality seeds are some of the biggest issues,” he says, noting that these challenges combined with changing weather patterns are contributing to rural poverty and hunger.

According to Robert Delve, IFAD’s senior technical specialist in agronomy, African countries like Zambia have an immense potential for improving agricultural outputs and reducing rural poverty.

But he says governments need to focus on intensifying agricultural production rather than on expanding into environmentally sensitive ecosystems.

“We must produce more on the land we have without degrading the soil, cutting down trees and moving into environmentally sensitive areas,” says Delve.

“We need to support smallholder farmers so that they can stay in agriculture and see farming as a business, while using good agricultural practices that allow them to increase production without causing large-scale deforestation.”

Life began to improve for Chileshe when she was selected to be one of the farmers to receive support and training in conservation agriculture (CA) – a set of soil management practices that minimize the disruption of the soil's structure, composition and natural biodiversity.

These climate-friendly and low-cost techniques are part of the IFAD-supported Smallholder Productivity Promotion Programme. They help farmers increase their yields, decrease their labour and improve their livelihoods.

CA can be applied to a wide range of crop types and typically has three characteristics: keeping the soil covered with residues from previous harvests or specially-grown cover plant material; keeping tillage to a minimum; and rotating crops regularly.

The research-based initiative, which began in 2014, has been steadily improving income levels, and the food and nutrition security of over 38,000 rural households in the Luapula, Northern and Muchinga provinces of Zambia. 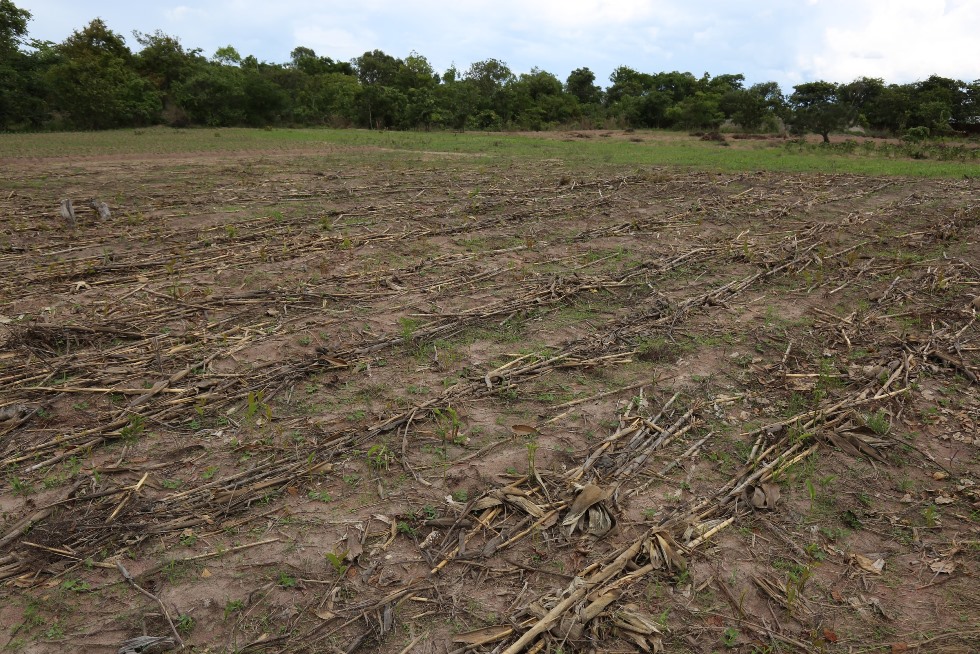 Conservation agriculture (CA) is a set of soil management practices that minimize the disruption of the soil's structure, composition and natural biodiversity. Since the north of Zambia has relatively more rainfall, the focus is not only on moisture retention but also on crop rotation and minimal soil disturbance. ©IFAD/Simona Siad

Its partners include the Government of Zambia, Total Land Care Foundation, Community Market for Conservation and the International Centre of Maize.

Chileshe received training and attended field demonstrations on conservation agriculture techniques which helped her increase yields and earn a profit for her family.

“They taught me that I do not need to spend time creating deep ridges for planting. I can just clear the land and start planting right away. It does not matter if there is grass on the land,” says Chileshe.

She also learned about site selection (which land was best to grow crops on and why); pest and disease control; how to select and grow crops that have good returns and will sell well at her local market; which crops were most nutritious for her children; and how to best harvest and store her crops.

Like many farmers, she lives in an isolated rural area and does not have access to a vehicle. The programme trained some people in her community to become seed growers so no one will have to travel long distances to buy more seeds next season.

According to the programme manager Liywalii, this is the first time there has been such a large-scale pilot conservation agriculture programme in the north of the country.

Since the north has relatively more rainfall, the focus is not only on moisture retention but also on crop rotation and minimal soil disturbance.

“Conservation agriculture is critical to environmentally sustainable farming because it allows for minimum disturbance to the soil and the environment,” says Liywalii.

“The techniques are increasing yields and saving farmers both time and labour. It is solving a very real need,” says Liywalii. “Even if farmers receive inputs such as fertilizers and seeds, if they are not using them correctly, there will not be any improvement in yields,” he continues.

IFAD has recently published a three-part conservation agriculture toolkit to help governments and organizations introduce and sustain the methods in agricultural investment projects in sub-Saharan Africa.

Michael Chishimba, the agricultural extension specialist for the project who helped train Chileshe, agrees with Liywalii.

“The major challenges Zambian farmers face is a shortage of labour. Households depend on family labour so the farmland they can cultivate is limited. Even if they have children, only the mother and the father can be productive,” he says.

“Conservation agriculture is a good solution for these farmers because minimum cultivation is needed,” he says. “It saves them a lot of work."

“Organic matter is conserved and decomposes into the soil, which enriches it. When you plant a crop, it will do really well, since there are a lot of nutrients in the soil,” he explains.

“We are promoting good agricultural practices that help decrease labour while increasing production and yields.” 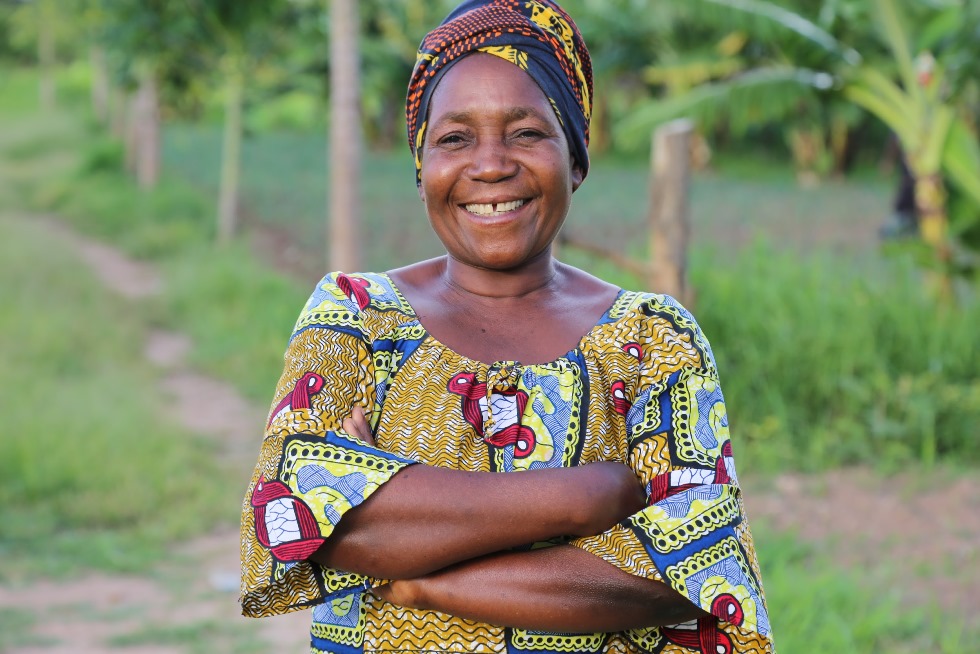 Chileshe is proud of the new life she has been able to build for her children and grandchildren.

Chileshe is not the only farmer to see a change. The programme has seen a number of farmers in the community dramatically increase yields, while reducing rates of malnutrition and enabling more children to go to the local school.

"Before it was hard for me to cultivate the land every season. The old way of farming was too hard and took too much time,” she admits.

There is less labour needed with the new way of farming, says Chileshe, so she can spend more time doing business, selling goods at the market and spending time with her family.

"Now I am able to feed my children. I am healthy and my family is healthy. The children are going to school. We don't have to worry about hunger or poor nutrition anymore," she says.

She says that she encourages other women in her community to try conservation agriculture because it is easy to maintain.

“Even someone who is a widow or who is alone can manage their farms and their lives. If the soil is kept well, it becomes rich.”

IFAD has recently published a three-part conservation agriculture toolkit to help governments and organizations introduce and sustain these methods in agricultural investment.