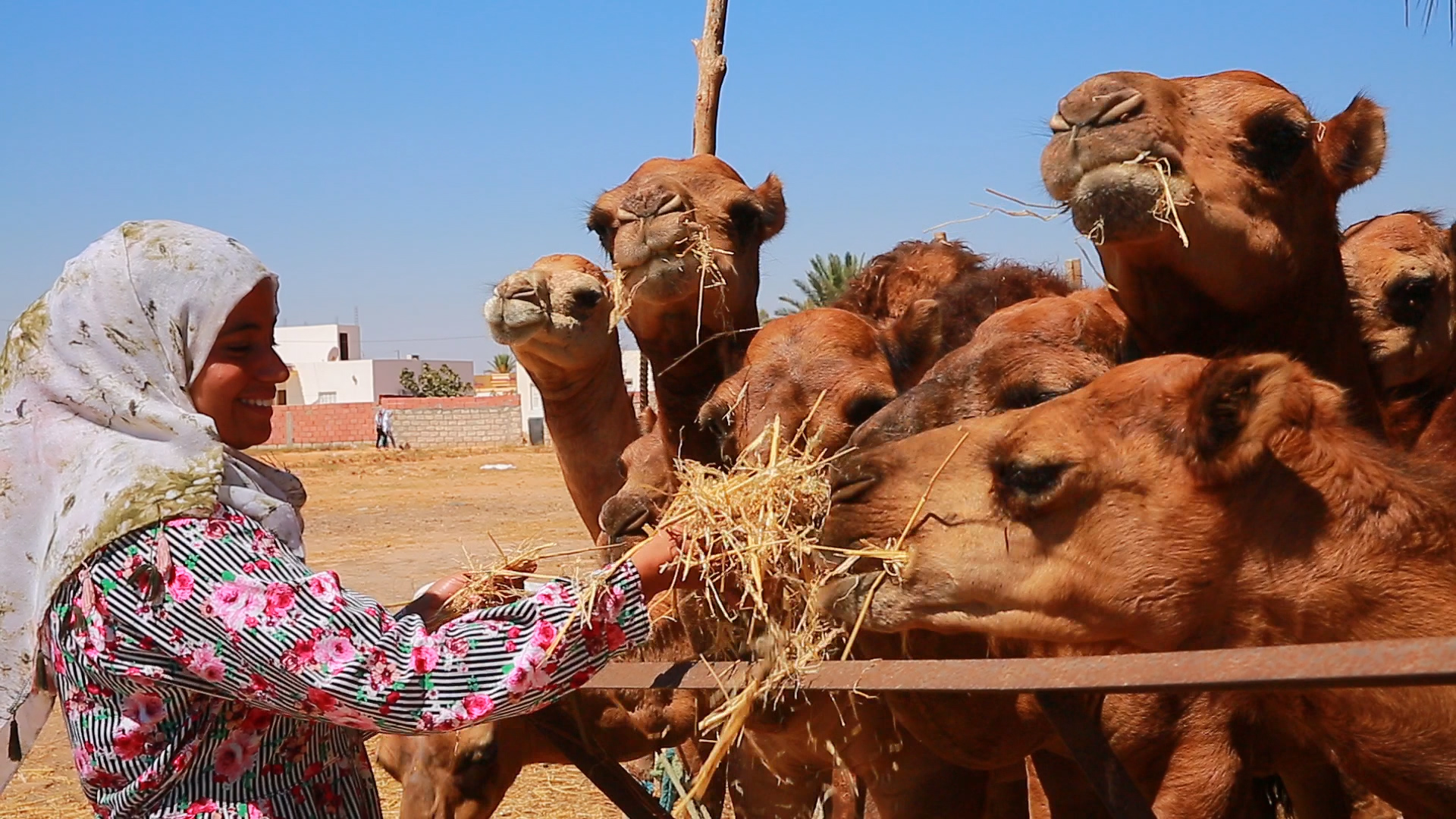 Benguerdane is a small town in the desert plain of El Ouara, a region in the extreme south-east of Tunisia, just a few kilometres away from the Libyan border. The climate there is forbiddingly arid, and the main source of livelihood is raising livestock like sheep and goats. It is also one of the areas targeted by the PRODEFIL project – a joint IFAD-EU effort helping Tunisia’s agropastoral systems become more resilient and creating opportunities for rural youth like Imen.

Imen Rezgui has always been active in civil society. She belongs to the Benguerdane retailers’ association, a group initially formed to combat illegal border trade but now principally engaged in fighting violent extremism. Nevertheless, like so many Tunisian youth, she struggled to find a paying job. At age 31, five years after earning a degree as an agroeconomic engineer, she was still unemployed. With her father killed in an accident just a few months after she’d earned her diploma, she was forced to stay home to look after her mother and four siblings – all of whom, like her, had degrees but couldn’t find work.

Things began to change in 2019, when Imen heard about the Support Fund for Project Holders, a PRODEFIL-financed programme dedicated to helping women, young graduates and professional organizations start or expand a business. She submitted a proposal for a camel-rearing business and, in February of that year, it was accepted. She contributed some of her own start-up money with a bank loan and family support, and the fund supported the rest.

Camel raising is traditionally an exclusively male occupation. In fact, on the day her proposal was accepted, Imen became the first woman camel farmer not just in Tunisia, but all of North Africa. So how did a young woman with no relevant experience succeed? Put simply, she was determined and tenacious. She had seen that a neighbour was earning a good living raising camels and thought, “Why can’t I?”

The path was strewn with difficulties from the start. Arabian camels are highly sensitive animals who become stressed at the slightest change, and their size makes them difficult to handle. There was no suitable feed available in the region, and veterinary training and safeguards were lacking. But Imen refused to be deterred. When she needed information, she looked on the Internet. When she couldn’t give her camels exactly what they needed, she hoped the emotional rapport she’d developed with them would buffer the worst of it.

Help arrived from PRODEFIL, too. The programme hired an experienced camel driver to visit Imen every month and give her technical support and training. Veterinary advice, although insufficient, was provided by a veterinarian working with the Regional Commission for Agricultural Development. The local farmers’ organization further contributed advice and local know-how, and helped Imen solve some of her problems. The programme purchased a good-quality feed concentrate intended for dairy cattle, and luckily, it was close enough.

The fattening phase of the camel-rearing process began in October 2019. After six months, her camels’ weight had increased from 85–120 kg to 150–300 kg – right on track with the guidelines published by the Arid Regions Institute. It took her only a week to sell them, in part because she advertised her camels on Facebook. And in selling them, she proved to be a tough businesswoman: she commanded a very good average price of 2,100 dinar (about US$765) per camel.

With the profit she earned, she was able to pay a salary to herself and two family members whom she’d recruited to help her. She was also able to put aside sufficient funds to buy a new group of camels to raise. But to hear Imen tell it, the real benefit lay in the experience she gained.

Encouraged by her recent success, and with her starting capital still intact, Imen is ready to continue her adventure. She has teamed up with her brother, who recently received a microcredit loan from another local organization, to launch another round of camel-rearing with about 40 young camels. She is also planning to upgrade her stables and equipment.

Imen’s achievements are now recognized both in her hometown and throughout the region. Neighbours, other young people, and even other camel breeders now ask her for advice. As a sign of gratitude, and in recognition of National Women’s Day in Tunisia, she was recently decorated by the Minister of Agriculture and the Tunisian Union of Agriculture and Fisheries as the best farmer in the Médenine area. She’s still a member of the Benguerdane retailers’ association, too.

As one of the first camel breeders in her region, she has introduced countless people to the practice, which had been almost unheard of in El Ouara. Two other young entrepreneurs have since followed Imen in submitting proposals for camel-rearing projects to PRODEFIL. They were recently approved.

But, whether or not she is aware of it, her actions have far deeper consequences. Against all odds, she has changed minds and opinions in a conservative environment. She is proof positive that a woman can succeed in a traditionally male field – and that anyone with the kind of courage and determination she displays can go far.