Roland’s workshop sits by the side of the road, a large wooden structure from which the sounds of a lathe and a hammer emerge from time to time. In the garden, two teenagers are stripping dried palm leaves into fibre, which a woman is wrapping around a knife handle. Inside, there’s a forge at one end, and the fire is lit – but the brightness of the room is from the wide gaps in the wooden walls, which let the light in, and the heat out.

This workshop is in Duit, a village in the northern Philippine mountainous province of Ifugao, where Roland Bongtiwon has been a blacksmith since 2006.

Despite being well-known for the rice terraces of Ifugao, a UNESCO World Heritage Site, which attracts tourists from all over the world, the province remains one of the poorest in the country. The Human Development Index is 0.483, on par with Haiti.

The two-lane roads that connect the towns and villages scattered across the irregular landscape are always in need of maintenance, and it’s not uncommon to see minibuses being repaired by the roadside, outside mechanics’ make-shift shacks. Entrepreneurs and skilled workers are few and far between here, due to the limited market in their communities and the challenges in overcoming geographical limits.

In this respect, Roland is an exception. When he started as a blacksmith, two government departments had helped him acquire space and materials. He was able to employ five workers who helped him make traditional tools that they sold in the area.

In 2006, IFAD launched the Rural Micro Enterprise Promotion Programme to provide some respite to the poorest provinces in the Philippines. It was designed to assist micro-entrepreneurs and poor rural people who stood to gain jobs from the development of rural microenterprises, ensuring the inclusion of women, youth, and indigenous people. The Government’s Department of Trade and Industry implemented the programme by providing people with loans, training, developing new and improved products, and providing market linkages.

In describing the programme, Omer Zafar, IFAD’s Country Programme Manager for the Philippines, also highlighted its targeting strategy, “It was instrumental in enabling us and the Government to reach poor rural people who we could not get to only through agriculture, but still needed support. These people wanted to develop new businesses, or to find jobs, but in those conditions it was almost impossible. ”

Roland took part in two steps. Firstly, he and his wife were linked to a specialist, who helped them develop new designs for the tools. Once they had made the tools, Roland was provided transport, board, lodging, and sponsored for all other expenses he incurred during two trips he took to Manila, the country’s capital, where he showcased his new tools at trade fairs. 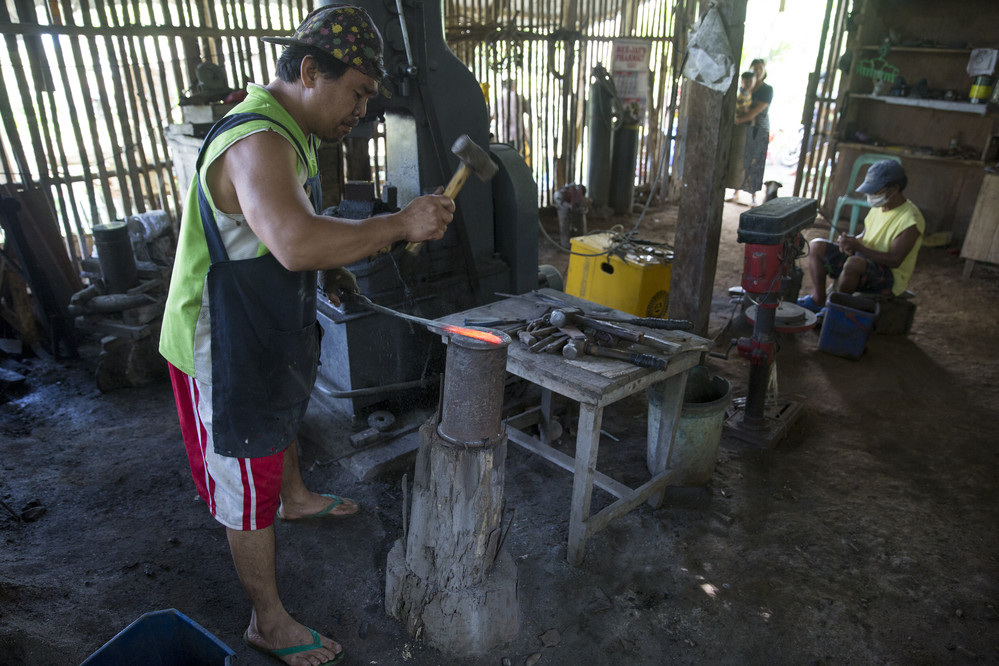 The strategy was a success. Roland’s tools sold well, and he has since been receiving a constant stream of orders from outside the region – he is now in the process of ramping up production to fulfil demand coming from both within and outside the province. Since he’s so busy making tools, he doesn’t have the time to deliver them so far, but his customers like them so much that they pay for him to send them over as well.

Thanks to the skills they learnt through him, four of his previous employees set up their own businesses, so Roland hired two new workers and his two children, who have specialized in their own tools. Thanks to the money they earn, they are now able to pay for their education. His wife is also helping out at the moment to cope with the amount of orders they have received.

He also rents out space and tools to others: “Since there are other people who work here, I collect fees from them, to cover for maintenance and other expenses”.

The assistance that has been given to Roland has paid many times over – it has resulted in the establishment of four new businesses, the creation of additional jobs, and ensuring that a couple of teenagers stay in school longer. All this in one of the poorest areas of the country. The programme also provided an opportunity for the government departments involved to work together on common issues and the results are very promising for the future.

Roland is more a man of action than of words, and he chooses his words carefully when speaking in Ilokano, his local language. As he succinctly puts it, “Thanks to IFAD I was able to expand my business and help my community”.