Rural poverty has been decreasing in Peru over the last decade, although it is still affecting 42 per cent of people living in rural areas. However, the resilience of smallholder farmers, coupled with the support of development projects is allowing Peru’s rural people to progress towards better living standards. Women and youth are very often on the frontline of that effort.

They know these issues all too well in the sierra around Lima. Langa is a small town some 80 kilometres away from Peru’s capital. You get here after a three-hour ride along a dirt and winding road that takes you from the coast to almost 3,000 meters above sea level. The dusty streets a stark contrast to the colourful avenues of Lima’s chic neighbourhoods.

“The many challenges we face here, mainly due to lack of water, made people to migrate to Lima, but this is starting to change,” says Mayor Miguel Castro.

The reason behind the change are the results of the Strengthening Local Development in the Highlands and High Rainforest Areas Project (in Spanish, PSSA), funded by IFAD and implemented by Peru’s Ministry of Agriculture. It has allowed the community to build up some small dams, set up technified watering systems and develop investment plans.

Yensi García, came back from Lima some months ago. He had gone to the capital looking for a future he did not see possible in Langa, but the chance of taking part in an investment project made him come back. Support from the PSSA project has allowed Yensi and his nine partners at the Cerrito de San Bartolo Productive Association to set up a guinea-pig farm.

While these cuys, as they are known in the Andes, are considered lovely pets in Western countries, their meat is a delicacy across the Andean region. Wearing his serrano hat, Yensi speaks proudly about investments, business plans and how they handle the cuys. “Thanks to the project, cuys are becoming our main business”.

Yensi’s experience is similar to Jazmín Salsavilca’s. Mother of a five-year-old, Jazmín, migrated to Lima to work as a seller. She came back when she learned that funds from the project would allow her and other members of La Granja de Langa Livestock Producers Association to set up a cuy farm.

Over the last few months, they have built two sheds where they have already bred 400 guinea pigs from the 100 they initially bought. The farm has already had positive effects on Jazmin and her colleagues’ households. “Our income has improved by around 15 per cent, and that extra money gives us the chance to improve our children’s education.” 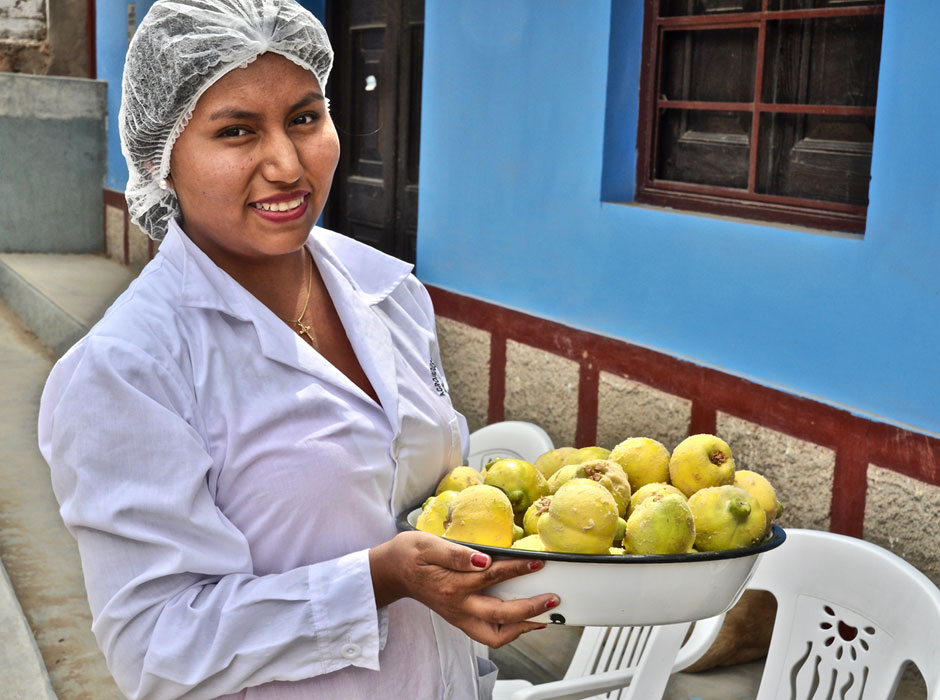 Gloria Hermoso is one of the leaders of Membrillo Santo, a small company set up a couple of years ago to produce quinces in one of the fertile valleys surrounding Antioquia, a small town around 70 kilometres away from Lima.

They were doing all right, but now they are doing much better since the project helped the group to set up a technified irrigation system and provided training to improve farming techniques.

“Everything has changed,” says Hermoso. “Before, we could water only every 45 days. Now, with our reservoirs and our new irrigation systems, we are making almost five times the money we were making before.”

In the small town of Cochahuayco, close to Antioquia, Marina Sáenz receives visitors at the tiny but tidy warehouse that serves as the headquarters for the Santa Ana de Cochahuayco Agroindustry. Marina speaks like a businesswoman and is the alma mater of this 11 partner company (six women and five men, four under 26).

Funding from the project has allowed them buy equipment to produce nectar, fruit-filled chocolates, vinegar, cider, jam and other products as a way to add value to the fruits they grow.

The partners overcome countless difficulties on a daily basis. Though only 70 kilometers away from Lima, Cochahuayco suffers from a lack of public services, affecting most of Peru’s rural areas. Electricity arrived just a couple of years ago and power cuts are frequent. Phone signal is very poor and a decent Internet connection is impossible.

Nevertheless, it is hard to stop determination. “Orders can be placed on our Facebook page.” But didn’t you just say that you don’t have Internet here? “Well, as soon as someone goes to Lima they get on the page and we catch up with commissions”, says Sáenz.

The next step? “Exporting to Europe”.