Mosammat Karfunnesa, 50, left and her husband, Kaptan Mia, in their tree nursery in Sikandarpur village, in north-eastern Bangladesh. ©IFAD/Farhana Urmee

When Mosammat Karfunnesa, 50, was raising her four sons in rural Bangladesh, she could not afford to send them to school. She did not earn her own income and her husband, a rural laborer, was often unemployed. For years, the family struggled to cover basic expenses and often went hungry. But despite these challenges, Karfunnesa never gave up on wanting to make a difference for her family. Rather than migrate to the city like so many in her village, Karfunnesa was determined to build a future for her sons in the countryside. The question was how?

“I wanted to change the course of the fate of my family,” said Karfunnesa, who lives in Sikandarpur village, an area in north-eastern Bangladesh mostly made up of “haors” (vast wetlands) that are flooded during the monsoon season.

The story of how Karfunnesa changed her family’s “fate” offers a good example of the significance of this year’s World Food Day (16 October) theme: “Change the future of migration. Invest in food security and rural development.”

Three-quarters of the world’s poorest people live in rural areas and rely on agriculture or other rural activities to earn a living. Creating conditions that allow rural people like Karfunnesa to stay at home and thrive, is a crucial component in any plan to tackle the migration challenge.

Karfunnesa’s home country, Bangladesh, is a good example of a place where investments in rural development are having a direct effect on how people living in rural areas view their future. But the challenges are steep.

Two-thirds of Bangladesh lies at less than five meters above sea level, making it one of the most flood-prone countries in the world. Severe flooding during a monsoon often causes damage to crops and property, and negatively impacts rural livelihoods. Flooding has become even more intense and unpredictable in recent years, in some cases ruining crops before they can be harvested.

Bangladesh is also one of the most densely populated countries in the world. Despite economic and social gains over the last 50 years, it remains a low-income country with substantial poverty, inequality and deprivation. About 50 million people (31.5 percent of the population) live below the poverty line. Although agriculture contributes less than 15 percent of GDP, the sector still employs 47 percent of the labor force.

Although Karfunnesa thought differently, for many people in rural areas, migration is seen as a viable option to escape from poverty and a lack of employment opportunities.

In the first five months of 2017, Bangladesh was the largest single point of origin for migrants arriving on European shores, according to the International Organization for Migration (IOM), with 7,106 Bangladeshi citizens (mostly adults) arriving by boat.

Karfunessa’s life began to change when she participated in the IFAD-funded Haor Infrastructure and Livelihood Improvement Project (HILIP). The project was designed to improve rural people’s ability to earn an income by providing access to vocational training and small loans to create income-generation activities. The project also invested in road improvements so that local people were not stranded following periods of heavy flooding. 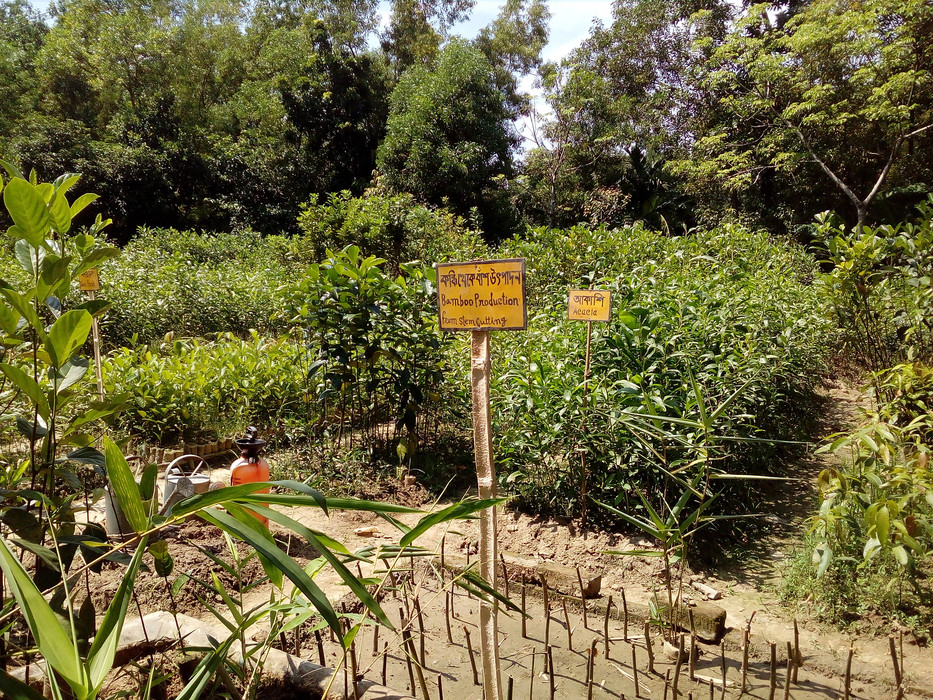 In 2015, Karfunessa was one of 25 participants that received training to learn how to set up a tree nursery. After completing the training, she requested a small loan through the project and, combined with her own savings, was able to purchase a piece of fallow land to set up a small nursery. She sold over 12,000 saplings in her first year and almost 16,000 young trees in 2016.

Today, Karfunessa employs five people and her nursery grows eight varieties of fruit trees and four kinds of timber trees. The income she generates not only  contributes to her family’s food security but to the community’s food security as well, she believes.

“It would not have been possible had I not been trained in the nursery business,” said Karfunnesa.

Locals say that Karfunnesa’s success has inspired a movement in the area. People are eager to plant fruit and timber trees due to the availability of quality saplings.

“Karfunnesa is an example. She has shown people how to become self-reliant,” said Gopal Chandra Sarker, HILIP project director. “I hope Karfunnesa’s story will inspire many.”

Karfunnesa’s story, as this World Food Day theme suggests, is a testament to the power of investment in rural areas. Karfunnesa built a successful business that can withstand the negative effects of climate change and provide her with a steady income. Today she is not only paying for her grandchildren’s education, but she is building a new home with the money she is making from her tree business. As a result, she has more confidence and her opinions are valued.

"I have been doing household chores for my entire life and never had any money in my hand. Now that I earn money through this nursery, my husband and my sons value my opinion. My husband, Kaptan Mia, is a constant helping hand for me in the nursery. I hope that by seeing this my grandchildren are learning the lesson of being self reliant," said Karfunnesa.

“I am not going to leave under any circumstances,” added Karfunnesa in thinking about her future. “I will live here.”