For over 10 years, Fadieh and her family have been cultivating olive trees on a small plot of land in Alfayha, a small village in Jordan’s Madaba Governorate. The olives and olive oil they sell are a crucial part of the family’s monthly income, as her husband’s pension, a monthly sum of only 360 Jordanian dinar (about US$500), isn’t enough to make ends meet.

Growing olive trees in Jordan, one of the driest countries in the world, isn’t easy. On a typical day, 53-year-old Fadieh, her husband, and their four children each spend hours tilling the soil and tending to the trees. But perhaps the single most demanding task is keeping the trees properly hydrated. Until recently, the Almaaya family supplied their olive grove with water stored in large tanks that had to be manually topped up twice a week. And because water is so scarce in Jordan, it’s expensive, too. The family had to spend about 450 dinar (US$635) per season on water alone – a steep cut into their agricultural profits.

The Almaaya family’s experience is similar to that of many others. Rural Jordan is home to about 800,000 people, many of whom rely on small-scale agricultural production as a significant source of income. Yet making a decent living off of agriculture remains a challenge. In addition to the chronic water scarcity, many of the area’s natural resources are degraded, due partly to the effects of climate change and partly to influxes of refugees from nearby areas of conflict. Agricultural yields remain low, keeping sales low as well. Despite widespread agricultural practices, the agriculture sector still makes up a mere 5.6 per cent of Jordan’s GDP, and poverty rates in some areas are as high as 17 per cent.

IFAD’s work in Jordan is focused on increasing the agriculture sector’s contribution to national GDP by expanding job opportunities and empowering rural people – especially women and youth – to turn their farming activities into sustainable, profitable small businesses. To reach these goals, programmes active in the area focus on helping small-scale farmers become more resilient to the effects of climate change and other risks to their production, as well as on facilitating access to financial services and markets. 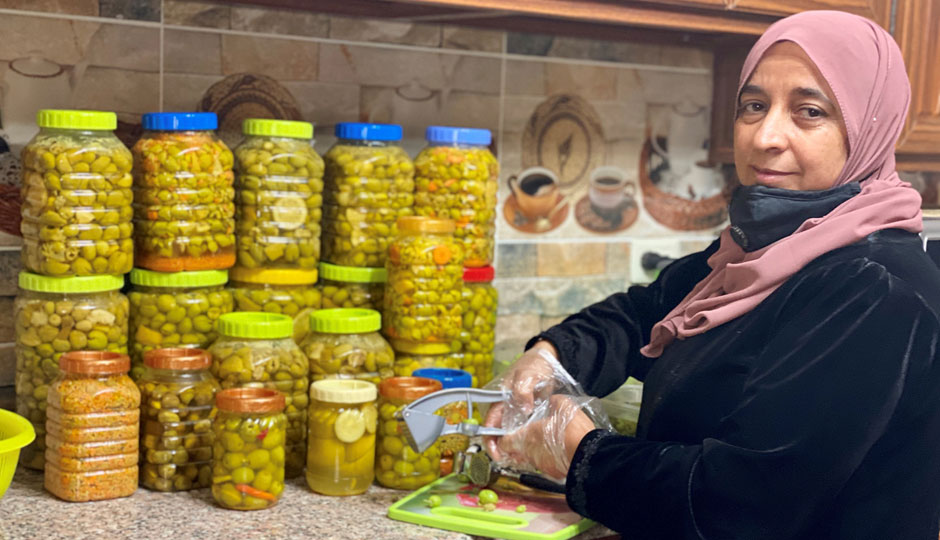 The IFAD-supported REGEP project, launched in 2015, was the first of its kind to use this approach. One of its key strategies involved collaborating with the local Jordan River Foundation to establish Savings and Credit Groups (SCGs). These groups allow members to access financial services – in particular, lines of credit – that previously would have been out of reach. Members also receive mentorship and technical support on a variety of topics, including financial literacy and management, developing and implementing business plans, enhancing the quality of their products, improving their marketing skills, and establishing connections to local and regional markets.

Given the scarcity of water in Jordan, the project focused on helping small-scale farmers introduce water-saving technologies such as irrigation systems. Upgraded methods like these help save water and make farms more efficient, increasing their yields and their profits.

In 2019, REGEP reached out to Fadieh and invited her to become part of an SCG with 15 other women. When she got the opportunity to apply for a grant, she took it right away – she knew exactly where she wanted the money to go. The project helped her prepare an application, and before long, she was awarded a grant of 2,124 dinar (about US$3,000). She used it to install an on-farm drip irrigation system on 1.5 dunum (0.15 hectares) of her olive grove.

Right away, Fadieh and her family were able to begin saving time, money and energy. The new irrigation system is much more efficient, allowing them to fill the water tanks only once per week instead of twice. They’re also spending less on water, especially during the growing season. Their costs have been reduced from about 450 dinar (US$635) to 150 dinar (about US$210) per season.

Meanwhile, the family’s agricultural production has increased, due to both the improved irrigation and the technical support provided by the project’s Farmer Field School (FFS). With REGEP’s support, Fadieh has received training that have helped the family increase their olive crop by 20 per cent and their olive oil production by 55 per cent. During the most recent growing season, they produced 352 kg of olive oil, generating 1,870 dinar (US$2,638) of income.

She also found reliable markets nearby, selling on demand to schools, banks, and oil processors in her village and in neighboring areas.

“I have been able to reduce my consumption of water and energy and still maintain the right level of humidity for my plants,” she says. “I am happy to be able to both increase my production and at the same time save water and energy.”

Recently, Fadieh has expanded her business into preserving and pickling foods. She’d heard that other local women had attended FSS trainings on food preservation, and that they were finding it a valuable addition to their own businesses, so she took the training as well. After the 2019 growing season, she set aside 50 kg from her olive crop and pickled it using the methods she’d learned. Soon, she sold it for a profit of 250 dinar (about US$350).

The gains she’s experienced in efficiency and production have done more than just increase her profits – they’ve allowed her to improve her family’s living conditions. They’ve also brought her a boost in confidence.

It is this newfound confidence, perhaps, that helped her face the constraints brought by the pandemic. Fadieh tells us that, compared to the 2019 season, the 2020 season was a challenge. Due to the COVID-19 safety measures implemented by the Government of Jordan, she was only able to sell about half of her crop. Nevertheless, she’s already begun seeking alternative ways to sell her products. As the months have gone by, she’s begun exploring online spaces as a way to continue her business. Along with a group of other local women, she’s a part of a WhatsApp group dedicated to marketing their preserved foods. They’re committed to exploring other online markets as a group, too. Despite the challenges that remain, Fadieh and her fellow REGEP participants are not to be deterred.